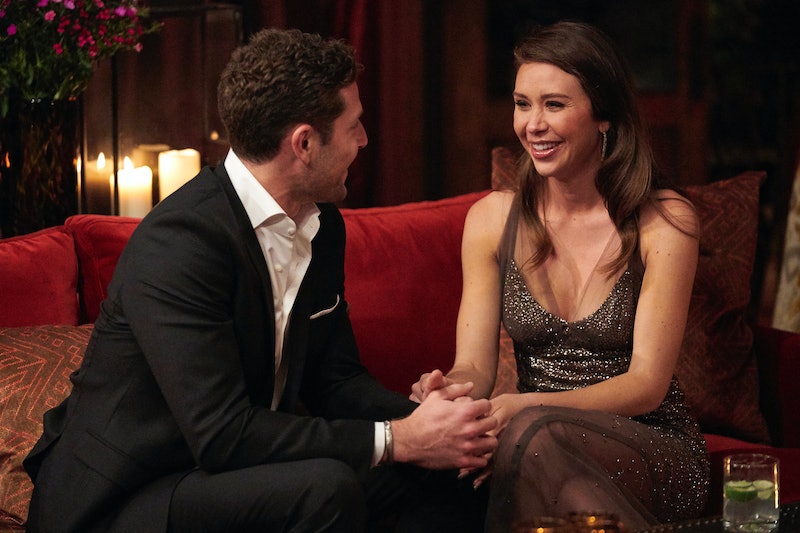 Spoilers for Season 19 of The Bachelorette. The latest season of The Bachelorette has already had its fair share of twists and turns, but Episode 3, which aired on July 25, proved to be a complete course correction. After being the subject of several clunky rejections, Gabby, as well as Rachel decided to switch up the procedure of the season. At the Episode 3 rose ceremony, the men were made to pick which woman they were committing to for the rest of the season. The change led to a couple men rejecting roses from the leads, but it also helped to clarify which men were there for which women.

In the case of Gabby, it meant that her and Jason Alabaster’s potential love story was finally underway.

In Episode 4, which aired August 1, the group jetted off to Paris. There, Gabby and Jason were bound for a romantic outing in the city of lights. The couple began strolling around Paris, giving viewers at home a deep feeling of wanderlust. “This could really be the start of the rest of our journey,” said Gabby, before explaining that she had hoped Jason could come out of his shell — and what better way to do so than by trying on berets! They continued with their afternoon, riding carousels and drinking red wine, “there’s something about him that makes me feel really at ease,” Gabby told the cameras.

When it came time for their dinner date, it appeared that the pair needed to do some healing. Despite their upbeat day, their conversation quickly turned introspective, as Jason explained exactly why he is so reserved. “I always felt like I wasn’t good enough,” he said. “I took everything personally, I kept it inside. Years and years of that.” When it was Gabby’s turn, she spoke about her estranged mother, and how their relationship had deteriorated over the years.

Where the duo really bonded was their utilization of therapy, and how their personal processes had allowed themselves to receive love, and understand, as well as cope with what they’d missed in their childhood.

“This is all the validation I need,” Gabby said. “It feels really good to know that he’s on the same life path as me. I see a lot of myself in Jason.” The couple then made their way outside and began smooching with the Eiffel Tower shimmering in the background. While holding the rose, she told Jason: “I don’t want to just give you a rose. I want to give you the belief that this will go somewhere.”

As the sequence came to a finish, a tearful Gabby told cameras, “I never thought I would be able to deserving to find someone, I just can’t believe I’m so lucky.”

Rumors That Jason Is In Gabby’s Final Four

As is the case with any season of The Bachelorette, rumors are bound to begin swirling before the season even hits our screens. Season 19 was no different. In fact, the speculation about Gabby’s final men has been out in the public ether for well over a month, thanks in large part to reality television blogger, Reality Steve. Now, obviously nothing can ultimately be substantiated until we reach the season’s end, but according to the rumor mill, Jason is one of Gabby’s final four.

It doesn’t necessarily mean he makes it beyond hometown dates, nor does it mean he’ll get down on one knee, but from what we can glean, there’s a pretty good chance Gabby will be going to meet his family.

Speaking of hometowns, we’ve already mentioned that Gabby will be making her way to meet Jason’s family, and we know as much because we’ve seen as much. Even though James is a resident of Santa Monica, California, he actually comes from the Bayou State, aka, Louisiana. This spoiler comes courtesy of Reality Steve — surprise, surprise — and features some video evidence of Rachel and Jason galavanting around Jackson Square, kissing, and chucking beads off of balconies in typical New Orleans fashion.

Again, this doesn’t ultimately mean the two are destined to tie the knot, but it’s certainly a good sign for their future considering all the buzz about their alleged hometown is positive.