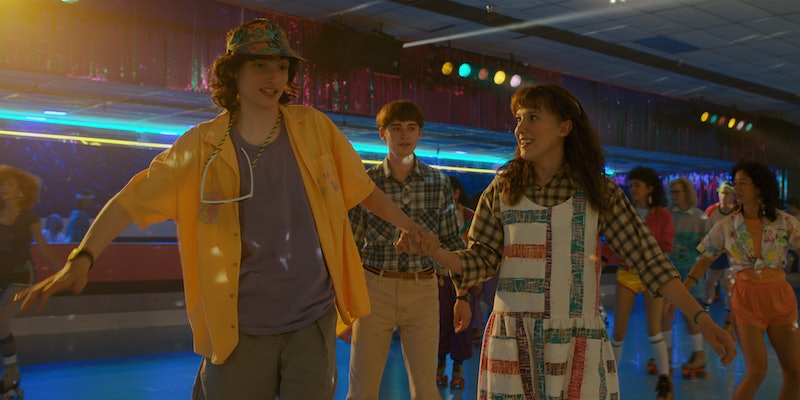 Featuring a remix of Journey’s “Separate Ways (Worlds Apart),” the Stranger Things Season 4 trailer teased another soundtrack packed with ’80s hits. Though the band’s 1983 hit isn’t featured on the Stranger Things soundtrack, there are plenty of other appropriately timed songs from artists ranging from The Beach Boys and Kiss to Kate Bush and Dead or Alive. What’s more, music becomes an integral part of Season 4’s 1986-set storyline, as the Hawkins crew discovers that certain music can even have life-saving abilities. Two songs, in particular, got major moments this season — Bush’s “Running Up That Hill” featured prominently in Volume 1 as the one thing keeping Max Mayfield (Sadie Sink) safe from Vecna, and, in Volume 2, Metallica’s “Master of Puppets” was played by Eddie Munson (Joseph Quinn) on guitar as part of the Hawkins gang’s plan to destroy Vecna.

Like the Netflix series itself, the Season 4 soundtrack is dropping in two digital parts on May 27 and July 1, with Sony Music’s Legacy Recordings releasing the complete Volumes 1 & 2 versions on CD and cassette on Sept. 9. The label previewed the “conceptualized” Duffer brothers-produced compilation as including “key music covering various classic eras and styles” as featured in the show.

“I try to kick the creative levels up a notch each season because I don’t want to ever feel too comfortable or become too complacent by relying on music I’m already familiar with,” music supervisor Nora Felder told Billboard in 2019, explaining that they “try to use songs that came out with the year” each season takes place. “The good news is that with each new season comes another year of songs that we get to rediscover.”

Below is every song from Stranger Things 4, Volumes 1 and 2, with the official soundtrack entries in bold.

“Object of My Desire” — Starpoint

“I Was a Teenage Werewolf” — The Cramps

“Play With Me” — Extreme

“Got Your Number” — The Lloyd Langton Group

“You Spin Me Round (Like a Record)” — Dead or Alive

“Wipe Out” (K-Tel Version) — The Surfaris

“Diamonds and Emeralds” — The Interior Castle

“In Transit to Bermuda” — Dorian Zero

“Dream a Little Dream of Me” — Ella Fitzgerald & Louis Armstrong

“March of the Defenders of Moscow” — The Red Army Choir

“Dream a Little Dream of Me” — Ella Fitzgerald & Louis Armstrong

“Up Around The Bend” — Creedence Clearwater Revival

“Dream a Little Dream of Me” — Ella Fitzgerald

“Spellbound” — Siouxsie and the Banshees

“Every Breath You Take” — The Police

More like this
'Stranger Things' Season 5 Will Echo Season 1 In A Key Way, The Duffer Brothers Confirm
By Kadin Burnett and Sophie McEvoy
An Ultimate Guide To The Music Of 'Rap Sh!t'
By Brad Witter
‘Stranger Things’ Stan Megan Thee Stallion Grilled Natalia Dyer About Nancy & Steve
By Brad Witter
Does The 'Echoes' Ending Mean There Will Be A Season 2?
By Kadin Burnett
Get Even More From Bustle — Sign Up For The Newsletter

This article was originally published on May 29, 2022