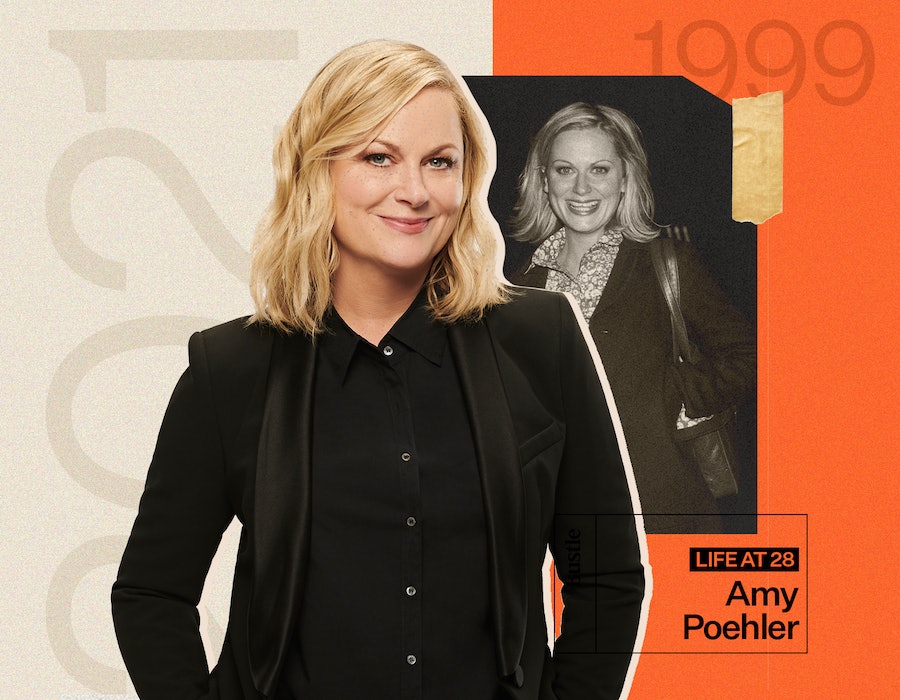 Amy Poehler loves giving advice so much that she's used to doing it professionally, both as a mentor to Broad City creators Abbi Jacobson and Ilana Glazer and as the creator of Smart Girls at the Party, an educational YouTube channel for young women. But she's learned to check in before doling it out.

"My goal as I’ve gotten older is really only give advice if asked. And once you realize that, you realize no one ever really asks for advice," Poehler muses on the phone from Los Angeles. "They just want to talk to you about what they're thinking, what they want to do — they want to figure things out on their own." It's an ethos she took to the set of her new Netflix film Moxie, which chronicles shy high schooler Vivian's (Hadley Robinson) attempts to upend the patriarchal status quo with inspiration from her mother's riot grrl past. But despite playing a mentor-like role among the young cast — both in front of the camera as Vivian's mother and behind it as Moxie's director — Poehler says the learning on set went both ways.

"I'm incredibly inspired by them," she says. "I think it’s really important to stay flexible and open [and] not to assume that you’re somehow smarter or wiser or have the answers just because you have some years ahead of people."

Perhaps this is Poehler, 49, putting into practice the main advice she says she would give her 28-year-old self, which is that she wouldn't give her any at all. "I would try to stay out of my way, I think," she says. "Because from 28 'til now, so much incredibly important, wonderful, and difficult stuff has happened, and I wouldn’t want to change anything. I would have that Back to the Future feeling that if I changed one thing I’d suddenly be marrying my own mom or whatever!"

Poehler turned 28 in 1999 — "We were all worried that the ATM machines wouldn't work once the year turned 2000!" she jokes — and while it would be two more years before she showed up at Studio 8H to begin what would become an eight-year stint on Saturday Night Live, her career was already on an upward trajectory. Her improv troupe Upright Citizens Brigade, which she founded with fellow comedians Matt Walsh, Matt Besser, and Ian Roberts, was a staple on New York's alternative comedy scene and had just opened its own theatre; Season 2 of their self-titled sketch show was airing on Comedy Central. Below, Poehler talks hanging out at Sopranos star Michael Imperioli's bar, getting paid $300 to do a bit on Conan, and smoking cigarettes indoors with Bradley Cooper before New York City's smoking ban.

New York City in 1999 was really something else. It was still a place where you could walk down the street and see Lou Reed buying a newspaper in the East Village. It was before the horrible attacks of September 11 really changed the city in so many ways. I had moved to the city about three years before, so I had finally felt like a real New Yorker. I lived in the East Village, I believe I was on 1st and A. I knew where to go get my coffee, I knew which was the best laundromat, I knew the subway system somewhat. Very fond memories of that year.

At the time you had just opened up the UCB Theatre on 22nd street. What was the hardest part of that?

At the time we were shooting our Comedy Central show, and we were writing it and producing it and acting in it. [It was] just these crazy long days for very little money, and we were very happy to do it. And then we were performing [at the theatre] at night. It was a really magical time, frankly, because we were finding our family and performing and getting to do what we wanted to do. Because you know when you’re 28, sometimes you’re making this decision which is, do I want to choose security and pick a job that I hate, but it’ll give me life insurance and a house? Do I want to choose security and marry somebody that maybe I’m not so sure is the right person for me? There’s a big moment where you have to decide: Do I want to pick security or do I want to follow my passion?

You chose passion, and it was working out! You had a TV show and the theatre, and two years later, you'd join SNL. At the time, did you see SNL in your future?

I think I did, somewhere in the back of my head. I don’t remember feeling that [at the time], but then my parents would remind me 20 years later like, “Remember you used to say you were gonna be on SNL?” and I was like, “I did?!” I had visited New York for the first time when I was 13 with my high school classmates and we took the NBC tour. I’d grown up being a huge fan.

In 1999 I had some friends that were working on the show, I think Tina [Fey] was already there, [Rachel] Dratch was there, Horatio [Sanz]. I think I had probably gone to a party or two, so maybe it felt closer [to being a reality] than when I was growing up in Massachusetts.

What did a typical Friday night look like when you were 28?

Maybe it wasn’t as much of a rager and I’d like to think it would be. It would probably involve performing somewhere with friends and going to a bar after.

Do you know what I remember? I was an occasional cigarette smoker — I didn’t smoke a lot of cigarettes, but like every 28-year-old, I did on occasion — and I remember very vividly, there was a restaurant called Ciel Rouge, French for "the red curtain." It was in Chelsea, and it was owned at the time by Michael Imperioli from The Sopranos. Everybody would smoke there. And I remember everybody talking about the smoking ban being like, “There’s no way this is gonna happen. There’s no way this is gonna last. In New York City, you’re not gonna be able to smoke inside? That’s insane!” And then slowly bar owners, club owners, would be like, “You have to smoke outside,” and everyone would be like, "WHAT! New York will never let this happen!"

So I was probably smoking inside. There was a bar near UCB called McManus, which [felt] kind of familiar, because it felt a little Chicago-esque with its paper tablecloths and its french fries, and that was a place where we hung out a lot. I wasn’t cool enough to be plugged into any kind of incredible scene, but the sketch comedy and improv comedy scene is its own gang of weirdos.

I remember the New Year’s Eve party — we did have a New Year’s Eve party when it turned the year 2000 at UCB, and I do have somewhere some picture of me and Bradley Cooper dancing on the stage of UCB, both with cigarettes in our mouths. That maybe summed up that part of my life.

It was! And so is this time. Every time you’re alive, Saturn is spinning around you, you’re doing OK.

Was there a moment in your career where you felt like you made it?

It’s so relative. Early on when I would do bits for Conan, he used to have this bit called Staring Contest, him and Andy [Richter] would be in a staring contest and crazy stuff would happen behind their shoulders. And I just did a bunch of stupid stuff and characters. And I remember getting paid — if you just did a bit it was 300 bucks, and if you said a line it was like 500 bucks or something — and I can remember filling out the contract to get a little more money if you say a line. And I remember filling that out and being like, Holy shit, I’m getting paid to perform. That’s pretty cool.

Do you remember seeing yourself on TV for the first time?

The very first time I was in a chorus and we sang for a local morning show at Christmastime. And I remember a lot of kids fainting because they were really nervous and the lights were really bright. And I remember in my head being like, “Bitch, get it together, you have to be a professional. Unlock your knees and find that lens, this is important!” So I think maybe the camera panned across me at one point and that was exciting.

What was one of the biggest things you learned at 28?

I probably thought I knew more at 28 than I think I know now. I think the older you get, the more you realize how little you know, and how little things are certain. I think I was quite certain about things at 28 that I’m not certain of now and I don’t mind that. I think there’s an opening and a softening that can come if you keep trying to do some work on yourself. I think that would probably be the difference between then and now for me.

I hope my 28-year-old self would recognize my present self. I think she would be surprised by how much time I spend in Los Angeles now.

As an astronaut out here in 49-year-old space, I’m here to tell you that relationships only get better. I’ve met such incredible people, especially incredible women in my 30s and 40s. I've really settled in to the kind of person I wanted to be. You just start figuring out, really, if you’re going to be an architect of your own life, how you want each room to look. And when you’re in your 20s, you’re figuring out a lot of what you don’t want your building to look like. It’s a lot of, I don’t wanna do this, I don’t want to be that person, I need to get rid of this idea or this way of living or this system. And if you’re lucky, in your 30s and 40s you can then start building. And then in your 40s and 50s and 60s you get to live in a place that you’ve designed. That’s kind of the dream.

So I would say that there was a lot of fire and passion that I would really pat my 28-year-old self on the back for, but I would also let her know that she’s on the right path and good times are ahead.

More like this
At 28, Rosie Perez Risked Her Career To Stop Playing Stereotypes
By Gabrielle Bondi
At 28, Debra Jo Rupp Was Living A Much Different '70s Show
By Grace Wehniainen
Here’s What Happens To Bill & Frank In 'The Last Of Us' Video Game
By Brad Witter
Michael B. Jordan Tackled His "Public Breakup" With Lori Harvey On 'SNL'
By Brad Witter
Get Even More From Bustle — Sign Up For The Newsletter
From hair trends to relationship advice, our daily newsletter has everything you need to sound like a person who’s on TikTok, even if you aren’t.