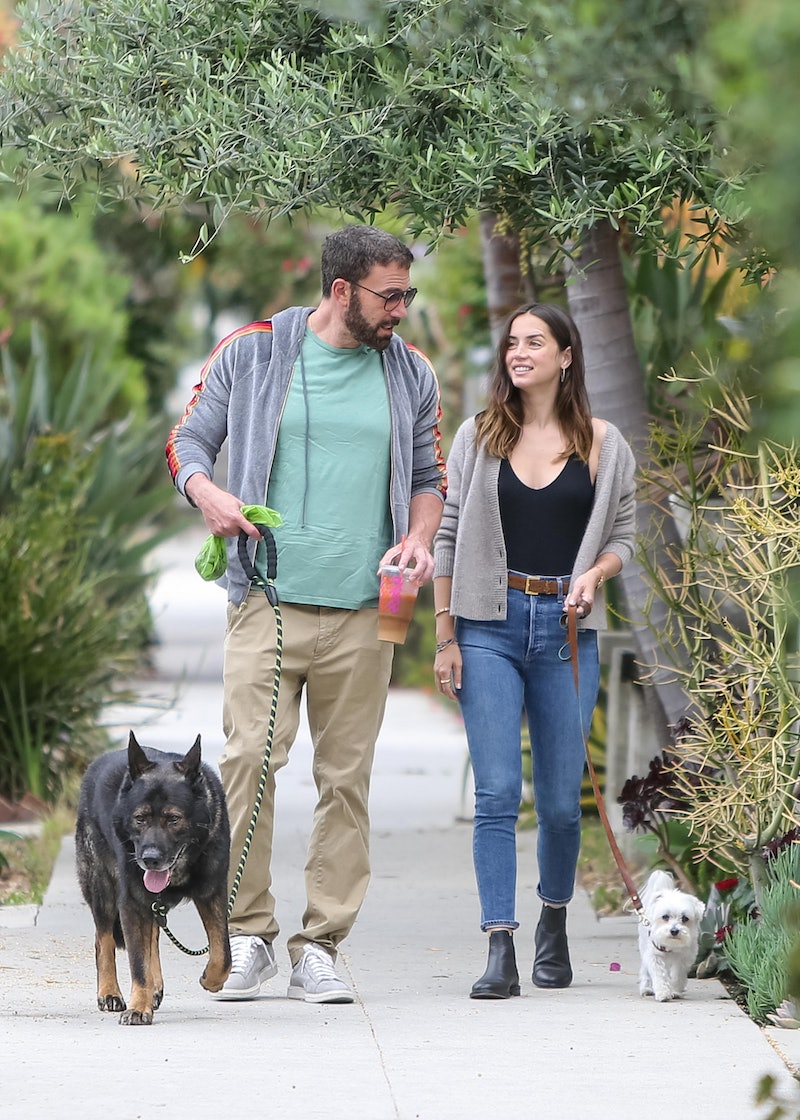 A necklace says a thousand words — or at least the internet thinks so. On Sunday, March 21, Ana de Armas took to her Instagram Story to share a selfie in which she was wearing a half-heart pendant. However, the actor’s followers were quick to notice that the necklace in the photo was the same one she wore while dating Ben Affleck last year, leading many to wonder if the two had rekindled their romance.

Shortly after sharing the photo, de Armas seemingly shut down any and all speculation that the two were back together by posting a black screen with the words “nope,” “no,” and “I don’t think so” all over it. The pair were first linked in March 2020 when they were spotted on a trip to Cuba, where de Armas is from. But after quarantining for several months together, news surfaced in Jan. 2021 that the couple had called it quits.

“Ben is no longer dating Ana,” a source told People at the time. “She broke it off. Their relationship was complicated. Ana doesn't want to be Los Angeles based and Ben obviously has to since his kids live in Los Angeles.” Another insider added that the breakup was both mutual and amicable. “They are in different points in their lives; there is deep love and respect there.” the source said. “Ben continues to want to work on himself. He has three jobs lined up and he’s a solid father at home. They are both happy with where they are in their lives.”

Despite reportedly moving forward in an amicable fashion, there appeared to be at least some bitterness following their split. Shortly after People reported that they had broken up, photos surfaced on the internet of a man throwing away a life-size cutout of de Armas in front of the Justice League star’s house. At the time, the unidentified man in the photos was believed to be Ben’s brother, Casey Affleck.

Soon enough, the images became a viral meme. “Omw to Ben Affleck's house to get that free Ana de Armas life size cutboard,” one person tweeted in response to the hilarious images. “please don’t just throw away a perfectly good Ana de Armas cut-out when there are so many families in need,” someone else wrote. Another person even called out Casey for allegedly trashing the item. “Casey Affleck throwing out the Ana De Armas cutout at Ben’s house is PETTY,” they tweeted.

Interestingly, Casey later denied disposing of the cardboard. “No, that's not me, and I can't even really say if they have totally broken up for good or whatever,” he told Entertainment Tonight. “I would leave that to them to speak to.” He also admitted that upon seeing the photos for himself, he was going to tweet out a funny response. “[But] then I couldn’t think of one and a joke didn't seem appropriate,” he said. “And I don't have Twitter so that wasn't going to work. But it definitely wasn't me.”

If the reports turned out to be true (which they did), Casey wanted the pair to reconsider their split. "I think that Ana is just the sweetest, funniest, smartest, most charming person,” he told the outlet. “I think she won't have any problems meeting somebody else." He continued: “I'll be there to carry Ben through it, but I don't think he'll have any problems [either]. My advice to them would be like, ‘Yes, think long and hard about it, because quarantine is not fun if you're single.’”

More like this
Who Is Nick Cannon Dating & How Many Kids Does He Have?
By Jordyn Tilchen and Radhika Menon
Khloé Kardashian Is Reportedly Dating A Private Equity Investor She Met Through Kim
By Jordyn Tilchen and Jake Viswanath
Gigi Hadid’s Dad Shared What He Knows About Those Leonardo DiCaprio Rumors
By Brad Witter
Justin & Hailey Bieber’s Relationship Is “Unbreakable” After Their Two Health Scares
By Bustle Editors
Get Even More From Bustle — Sign Up For The Newsletter