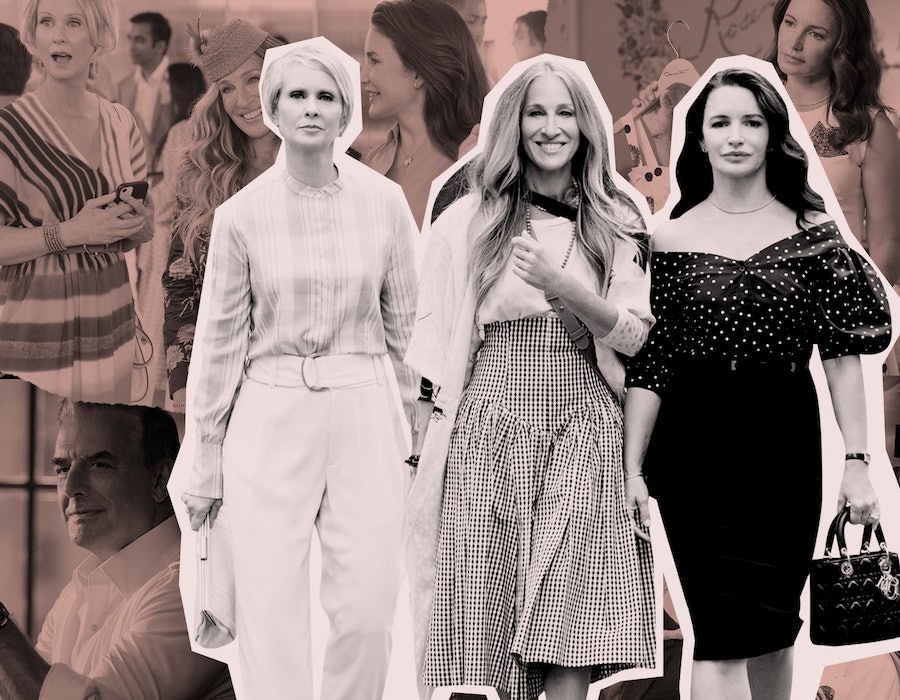 Major spoilers ahead for the Sex and the City reboot, And Just Like That.

At the end of season three of Sex and the City, Carrie makes a confession to her sweet, furniture building boyfriend, Aidan Shaw: she had been sleeping with the (married) Mr. Big behind his back. Carrie and a heartbroken Aidan break up…. temporarily.

About six or seven episodes later, Carrie realizes she made a mistake: she misses Aidan. She emails, calls, goes on an awkward sort-of-but-not-really double date with him, Steve and Miranda, and even though Aidan makes it very clear he does not want to get back together, and that Carrie broke his heart by cheating on him, love — or something resembling love — wins out. At the end of that episode, Aidan shows up at Carrie’s door and agrees to give it another go.

Pretty much immediately, it’s obvious that this relationship is different than it was the first time around. There’s no doe-eyed optimism or lovey-dovey period. Aidan is — rightfully — suspicious; Carrie is — indefensibly — defensive. Something had changed and broken in their relationship; the fundamental trust necessary for a working partnership had severed and neither was willing to do the work of repairing it.

It’s not bad. What it is a slightly slow-moving, self-aware meditation on growing older in a world you no longer quite understand.

In many ways, And Just Like That, the continuation of the Sex and the City universe feels like getting back together with an ex. It’s comforting to be with the same person again, yes, but you can’t shake the feeling that, this time, it’s different. Of course, there are the obvious textual differences, mainly that Samantha is gone, (“to London” apparently, and leaving all of the girls on read while she’s there. Their explanation, that Carrie fired her as a publicist and Samantha’s ego couldn’t cope, is ludicrous. Any Sex and the City viewer knows that Carrie could never afford Samantha, and that Samantha worked for her pro bono. And even if she didn’t, now that Carrie is married to one of the wealthiest guys in Manhattan, there’s no way she wouldn’t be able to afford Sam Jones. Plus, there’s no universe Sam wouldn’t come back for [redacted’s] FUNERAL. But, Kim Cattrall didn’t want to come, I get it, it’s fine.]

This version of Sex and the City is glossier and more cinematic. Carrie doesn’t begin episodes with voiceover, nor does she narrate the proceedings with her pun-laden commentary. More than Samantha, I think I miss Carrie’s voiceover most of all — it made Carrie seem like a friend, like we were in her head, that she was granting us an honest, sometimes self-deprecating look into a world of wealthy Manhattanites that maybe never existed. Carrie’s incredulity at some of the ridiculous things she experienced — fancy restaurants, elbow-rubbing with minor celebrities — made it all plausible. Without the voiceover, the fairy tale aspects of the character’s wealth is taken for granted.

Perhaps the name change should have been a tip off. Though it features (mostly) the same cast of characters, And Just Like That isn’t Sex and the City. The latter was frothy and unapologetic, a version of womanhood as understood through the pages of late ‘90s Cosmopolitan. The former, well, isn’t really a comedy at all. It’s not bad. What it is a slightly slow-moving, self-aware meditation on growing older in a world you no longer quite understand. The show rightfully addressed the lack of diversity in the original Sex and the City by introducing three new characters of color — one for each of our protagonists. But without Carrie’s column to guide us through their introductions, the effect is a little clunky (in the two introductory episodes, the most successful is Sara Ramirez’s non-binary Che, Carrie’s podcast host who’s able to hold her feet to the fire and go toe-to-toe with Miranda).

Maybe they’ll realize the puns were more fun than embarrassing, and that the voiceover is, sure, a little dated, but a way to get us onto Carrie’s side.

The entire time I was watching the first two episodes of AJLT, I wasn’t unhappy per se, but I was vaguely numb. The entire thing seemed, well, chaste, and with none of the “behind the red rope” glee that I experienced as a high schooler watching the original Sex and the City and imagining that being an adult was going on sexy dates to new restaurants with new strangers every week.

Sex and the City evolved throughout its first season: it began with “people on the street” interstitials, and Carrie talking straight to camera. It’s possible And Just Like That will evolve as well. Maybe they’ll realize the puns were more fun than embarrassing, and that the voiceover is, sure, a little dated, but a way to get us onto Carrie’s side, to welcome us into her world.

Or maybe I’m just older. Maybe, it’s like the old saying: you can’t go home again. The only way to move forward is to accept you can’t go back. I’m happy to enjoy And Just Like That on its own terms, even as I keep getting flashes of how much fun we had the first time around.

More like this
'Bridgerton' S3 Will Show A *Very* Different Side To Kanthony
By Sam Ramsden
Twitter Is Burning As Phoebe Dynevor Reveals Daphne’s 'Bridgerton' Exit
By Sophie McEvoy
Helena Bonham Carter Doesn't Think 'The Crown' “Should Carry On"
By Sam Ramsden
Everything To Know About The 'Daisy Jones & The Six' TV Series
By Maxine Harrison and Brad Witter
Get Even More From Bustle — Sign Up For The Newsletter
From hair trends to relationship advice, our daily newsletter has everything you need to sound like a person who’s on TikTok, even if you aren’t.