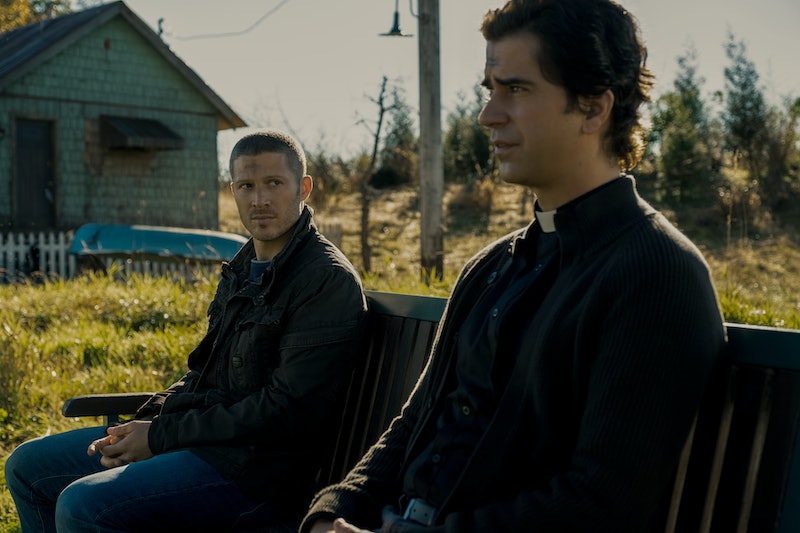 Spoilers ahead for Season 1 of Midnight Mass. For the first few episodes of Mike Flanagan’s new horror series Midnight Mass, the only evil is a generally gloomy mood on Crockett Island, a small fishing community whose waters were poisoned by an oil spill a few years prior. It isn’t until Episode 3, when it’s revealed the monsignor at the local church has been cavorting with an Angel who looks more like a demon that the inherent darkness of the story snaps into focus.

As we learn through the monsignor’s backstory, during a trip to Israel he was attacked by a creature he believes to be an Angel, who restored him to a younger — and apparently immortal — version of himself. He becomes convinced that he’s been chosen to enact God’s will, and that by drinking the Angel’s blood, he will be absolved from sin, similar to the way that Catholicism teaches that by taking communion — aka consuming the body and blood of Christ — your sins will be forgiven. Believing that he owes it to his parish to bring the powers back to the island, Father Paul begins sharing the Angel’s blood with the unwitting members of his church, healing their respective ailments and inciting other apparent miracles.

But of course, this all comes at a cost. From an outsider’s perspective, the Angel’s powers and appearance are openly vampiric, given that it feeds on human blood and burns in the sunlight. Yes, it can restore and make its victims immortal, but it also instills in them a rabid thirst for blood that begins to consume the town. How people perceive the creature — as a good or as an evil — depends on their religion.

As Riley explains in Episode 2, the church is a troubled symbol for him. He (and, it’s implied, others on Crockett Island) suspect that the devout Bev Keene has been misusing church donations over the years, or at the very least exploiting the town’s commitment to faith for her personal aims. “There’s no way to know for sure — [that’s the] Catholic Church in a nutshell,” he says. “All over the world, there’s these small, starving villages with big, fancy churches. Getting bigger and fancier while towns dry up; churches just poppin’ up like fat plump little ticks, suckin’ the town dry.”

Riley’s words echo throughout the season, becoming literal in the form of the Angel as it sucks and bleeds its victims. Worse yet, its actions are welcomed and encouraged by Father Paul, who believes he is doing the Lord’s work. What Midnight Mass shows over and over is that any good the church does is corrupted by those who co-opt the mission for misguided, nefarious purposes.

The show is careful to balance out its criticism of the church — not everyone succumbs to the seduction of the “Angel,” nor does everyone let faith blind them to the hurt and havoc it wreaks. Riley — whose belief in a higher power was shaken long before the “Angel” arrived — wholeheartedly rejects the creature, while Bev Keene embraces it as a messiah. It’s in the individual distinction that Midnight Mass is at its strongest, reflecting how faith (or a lack thereof) can color what we see as a gift or a curse.