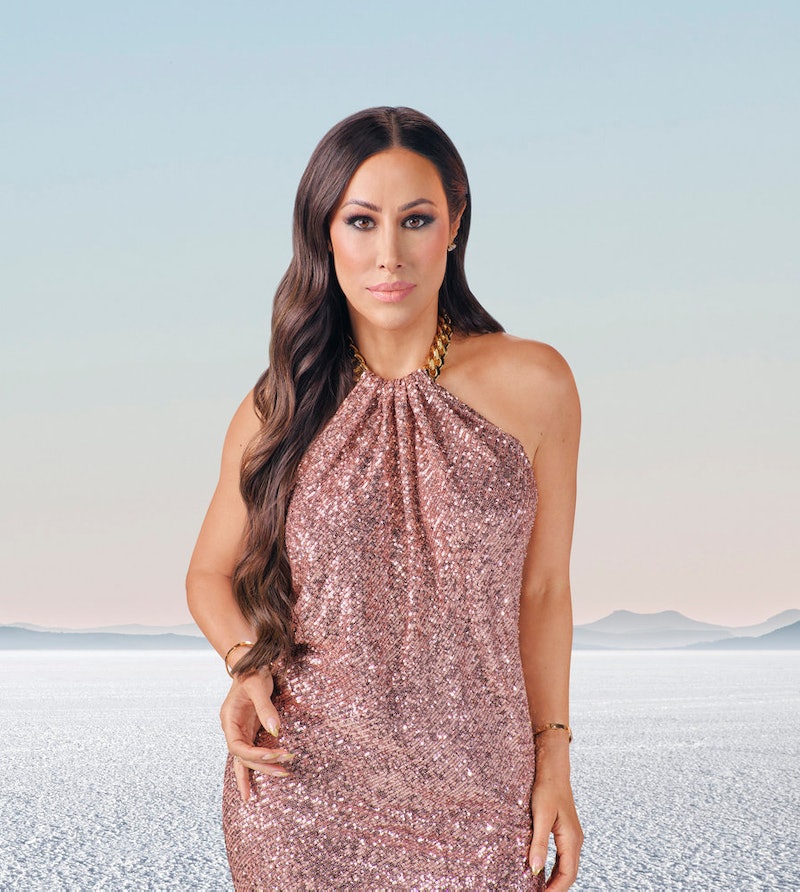 Things are about to get chilly at Bravo, as The Real Housewives of Salt Lake City Season 3 is upon us. Lisa Barlow, Heather Gay, Meredith Marks, Whitney Rose, and Jen Shah return for their third season, and while there won’t be joined by any new full-time Housewives, three new Friends will be making their debuts this season. Angie Katsanevas is introduced in the Season 3 premiere episode by Jen, who throws a Harlem Nights-themed birthday party for her husband, Coach Shah, at Angie’s home.

Bravo describes the new addition as a business owner, wife, and mother who “always has her friends’ backs, but will speak her mind when they cross her.” Aside from Jen, Angie has known Heather since they went to high school, with Heather calling her “the coolest girl at the 10-year reunion.” From her Instagram, she also seems to be close with Lisa, meaning she’ll inevitably land in the middle of Heather and Lisa’s never-ending drama. Fans will have to watch to find out whose side she takes, but for now, here’s everything you need to know about Salt Lake City’s newest face.

Angie has been married to fellow hair stylist Shawn Trujillo for over 23 years. The couple first met when they were both starting out in the cosmetology industry and quickly began working together. “When he was a hairdresser, I was just starting beauty school, so we did meet in the salon,” she told Hair.com. “Then I worked in the salon as his assistant for a while.” Now, they share a 10-year-old daughter, Elektra, and co-founded their Lunatic Fringe hair salons.

According to his Instagram bio, Shawn is also the owner of the Salt Lake City branch of Paul Mitchell’s cosmetology school. Angie’s husband has a low-key Instagram presence, only sharing 10 posts in total, most of which are in support of his wife, daughter, and their shared love of horses.

As described in her Instagram bio, Angie is the owner and founder of Lunatic Fringe salons, which she opened with her husband. According to the company’s website, Lunatic Fringe was founded in 1999 and continues to be based in Salt Lake City but has expanded to include locations in Idaho and Ohio. “The couple started their journey in a 700 square foot salon in Salt Lake City,” the website reads. “Today the nationally recognized brand is nine locations strong and growing.”

While she’s primarily known as a hairstylist in Utah, this is not Angie’s first time trying to add Real Housewife to her resume. In 2019, Angie revealed in a since-deleted Instagram post of her and her daughter Elektra that she was passed over to join the Season 1 cast of RHOSLC. “Did I make the cut for the Real Housewives of Salt Lake City you ask…The answer is NO,” she wrote, as reported by The Sun. “But we got our matching Mommy and Me gear on just in case we got the call back. I should have answered YES when they asked if there was drama in the salons. I’m sure the women they chose are fabulous. We are Greek, we will find another event to wear our matching heels to.” Now, she is one huge step closer to accomplishing her goal of becoming a Housewife.

More like this
What Jen Shah's Delayed Sentencing Could Mean For The 'RHOSLC' Season 3 Reunion
By Brad Witter and Jake Viswanath
Lisa & Lenny Hochstein's Messy Divorce On 'The Real Housewives of Miami,' Explained
By Jake Viswanath
Larsa Pippen Is Reportedly Dating The Son Of A Legendary NBA Player
By Jake Viswanath
What To Know About Simon Guobadia’s 3 Ex-Wives & Children
By Brad Witter
Get Even More From Bustle — Sign Up For The Newsletter