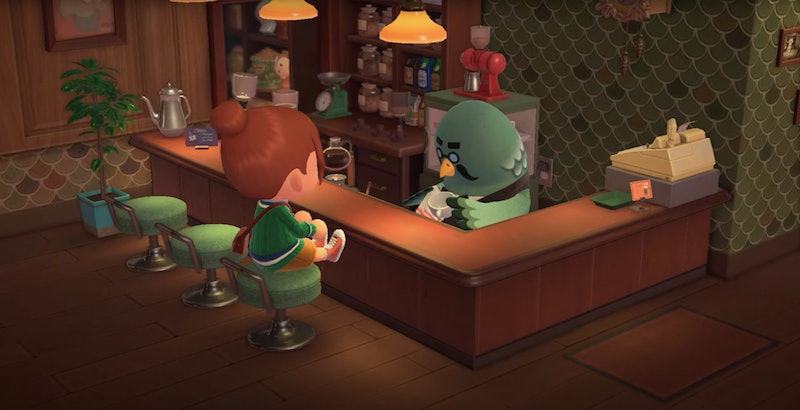 It’s been a while since Nintendo gave Animal Crossing: New Horizons a major update, but they’ve finally given players what they’ve been asking for all along. Announced during the Animal Crossing Direct on Oct. 15, 2021, the last major free update for New Horizons includes a bunch of features that’ll make the game feel completely different. So here’s what you can expect when the update drops on Nov. 5.

The beloved pigeon and coffee connoisseur Brewster has finally returned, and has taken up shop in Blather’s museum. Here you can enjoy a warm cup of joe, hang out with your villagers, and even invite your faves via the amiibo function. You can invite your friends for a coffee morning, too.

The seas just haven’t been the same without Kapp’n, but worry not as he’ll be taking you on a mysterious boat tour. After listening to one of his sea shantys, you’ll find yourself on a randomly generated island consisting of exotic fauna, a different season, or even a different time of day.

Harv’s island has gotten a major glow-up, thanks to his brilliant idea to create a plaza behind his photo studio. After donating a sizeable sum, you can help travelling vendors like Saharah, Kick, Redd, and Leif plant their roots permanently. Reese and Cyrus will also have a trailer dedicated to customising furniture that you couldn’t before, alongside Katrina who will tell your fortune for the day ahead.

And fans of Tortimer can breathe a sigh of relief, as the former mayor is alive and enjoying his retirement. It seems that he’ll help players deal with the new storage options.

You can expect to see 16 villagers make their debut in the New Horizons update. Eight old characters from the original game will finally be available, including four that were exclusive to the Japanese version. So expect to see Chabwick, Zoe, Ace, Rio, Fred, Azalea, Roswell, and Faith on your mystery island tour and the new set of amiibo cards.

These amiibo cards will also include the brand new villagers, including Shino the deer who has already become a firm fan favourite as well as Marlo the hamster who looks suspiciouslly like Marlon Brando and Ione the squirrel who has a beautiful galaxy filled tail.

Interactions with your villagers have had a major overhaul, making your friendships even more interactive. Villagers can now invite you to their homes, and will give you a surprise visit from time to time as well. There will be a bunch of new reactions for you to use with them as well.

Group stretching sessions with your villagers is now a thing, which you can physically get invoved in yourself by using motion controls and following the instructions on screen.

Expect to see a lot of new services to make island life that much easier, including new design options like being able to hang lamps and shelfs from the ceiling, painting accent walls, and new exterior designs. Home storage has been substantially expanded, and you can now store stuff outside in a shed for convenience.

Cooking is now a thing (finally), and you can grow a variety of vegetables like carrots, tomatoes, potatoes, and wheat to whip up some delicious meals in your kitchen. The maximum amount of stairs and bridges you can have has been increased to ten, and permanent ladders can be built to access cliffs across your island.

There’s also a bunch of new fences to decorate your island with, alongside 11 new hairstyles, more K.K. Slider songs, and even more furniture including the blessed Froggy chair.

Gyroids have made their triumphant return, which are special pieces of furniture players collect that make different noises depending on their names. It’s unclear whether all 127 different types of gyroid will be available to collect, but they’re customisable this time round.