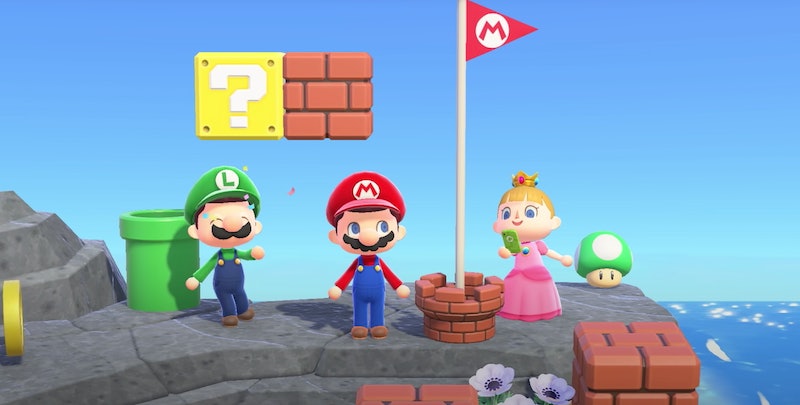 This year marks the 35th anniversary of Nintendo's mascot Mario, and to mark the occasion Animal Crossing: New Horizons is getting a new update to celebrate in Super Mario style. From Feb. 25, players will be able to decorate their island with memorable items from the Super Mario universe, in addition to dressing up as some of the series most recognisable characters. So here's what to expect from the Animal Crossing x Super Mario update on New Horizons, and how you can change your island into a somewhat functioning level from the games.

Available to download from Feb. 25, the majority of items and clothing will be obtainable starting March 2 from the in-game Nook Shopping service, as well as via the Able Sisters shop.

As shown in the recent Nintendo Direct, you can dress up as Luigi, Mario, Peach, and Wario. Each outfit consists of four items, including Peach's bubblegum pink dress and Mario's moustache. While outfits for Waluigi, Toad, or Yoshi are nowhere to be seen, that's not to say they couldn't be added in future updates — especially if fans make their voices heard.

An essential mechanic in every Super Mario game, the green warp pipe is more than just a decoration in this update. Players can interact with the pipe by jumping inside and teleporting to another portion of their island. According to fan site Animal Crossing World, Nintendo confirmed in a Japanese press release that you can place more than two pipes on your island, but you won't be able to choose your destination. Instead, they are "randomly chosen by the game." Nintendo has also confirmed that you can teleport in and out of your house too if you happen to place one indoors.

Other slightly interactive items include the Super Star which spins as you touch it, the ? Block which can give you coins, and the Thwomp Block which smashes to the ground when you walk up to it.

Aside from the warp pipe and Thwomp blocks, players can also decorate their island with classic items from the game. These include:

You can also 1-Up your house decor with two rugs resembling Yoshi's Egg and Lakitu's Cloud.

It doesn't stop with Mario