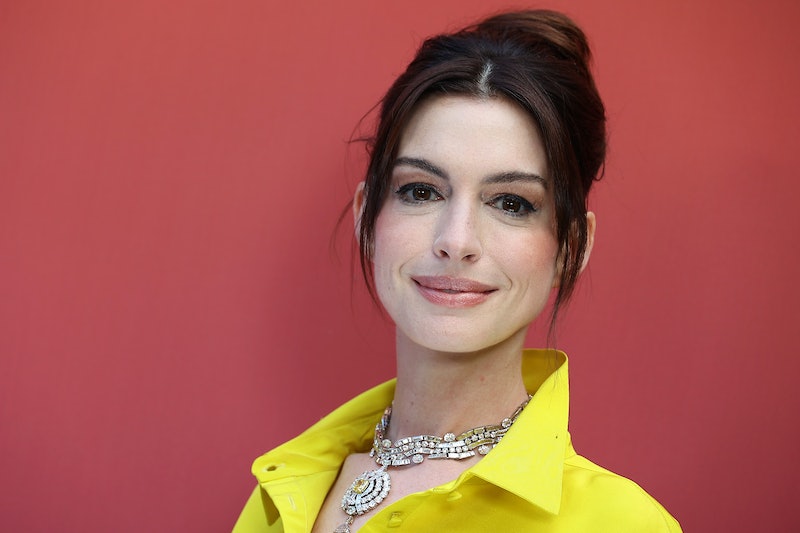 Sixteen years after The Devil Wears Prada hit theaters, Anne Hathaway celebrated the 2006 film’s anniversary with a dual-purpose Instagram post. After sharing her favorite movie outfit as Andy Sachs and showing “special love” to costume designer Patricia Field for putting the cast in “the most incredible, iconic and joyful costumes which somehow keep serving” even in 2022, the actor’s reflection remained grounded in the present day amid the Supreme Court’s decision to overturn Roe v. Wade.

“Looking back on photos of this beloved film that shaped the lives and careers of so many—mine included—I am struck by the fact that the young female characters in this movie built their lives and careers in a country that honored their right to have choice over their own reproductive health,” Hathaway captioned the June 30 Instagram post, before signing off, “See you in the fight xx.”

Following the June 24 Supreme Court ruling, which revoked federal protections for abortion, Hathaway shared a New Yorker article titled “We’re Not Going Back to the Time Before Roe. We’re Going Somewhere Worse” on Instagram, writing, “So much to say, but let’s start here.” On July 1, the Oscar winner also shared new images from an Elle France feature, noting in her social media caption that she had “such a lovely time shooting this story in a country where they honor reproductive rights.”

In the June 21 Interview magazine piece — “Anne Hathaway Answers 20 Questions From Her Friends and Fans” — in which the actor named her favorite Devil Wears Prada look, she also weighed in on the issue ahead of the Supreme Court officially issuing their decision. In response to her The Princess Diaries co-star Julie Andrews asking what “really ticks [her] off,” Hathaway replied that, currently, it was that she could “look at a newspaper and on the front page, see that there are plans in place to overturn Roe v. Wade next to an article about how there’s a baby formula shortage.” She elaborated that what makes her angry is that “the people that are cheering for the overturning of Roe v. Wade, will not have a conversation about that point in the future when those two stories intersect.”

The fight for abortion rights isn’t a new one for Hathaway, who’s been a vocal advocate for reproductive freedom over the years. In May 2019, for example, she rallied her millions of Instagram followers after Alabama Gov. Kay Ivey signed a bill into law banning almost all abortions in the state. “Yes the anti-abortion movement is primarily about controlling women’s bodies under the premise (for many, sincere) of saving lives, and yes this law is primarily the work of white men HOWEVER a white woman sponsored the bill and a white woman signed it into law,” she captioned a May 18 post. “As we’re resisting, let us also call out the complicity of the white women who made this awful moment possible, and which — make no mistake — WILL lead to the unnecessary and avoidable deaths of women, a disproportionate number of whom will be poor and/or Black.”

Hathaway is one of many celebrities speaking out for equality. In pledging a $1 million donation to reproductive rights groups, Lizzo also noted similar statistics, tweeting on June 24 that “Black women & women of color have historically had disproportionately less access to family planning resources— this is a great loss but not a new one.”

More like this
Taylor Swift Wanted To Be In 'Twilight: New Moon,' According To Its Director
By Grace Wehniainen
Before 'Bullet Train,' Revisit These Brad Pitt 'Fight Club' Premiere Photos From 1999
By Grace Wehniainen
Jennifer Coolidge Just Said The Most Controversial Thing About Legally Blonde’s “Bend & Snap”
By Maxine Harrison
Jonah Hill Explains How His Anxiety Attacks Will Change The Rest Of His Career
By Grace Wehniainen
Get Even More From Bustle — Sign Up For The Newsletter