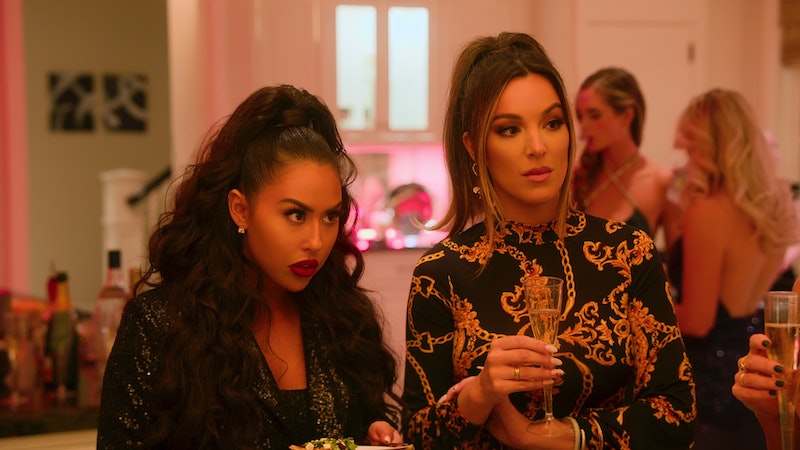 When Selling The OC kicks off, Oppenheim Group real estate agents Alex Hall and Kayla Cardona seem close. But then several things happen that cause the two women to drift away from each other, then back again, and finally apart. By the time the agents have that showdown on the yacht, it’s hard to tell whether Kayla and Hall are still friends at the end of Selling The OC Season 1.

Two main issues during the season threatened Kayla and Hall’s friendship. The first was that Kayla supposedly got drunk at a hangout session with all of the agents and tried to make a move on Tyler Stanaland, who is married to actress Brittany Snow. And the show revealed that this wasn’t the first time something like this had happened. The other women in the office — notably Polly Brindle, Brandi Marshall, and Hall — took issue with Kayla’s behavior and reactions to their criticisms.

Hall tells Bustle people didn’t see that Tyler was way more uncomfortable behind the scenes than he looks on the show, which is what caused them to come to his defense. “It was just very annoying because Tyler got to a point where he was saying, ‘Well, I'm just not going to come around after hours anymore,’” she says. “It was bothersome to all of us because we didn't think that that was fair.” That said, Tyler tells Bustle that his and Kayla’s relationship is fine after she apologized on the show, and he doesn’t think it continues to be an issue.

With the other women pushing her away, Kayla aligned herself with Alexandra Jarvis and Alexandra Rose, a pair of agents who are not close with the rest of the cast. As all this was happening, Kayla continued working with Hall on a co-listing, but working together didn’t help their personal issues, leading to an O Group team meeting where Hall called out Kayla. Hall claimed that she had been doing all the work on the listing.

Since the show’s premiere, the two agents are no longer as close as they once were. Hall says that after watching the episodes, she texted Kayla but hadn’t heard back. They are polite at work events, but Hall thinks she and Kayla are “more closed off since the show.”

Still, Hall thinks she and Kayla are just different, which became more apparent when they worked on the same listing with a client that Hall says Kayla met at a personal event. Hall shares that she’s learned to be strictly about business when working with most male clients. “There’s no pleasure until the business is done [for me],” Hall explains, adding how that kind of attitude ruined the client’s “game plan” for the sale. “Kayla's a pretty girl; she meets a cute single guy and brings me on. So I had that conversation with her as well. I said, ‘This is my advice to you: Don’t muddy the waters and keep it very professional.” Hall says that the client didn’t seem to like that approach and ended up calling Hall a “used car salesman,” which Kayla repeats on the show. “I am the farthest thing from that, so I don't really take it personally,” Hall says. “I do think that the fact that Kayla said that in a group setting in front of my other peers was inappropriate.”

Until the cast got a sneak peek of Selling The OC a couple of weeks before its premiere, Kayla tells Bustle that it had been cordial between her and Hall. Now, she takes issue with some of the things Hall has said behind her back on the show. “I was caught completely off guard. I had no idea that she felt a certain way about me. I trusted her more than anyone,” Kayla says. “We shared a lot of personal things with each other, even off camera, and I really confided in her. I'm not mad. I'm not angry. I'm just extremely disappointed.”

Kayla has been in touch with Jarvis and Rose since seeing the episodes and explains that they are pretty close, especially now that she understands what the two were trying to say on the yacht. In the season finale, the other cast members accused Jarvis and Rose of making Kayla cry by bringing up the situation with Tyler again. But Kayla now sees that the women seemed to be taking her side by questioning if Hall’s and the others’ interactions with Tyler could also be considered flirty. Kayla adds that she has spoken to Tyler since watching the episodes and confirms that the issues between them have been squashed.

As viewers watch the show and start to pick sides, Hall and Kayla will likely have much more to say regarding their relationship. Hopefully, they’ll be able to hash it all out on camera if Selling The OC returns for Season 2.

More like this
'Bling Empire: New York’ Star Dorothy Wang Wants To Try 'The Simple Life'
By Alyssa Lapid
At 28, Debra Jo Rupp Was Living A Much Different '70s Show
By Grace Wehniainen
Zach Reveals The Chaotic 30 Minutes That Were Cut From ‘The Bachelor’ Premiere
By Grace Wehniainen
'Bling Empire: New York' Star Nam Laks Is The “Blair Waldorf Of Thailand”
By Alyssa Lapid
Get Even More From Bustle — Sign Up For The Newsletter
From hair trends to relationship advice, our daily newsletter has everything you need to sound like a person who’s on TikTok, even if you aren’t.