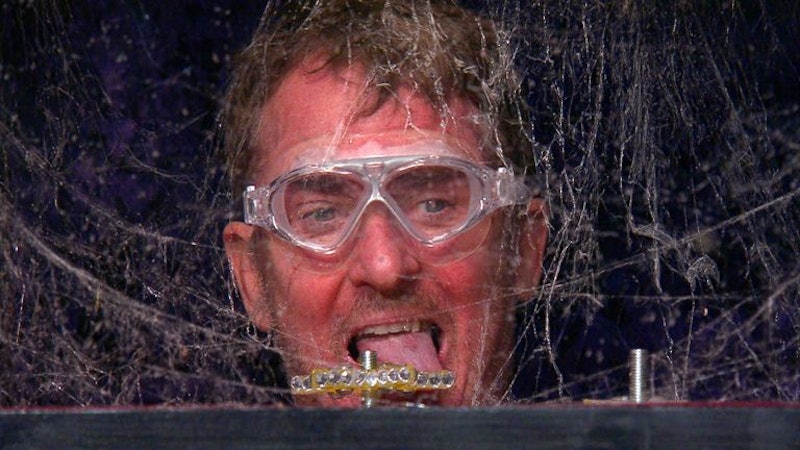 Despite the move to Wales for I’m A Celebrity 2020, the creepy critters are still terrifying campmates every evening for our entertainment. While Australian natives like the witchetty grub and crocodiles have yet to make an appearance, there’s been an abundance of cockroaches, maggots, and crickets as well as animals more common to Britain like pigeons, rats, and mice. But for some viewers, how the animals and bugs are treated is a cause for concern, with many asking, are any animals or insects harmed on I'm A Celeb?

Year in, year out, I'm A Celeb draws accusations of cruelty, due to its use of live insects and animals. The Bushtucker Trials, which see the celebs chomping down on some jungle specialities, à la grub and testicles, have probably caused the most controversy. Back in 2015, 533 viewers complained to broadcasting regulator Ofcom over Ferne McCann eating a live spider on the show, according to The Independent.

Ofcom has previously dismissed complaints about the show's treatment of animals and insects. In 2016 the broadcasting regulator told The Sun, “We assessed a number of complaints about the tasks given to contestants. However, these were in keeping with the well-established format of this reality series, and were unlikely to have exceeded the expectations of the audience.”

I reached out to ITV to see if they had any comment, and a spokesperson told me, "I’m A Celebrity complies with animal welfare law concerning the use of animals and we are proud of our exemplary production practices."

Chris Packham, presenter of Naturewatch, was one of the first to point out what he felt was the mistreatment of animals and insects on the show. According to the Daily Mail, Packham told Yours magazine in a 2009 that he believed that "The people working on I'm A Celebrity... Get Me Out of Here! have no regard for creatures' lives."

He also claimed that "If a celebrity trod on a cat it would be on the front page of every newspaper but they jump up and down on as many cockroaches, spiders, and bugs as they like."

Talking about the show’s relocation to Wales, Packham reiterated his disapproval of the show's use of animals and insects this year, and also pointed out that there would be major issues if the any of the bugs escaped into the surrounding Welsh countryside. “If any of these species were to naturalise, we could have severe problems,” the presenter said. “And we do have a history in this country of invasive species which have caused enormous and ecological damage.”

As Bustle has previously reported, the North Wales Police in investigated this issue. They have since advised the I’m A Celeb production team on “set management and biosecurity.”

ITV has stated that the insects used are “non-invasive” and that the animals “are only ever released in a contained area and collected immediately after filming.”

The series, which is filming at Gwrych Castle in Abergele, North Wales, is also close to an ancient woodland that is a site of special scientific interest (SSSI). “There is currently no evidence that species used in filming have not been contained,” a spokesperson for the Trust told the Guardian. “Nor do we know what those species are, so we are unable to give any indication of what the impacts might be.

“The matter of whether there has been any breach of the law is one for the police, and we do not wish to pre-empt the results of their investigation. Obviously we hope that in this case best practice has been followed.”

This article was originally published on November 20, 2018