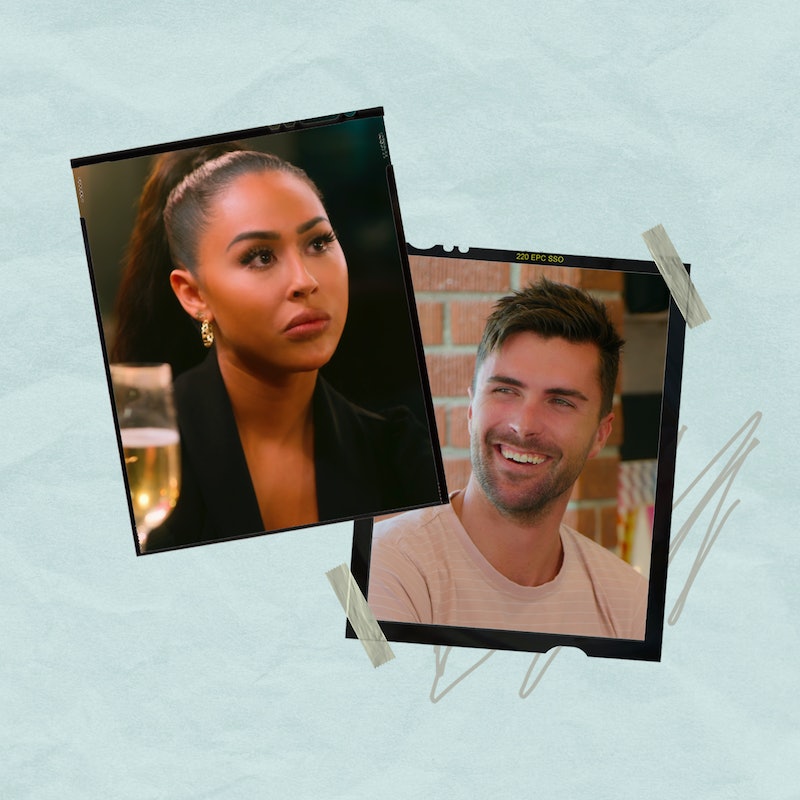 It doesn’t take long for the relationships among the agents of The Oppenheim Group’s Newport Beach office to start crumbling. In Selling The OC, it all starts with an “almost kiss” between Kayla Cardona and Tyler Stanaland at an after-hours event. Since the cast members actually work together when the cameras aren’t rolling, it’s only normal for them to hang out for happy hour drinks and dinner, so it wouldn’t be too scandalous if there were some cocktail-infused interactions going on outside of the office. Alas, Tyler is married to actress Brittany Snow, and those closest to him, like Alex Hall, Polly Brindle, and Brandi Marshall, took issue with Kayla trying to hook up with a married man and making him feel uncomfortable.

The looming question of the season was whether Tyler and Kayla would be able to move on from the drama, especially as their co-stars continue to bring it up. The Selling The OC cast opens up to Bustle about the Tyler and Kayla drama and shares where they all stand today after watching Season 1.

What Really Happened With Tyler & Kayla?

Calling it an “almost kiss” seems unfair as Kayla and Tyler tell Bustle that “nothing happened” between them that night. Tyler explains, “It wasn't on camera, but one night, we were all out, which we do at the Group. Kayla did try and kiss me, and nothing happened, but then a second night later, it happened again. There were some words she said that it came to a point where I had to remove myself from the situation and explain to her that our relationship moving forward would be different.” He adds, “It was just something you don’t do to a married man.”

Kayla agrees with Tyler’s recounting of the evening and admits that watching it all play out still makes her “cringe,” but she’s glad she apologized. “I know I'm going to get a lot of hate. But I also do feel like I'm going to get a lot more love because I think the smart people will understand and see for themselves,” she says.

How Do The Agents Think About Tyler & Kayla?

While Kayla may have behaved inappropriately with Tyler, the real issue at the heart of the drama is how the other agents responded to it. Hall, Polly, Austin Victoria, and others stood up for Tyler, because — as Hall tells Bustle — Tyler was so upset with the situation that he said he would just not hang out with them after work anymore. “It was bothersome to all of us because we didn't think that that was fair,” she says.

The split in the O Group was exacerbated when Alexandra Rose and Alexandra Jarvis stood up for Kayla in the season finale. Rose and Jarvis questioned if the other agents were being hypocrites given that they also seemingly flirted with Tyler. Earlier in the season, Hall literally put his nose in her mouth on the beach, and Polly got naked in front of the whole group in the same episode. But Hall and Polly don’t see their actions as being anywhere near as bad as what Kayla did, with both telling Bustle that they are just a flirtatious friend group and being a little touchy-feely isn’t the same as trying to kiss someone and get them to leave the party with you late at night.

Tyler seemingly agrees, saying, “Polly and Alex and I, and some of the other cast members, we all became really good friends. So it can seem flirty, but genuinely, it's nothing but more like a brother and sister, like a best friends sort of thing. Between all of us, no lines will ever be crossed in that way. So, that's what frustrated me about [how Jarvis and Rose were comparing the “almost kiss” with the beach flirting]. It was different than what Kayla tried to do to me.”

Then again, even his best office bud, Austin, thinks things got out of control. Austin tells Bustle, “I feel like we all make mistakes in life, and no one's perfect. As for the girls flirting with Tyler, I didn't see any of that, but now that I look at it on TV, you're like, ‘Wow, they are very flirty.’ [Kayla, Alexandra Jarvis, and Alexandra Rose] do have a point,” he adds.

Tyler and Kayla say that any issue has been “squashed” since she apologized on Selling The OC and off-camera. Kayla says that after the first time the agents reunited since watching their advance episodes, it was clear the other women still held Kayla’s actions against her. But Tyler called to make sure that things were still OK between them. “Me and Tyler are good,” Kayla says.

Tyler concurs but seems a little wary about having a full-on friendship with Kayla again. “We talked about what happened, and she apologized. It was squashed. That's the funny thing about the show because the drama gets dragged out, but her and I are great.” Tyler adds, “I don't know that our friendship will ever be what it once was. Just because once that line is crossed, I have to keep my walls up. But we're totally fine.”

The only real drama that remains after what happened with Tyler and Kayla seems to involve the other agents in the office. Whether Kayla and the others will be able to fix their relationships or continue icing each other out could be answered in a potential second season. But based on how things are going now for the Selling The OC cast, it seems like it might be a long, drama-filled road to reestablish those friendships.

More like this
'Bling Empire: New York’ Star Tina Leung Has A Superhero Alter-Ego
By Alyssa Lapid
Brittany Snow Files For Divorce From Tyler Stanaland After 'Selling The OC' Drama
By Grace Wehniainen and Radhika Menon
'That '90s Show' Star Callie Haverda Got Advice From Mila Kunis & Ashton Kutcher
By Brad Witter
'Bling Empire: New York’ Star Dorothy Wang Wants To Try 'The Simple Life'
By Alyssa Lapid
Get Even More From Bustle — Sign Up For The Newsletter
From hair trends to relationship advice, our daily newsletter has everything you need to sound like a person who’s on TikTok, even if you aren’t.