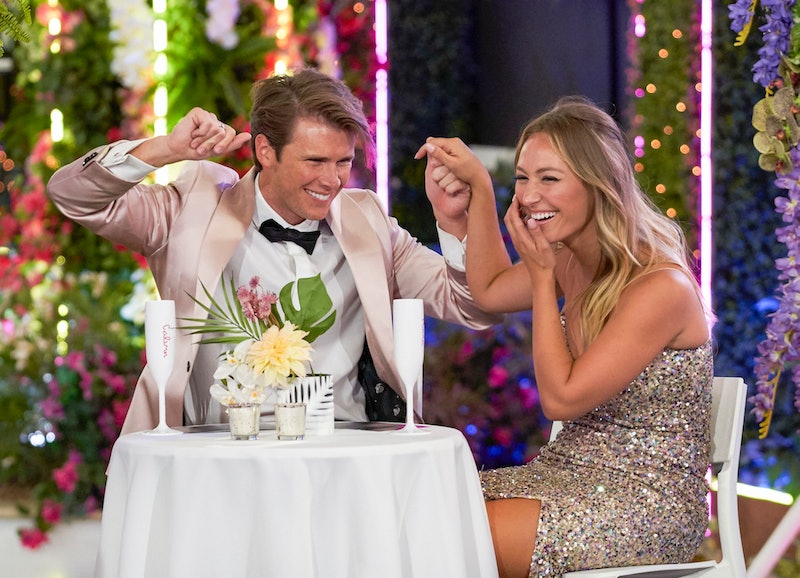 While the fan-favorite couple failed to come in first in the finale, Moira and Calvin's Love Island romance appeared to still be growing strong after the show. Sadly, their summer love affair won't be continuing into the winter. On Nov. 22, Moira revealed on her Instagram Story that she and Calvin split less than two months after the Season 2 finale.

In a new interview with People, Moira said that she and Calvin wanted to slowly grow their relationship — or "situationship" — and get to know each other outside of the Love Island villa. "To be honest, the time we had in the villa really wasn't long enough — maybe like, two weeks or even less — to build a foundation for a relationship on the outside," she said.

The pair called it quits after just a few weeks simply because "life just got in the way," she continued. "We just got too busy, our schedules didn't match up, and the distance between us didn't help either," she said, clarifying that neither one of them are at fault. "I was sad about it of course, because I thought we might be able to make something happen, but we just had to make a realistic decision and move forward. We decided it would only be fair to ourselves to call it quits and go our separate ways."

Before their romance fizzled out, Moira and Calvin were growing stronger than some fans expected, judging from their respective Instagram accounts. The two were excessively re-sharing posts from fans declaring the duo their favorite couple on their Instagram Stories. They also documented themselves out and about in Las Vegas, where the season was filmed, while taking some much-needed breathers in the wake of production.

Calvin shared a series of Instagram Stories from Gordon Ramsay's Hell's Kitchen restaurant with Moira and some friends on Oct. 1, where he enjoyed a steak dinner. Later, he shared footage of the crew toasting to the end of the season at the Caesars Palace hotel. "I just wanna thank all of y'all for your support and your love," he said in one Instagram Story video. "I will be taking the next couple of days to spend time with my family and friends, and I'll be reaching out to y'all soon."

Calvin and Moira first coupled up in week two of the season. After a series of on and off couplings and mismatches with other people in the villa (or, in this particular COVID-19 quarantine case, Caesar's Palace in Las Vegas), the duo got back together again during week five and stayed a couple until the finale. Unfortunately, the fan-favorite couple failed to come in first; America voted for Justine and Caleb as the No. 1 couple (and, not to mention, recipients of the $100,000 prize), with Cely and Johnny coming in at second place and Moira and Calvin ranking in at third.

In the last episode, the two spoke about how they looked forward to continuing their romance. "I see us furthering what we have together," Moira said. "I know that deep down we have something special and I look forward to seeing where it goes." Calvin echoed her sentiments and said, "I want to continue outside of this villa experience into the world."

This article was originally published on Oct. 2, 2020