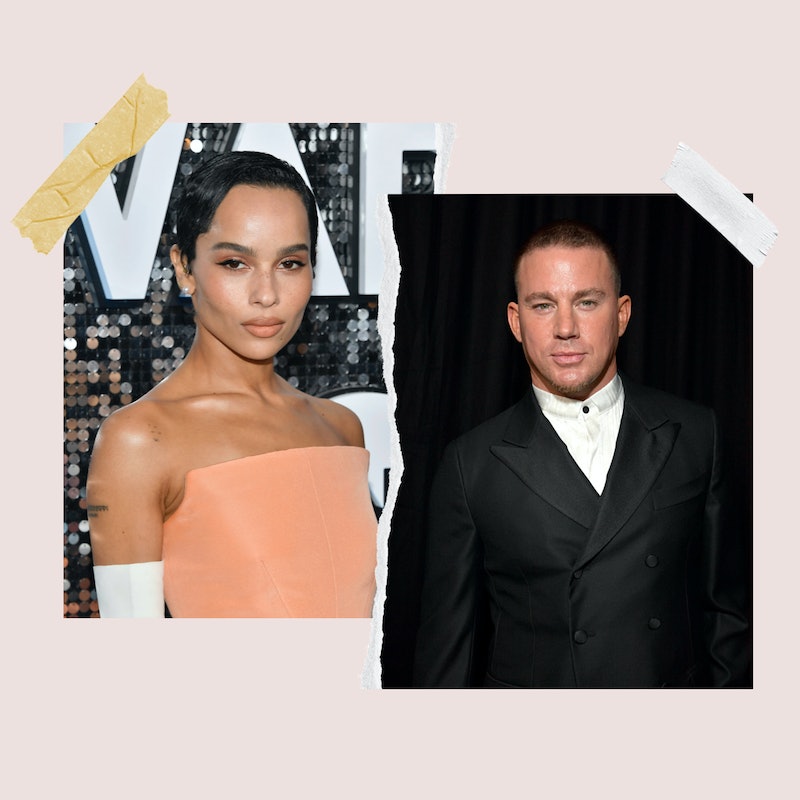 In an outing that reignited dating speculation that began last January, Channing Tatum and Zoë Kravitz fueled rumors after being spotted grabbing coffee in the East Village together. On Thursday, Aug. 19, Kravitz and Tatum were photographed drinking iced coffee and making each other laugh, both dressed in casual outfits for the hot weather. The outing was the duo’s second of the week — just days earlier, the two actors were spotted on a joint bike ride, with Kravitz riding on the bike’s pegs while Tatum pedaled. (Bustle reached out to representatives for Tatum and Kravitz but did not hear back at the time of publication.) On Oct. 23, the two were finally spotted engaging in some PDA: PG-13 handholding while out together in New York, fueling even more romance rumors.

Fans first began to speculate that Tatum and Kravitz could be an item in January after Kravitz announced her divorce from husband Karl Glusman. An anonymous source denied the two were romantically involved to People at the time, saying, “They’re working together on an upcoming project and it’s not true that they're dating.” Tatum is slated to star as a sinister philanthropist and tech mogul in Kravitz’s upcoming directorial debut, a genre thriller titled Pussy Island that will deal with her experiences of gender.

In June, the Big Little Lies star told Deadline that Tatum was her top pick to star in the film alongside Master of None’s Naomi Ackie. “Chan was my first choice, the one I thought of when I wrote this character,” she said. “I just knew from Magic Mike and his live shows, I got the sense he’s a true feminist and I wanted to collaborate with someone who was clearly interested in exploring this subject matter.”

Tatum, who was most recently linked to Jessie J, revealed he became fast friends with Kravitz after their first meeting to discuss the Pussy Island production process. He said that the High Fidelity star offered him fashion advice right away. “When someone can just come out and tell me I should not be wearing Crocs, and is so adamant about it, she completely convinced me and I never wear Crocs anymore,” he said. Kravitz responded to Tatum during the interview, saying, “I was just trying to be a good friend, Chan.”

The two have been spending more time together, as evidenced by photos of the two all over New York, them working on their grocery list, and the couple enjoying lunch in Brooklyn. At this year’s Met Gala last Sept. 13, Kravitz and Tatum arrived separately but were photographed leaving together. He was even snapped carrying her teeny bedazzled purse at some point at the afterparty. On Oct. 23, they were finally seen holding hands — practically the IRL version of being Instagram official.

Many people on Twitter are convinced recent photos mean Kravitz and Tatum are officially together, with one user writing, “I never thought I’d see the day Zoe Kravitz and Channing Tatum become a couple,” and another tweeting, “zoë kravitz and channing tatum together are my new passion.” One fan even speculated on Tatum’s outfit in the recent photos, tweeting, “here’s. no way in hell zoe kravitz wasn’t the one who styled channing tatum here and i love knowing that.”

Kravitz and Tatum have not publicly confirmed the relationship, but on Aug. 19, an anonymous insider told E! News that the two actor’s friendship had turned romantic while working on the film. “There’s more than a friendship going on with Channing and Zoë,” the unnamed source said. “They are spending a lot of time together and having fun. They are more than just close friends or co-stars. Their relationship has grown into more.” Petition to make Chaoë (or Zoëning or Tavitz — we’ll work on it) a long-term thing.

More like this
Hailey Bieber Just Responded To *That* Viral Met Gala Moment
By Radhika Menon and Sam Ramsden
Who Is Nick Cannon Dating & How Many Kids Does He Have?
By Jordyn Tilchen and Radhika Menon
Stanley Tucci & Felicity Blunt’s Relationship Timeline Might Make You A Little Hungry
By Jake Viswanath
Adam Devine Hilariously Let Everyone Know He’s *Not* Accused Cheater Adam Levine
By Brad Witter
Get Even More From Bustle — Sign Up For The Newsletter

This article was originally published on Aug. 22, 2021