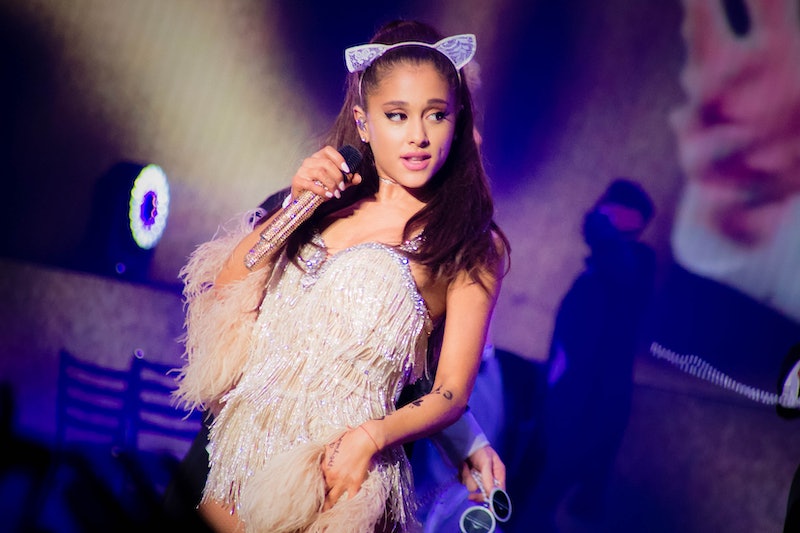 Between her jobs as actor, singer, and now a coach on The Voice, Ariana Grande has become quite good as “switchin’ them positions” for her fans. Grande is The Voice’s newest judge for Season 21, as she announced on Twitter on Tuesday, March 30. The singer will join longtime coaches Kelly Clarkson, John Legend, and Blake Shelton, replacing Nick Jonas on the panel.

“surprise !!! i am beyond thrilled, honored, excited to be joining @kellyclarkson @johnlegend @blakeshelton next season ~ season 21 of @nbcthevoice !,” she wrote, sharing a photo of herself posing in her new judges chair. “@nickjonas we will miss you.” In a statement to Page Six, Grande explained that she has been a “huge fan” of the competition show for a long time. “I can’t wait to go head-to-head with the incredible coaches, get to know these new artists and help to take their craft to the next level,” she said.

According to the outlet, Grande and her management team were in negotiations to get her a coaching job “for a while.” While the singer has performed on The Voice before, this marks her first time appearing in a coaching capacity, and her first talent show judging gig (unless you count her 2015 stint as a guest judge on RuPaul’s Drag Race).

While the Victorious star may be replacing Jonas for now, he’s not off the show for good. Rather, according to Page Six, he will simply become one of many coaches on The Voice who drop in and out every few seasons. “Nick will remain on rotation with other stars that have appeared on the show,” the outlet reported. “The chances are he will be back soon.” Luckily, it seems that Jonas is glad to have her join the team (and perhaps give him a break). “Congrats @ArianaGrande!,” he tweeted, responding to Grande’s announcement. “You’re going to kill it next season! Welcome to the family.”

It seems that Grande’s fellow coaches are also thrilled about her arrival. Her “Beauty and the Beast” duet partner Legend reacted to the announcement on Twitter, saying he was “so excited to welcome Ariana to our Voice family!!” Clarkson is also a known fan, having covered Grande’s “No Tears Left to Cry” on her talk show back in December. Let’s hope Grande’s stint on The Voice leads to some memorable duets.

More like this
Kanye West Apologizes To Kim K "For Any Stress I Have Caused" In Rare Interview
By Jake Viswanath
Jason Derulo Is Launching A New Singing Show In The UK
By Maxine Harrison
20 Years Later, Kelly Clarkson & 'American Idol' Judges Reunite For Her Hollywood Walk Of Fame Star
By Radhika Menon
Tristan Thompson Proposed To Khloé Kardashian & She Said No
By Jake Viswanath
Get Even More From Bustle — Sign Up For The Newsletter