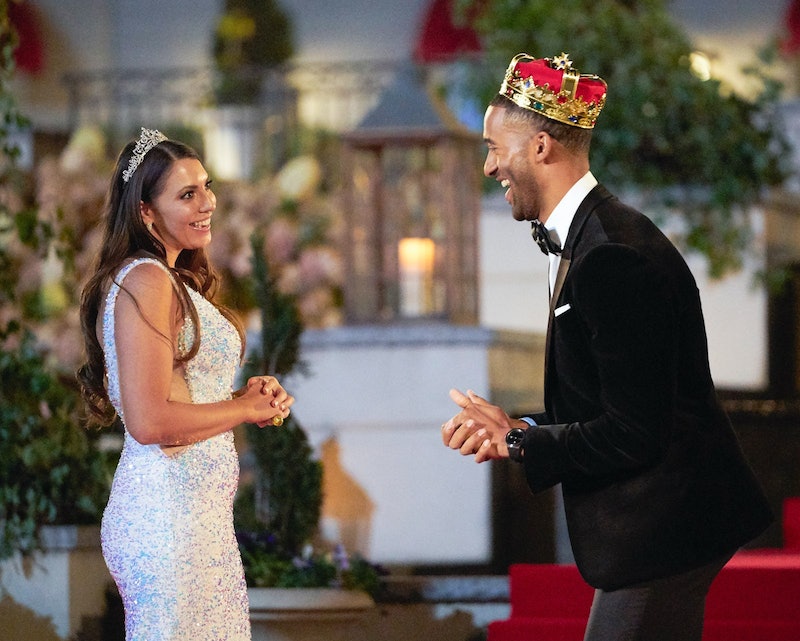 "Queen" Victoria may not have been happy when she didn't receive a rose from Matt James, but the Bachelor doesn't regret his choices. During a recent interview with People, Matt revealed it was an "easy" decision to send Victoria home on The Bachelor once he learned that she had been contributing to the "toxic environment" in the house.

"When that information was made available to me about what was going on in the house, that type of name calling and just blatant lies and rumors is unacceptable," Matt continued. On the Feb. 1 episode of The Bachelor, he confronted the women before the rose ceremony after learning that some of them had been "bullying" and spreading rumors about their fellow contestants. "I would have never imagined I was going to be dealing with things like I did last night with grown women," Matt said of the drama, "but whatever you have to do to make sure that these women are comfortable and you can get the best out of them and they can get the best out of me."

Once he made up his mind to send Victoria home for the drama she caused, nothing was going to change it — not even when the "queen" told him she felt sorry for him on her way out of the chateau. "I had no words," Matt said of his reaction to Victoria's dramatic exit. "What do you say to that?"

After she wasn't given a rose, Victoria went on a tearful rant calling out the Bachelor for his "poor" choices. "He's not my king and I'm still a queen," she told the cameras. "He's a jester. ... Matt's not the guy for me. I'm never dating another Matt again. I hate that name now." Victoria also tried once more to assert that she wasn't the source of the toxicity in the house: "The whole house is going to feel like sh*t [now] that I'm gone. I brought so many people so much joy."

Many of her fellow contestants would likely disagree with Victoria's assessment, as would Bachelor fans and former Bachelorettes like Rachel Lindsay, who recently criticized the franchise for casting the "queen" for the sake of drama. "People are not entertained and amused by Victoria — or the 'queen' as she calls herself — yet she got to go on Good Morning America and was given a bigger platform," Rachel told Insider about the controversial contestant. "All her behavior is being rewarded."

The former Bachelorette continued by explaining that the drama this season "bears the question of, 'What's happening here? Who are we trying to attract?' Is it a younger audience? Is it an audience that would be entertained by bullying? I would say that's not the case because a lot of viewers seem to be really upset at what they're seeing."

And, Rachel continued, it encourages other drama queens to apply for the show so that they too can earn the same amount of attention that Victoria has been given by ABC. "You want to be a 'Victoria' so you can get the fame and the attention," Rachel said, adding she has been rewarded for "the wrong reasons. And is that fair to Matt James and whoever the next lead is if they're really trying to find love?"