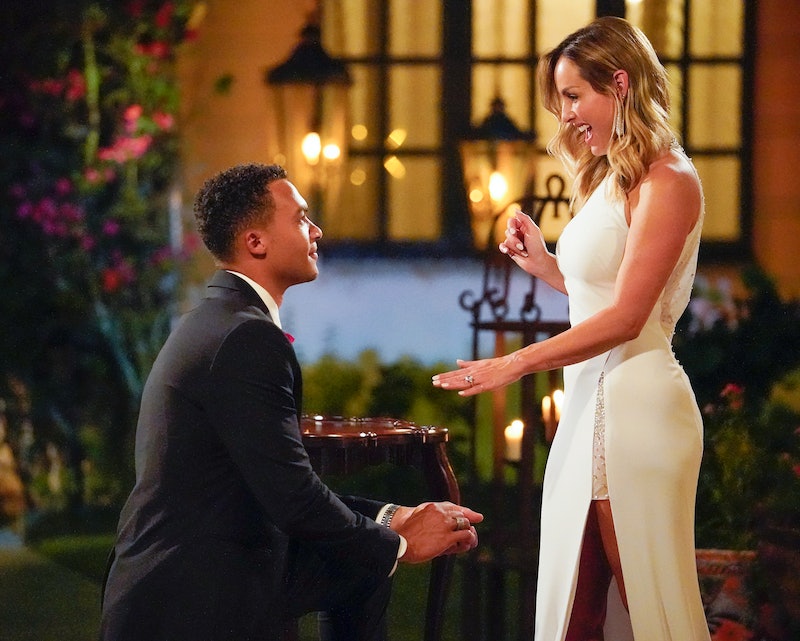 Dale Moss may have popped the question to Clare Crawley in the middle of a pandemic, but that hasn't stopped other Bachelor franchise alums from throwing them a virtual engagement party. Shortly after the couple confirmed the exciting news, Bachelor Nation congratulated Clare and Dale on their engagement and their very 2020-appropriate love story.

The couple each shared their own celebratory posts on Instagram with photos from the proposal, where Dale promised that there is "never a point I won't show up for" his new fiancée. "It’s official!! Love wins!!!!" Clare captioned her own post, along with a ring and heart emoji. In the comments, the new Bachelorette Tayshia Adams shared a message for the happy new couple. "GIRLLLLL!!" she wrote, "so glad you found your man!!! All the love."

Meanwhile, host Chris Harrison shared his own words of love and support in Clare's comment section before posting a photo with the newly engaged couple on his Instagram page. "Congratulations to these two crazy kids! Wishing them nothing but love as they start this journey together," he wrote. (The host is also taking his role as Clare and Dale's biggest fan seriously, defending them from a commenter who said the couple wouldn't last six weeks.)

In addition to the many former Bachelorettes who shared their well-wishes in the comments of Clare's post — "You stayed true to yourself and it paid off," Jojo Fletcher wrote, while Rachel Lindsay explained that she was "beyond happy" for "my sweet Clare" — the hairstylist's ex-fiancé, Benoit Beausejour-Savard, also congratulated her on the engagement.

"You deserve all the love and happiness!! Happy for you two," the Canadian, who met and got engaged to Clare in 2018 after they appeared on The Bachelor: Winter Games, wrote in her comments. He also shared a screenshot from Dale's proposal on his Instagram Story, where he echoed those sentiments. "Clare, you deserve all the best," he wrote. "Sooo happy for you." Another one of Clare's exes, former Bachelor Juan Pablo Galavis, was a little less charitable with his own reaction to her big news.

"Should I WATCH tonight's EPISODE?" he wrote just before Clare and Dale's engagement aired. He wasn't able to actually watch the proposal happen live, but that didn't stop him from sharing his opinions in a different way. According to Us Weekly, the former soccer player liked a Twitter post declaring that he "dodged a bullet" when he broke things off with Clare during his 2014 season of The Bachelor.

However, other former Bachelors were a lot happier for the new couple; Nick Viall congratulated Dale and Clare on their "2020 love story," while Ben Higgins addressed the many people who criticized the Bachelorette for moving too quickly with her new fiancé. "Be nice to Clare Crawley, she gave us a love story," Higgins wrote. "And ultimately that's what I watch the show for. Also, she was never fake. She was quick and decisive but never fake."