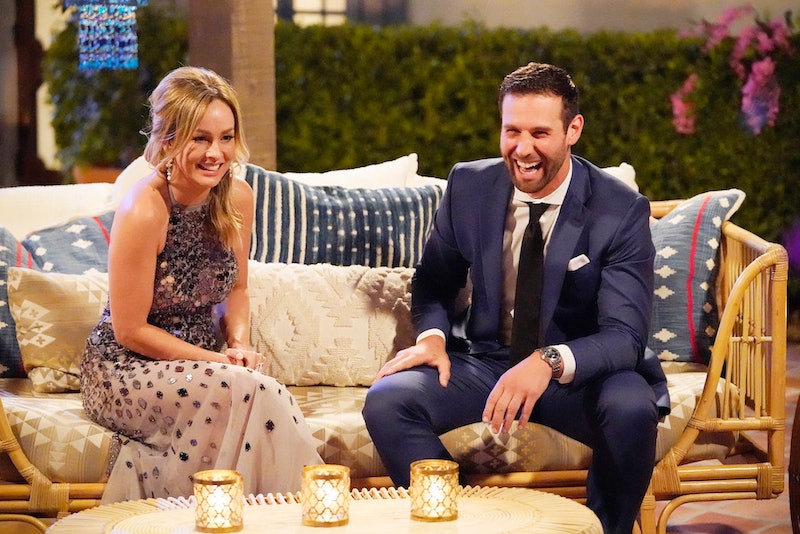 After a turbulent first few episodes, the anticipated Bachelorette shakeup finally happened: Clare Crawley and Dale Moss left the show, paving the way for Tayshia Adams to be the new Bachelorette. While Bachelor Nation has been eagerly awaiting this moment, not everyone is adapting to the change very well. According to a new teaser shared ahead of the Tuesday, Nov. 10 episode, Bachelorette contestant Jason Foster just might depart the series after Clare's exit. In the clip, a visibly upset Jason tells fellow contestant Joe Park that he can't just move on to someone else so easily.

"I'm hanging on by a piece of floss," Jason tells Joe in a sneak peek shared by Us Weekly on Tuesday. "It's not fair to Tayshia. If I'm gonna be here, she deserves all of me. I'm fighting still, but I don't know how much more I have left, and I'm just being brutally honest with you, man." Jason later adds in his confessional, "Tayshia is gorgeous. She's given everybody the chance that we all deserve, but I can't just flip an on and off switch with somebody else. It's just hard to move on."

The clip ends with a cliffhanger of Jason visiting Tayshia in her room, presumably to discuss some of the troubles he's facing after the season's unprecedented twist.

Jason was the first contestant to have a one-on-one date with Clare, offering the Bachelorette some vulnerable tidbits about his difficult past. The two wrote down some secrets about themselves near a campfire and screamed into the wilderness. As chronicled in last week's episode, Jason took the news of Clare's exit pretty hard. "I'm crushed. I don't know if my heart is going to come out," he said after Clare informed the group that she would be leaving with Dale. "I opened up to somebody like I've never done before."

Tayshia, for her part, has also admitted that she was hesitant to replace Clare since the contestants were chosen with Clare in mind. "The guys knew that it was going to be Clare, and I didn't know if they were going to be accepting or if they were willing to open their hearts," Tayshia told Us Weekly on Monday, Nov. 9. "If they had fallen in love, like, I didn't know what was going on. So, it was definitely a hesitation." She even offered a possible tease of Jason's troubles. "Every single guy really reassured me that they were so happy and excited. And once I had that confidence, I was like, 'OK, I got this'," she said. "But there were some guys, yes, that were still having feelings for Clare, and so we talked about that as well."

The Bachelorette airs on Tuesdays at 8 p.m. on ABC.