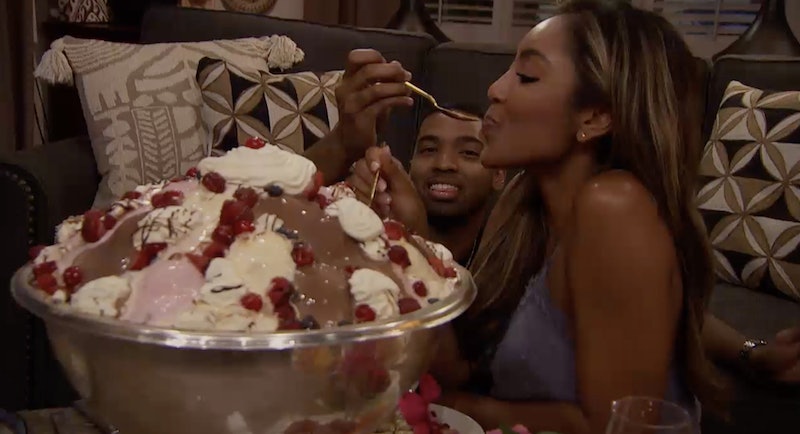 If you're a longtime fan of The Bachelorette, you know contestants never eat on dates. But Tayshia and Ivan broke that rule and dipped into a gigantic (like, at least five pound) ice cream sundae during their cozy one-on-one date on Tuesday night. And fans had a lot of questions: where did it come from? Why was it not addressed? And most importantly, what became of the leftovers?!?!

Obviously, due to coronavirus restrictions, Tayshia's dates have been a little more low-key than usual. Instead of attending a concert or exploring a new city, she and Ivan played Twister and The Floor Is Lava in her resort suite before ordering room service. When it arrived, they only nibbled on the snacks they ordered, including the towering, cherry-covered dessert in question. The willpower to carry on a casual conversation while accompanied by such a massive bowl of ice cream is seriously impressive. Let's just hope the leftovers were carted off for the rest of the guys to enjoy.

"The food on dates is usually good, but the catch is that you aren't supposed to eat it! No one wants to watch people stuffing their face on a date," Jaclyn Swartz, who appeared on Ben Flajnik's season of The Bachelor along with Bachelor Pad and Bachelor in Paradise told Refinery29 in 2017. "Instead, we eat before the dates, as we are getting ready."

Still, that doesn't explain why producers chose to send Tayshia and Ivan enough ice cream to feed a small nation.

Add it to the list of things about The Bachelor we'll never fully understand.