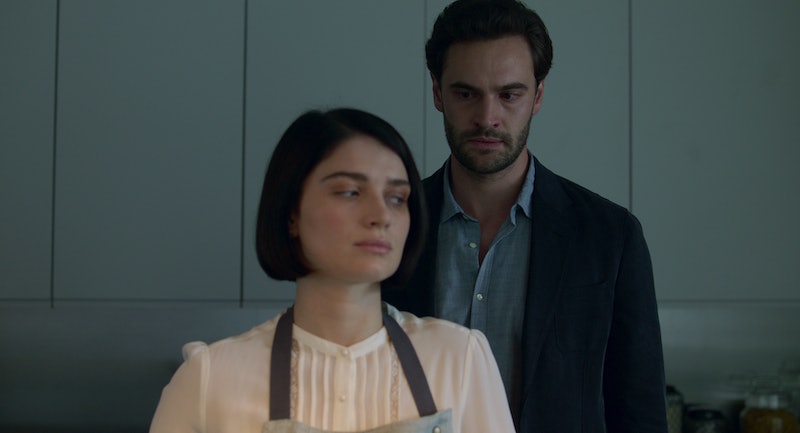 If you read Sarah Pinborough’s book Behind Her Eyes, you’ve already lived through #WTFthatending once before. When the novel debuted in 2017, the hashtag was both an effective marketing strategy and a Twitter shibboleth for readers who had survived the wild and twisty novel only to arrive at an even nuttier, more disturbing ending. With the Netflix adaptation of Behind Her Eyes premiering this week, it’s time for #WTFthatending round two. Let's break it down that wild finale and the lingering questions left in its wake (spoilers ahead, obviously).

So, how does Behind Her Eyes end?

With a BANG. When the series starts, the borderline crazy Adele (Eve Hewson) and her psychologist husband David (Tom Bateman) — who together once covered up the death of Adele's friend Rob — move to London, where David almost immediately starts an affair with his assistant Louise (Simona Brown). At the end of the series, Adele is dead and David gets married to Louise, who is really Rob in Louise’s body. Also, it was really Louise who died in Adele’s body, because Adele has been dead in Rob’s body THE WHOLE TIME.

Let’s backtrack. Adele (The Real Adele) meets Rob when she’s briefly institutionalized following the death of her parents in a fire at their gigantic family estate. She confesses to Rob that she blames herself because at the time of the fire, she was too busy astral projecting her soul into the atmosphere to smell the smoke. Astral projection is, of course, the psychic process by which a person suffering from night terrors can separate her soul from her corporeal form to revisit places she’s been while awake. Adele teaches Rob this nifty new trick, and eventually he suggests they exchange bodies, just for a sec, just for fun. Except it’s not for fun! Rob in Adele’s body kills The Real Adele in Rob’s body with an overdose of heroin and throws his own body into the bottom of a well. Installed in Adele’s body, Rob is free to be with her fiancé David, whom he's always adored, and enjoy Adele's tremendous wealth. To keep David close, he makes him complicit in the cover-up of Rob’s (really Adele’s) murder.

But the ruse is hard to keep up. Rob isn’t convincing as Adele, and the romance between David and Adele fizzles. They stay together only because David would rather be married to Adele than go to prison. UNTIL HE MEETS LOUISE, who also happens to suffer from night terrors. Adele (really Rob) befriends her husband’s lover and slowly teaches her astral projection. When David is ready to turn himself into the police to find true love with Louise, Adele (really Rob) tricks Louise into astral projecting to save her (really his) life. Meanwhile, Rob installs himself in Louise’s body, leaving Louise no other vessel than Adele’s body, like it's a game of body-swapping musical chairs. Rob in Louise’s body kills The Real Louise in Adele’s body with an overdose of heroin and, this time, a suicide note. We see where this is headed, do we not? Installed in Louise’s body, Rob is free to be with her lover/boss David and enjoy the tremendous wealth he’s set to inherit from Adele’s death. To keep David close, he marries him. Again.

Doesn’t David suspect something is up when the women he loves have incredible personality shifts right around the time of their nuptials?

What will Rob do with the perceptive Adam?

Personally, I want to believe Adam will be spared. The show goes out of its way to demonstrate Louise’s ex-husband is a good dad who is eager to be in Adam’s life. As the situation deteriorates, Rob could engineer for Adam to spend more and more time with his father, and David won’t notice that’s very strange because David isn’t much of a noticer. Or, you know, Rob-as-Louise could decide he needs to kill Adam, which obviously would be more dramatic and more upsetting.

What about the gender and racial politics of all this body-snatching?

It's a little uncomfortable, to be sure. The show seems like it’s going to be about a crazy, cold, and calculating rich white woman out to get her husband’s new Black girlfriend, but is actually about a conniving gay man doing the same thing, which is weird, but honestly feels less weird when you’re watching because it’s clear that the show has little to say about any of that. David is just a nice white man no one can resist, apparently.

So was it good?

I truly do not know. But I can say that in the two weeks since I’ve watched it, I’ve thought about it every single day.