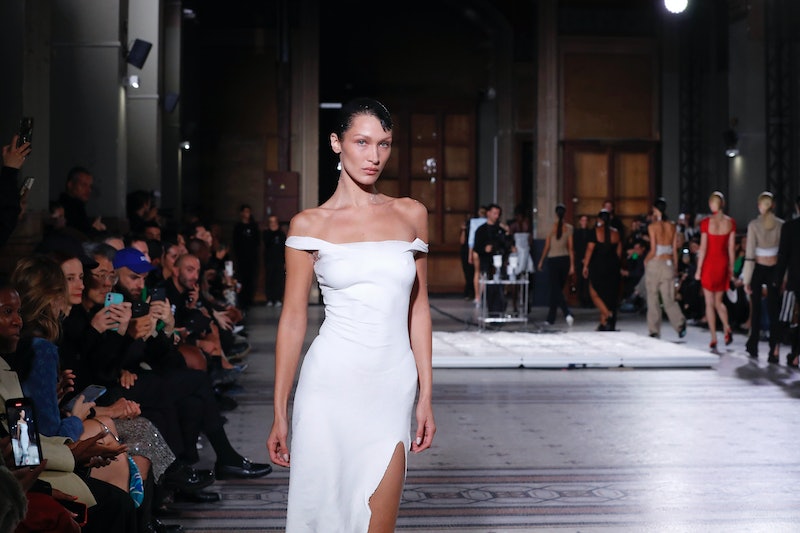 Now that’s how you pull off a show-stopping moment. Bella Hadid closed the Coperni Spring/Summer 2023 Paris Fashion Week presentation on Sept. 30 wearing a one-of-a-kind bodycon number that was quite literally made for her: A team sprayed — yes, sprayed — on the chic, white slip dress mid-show, right on the runway in front of a crowd that included Kylie Jenner.

This wasn’t your typical hardware store spray-paint, though. The French womenswear designers used Fabrican Spray-on fabric, a canned liquid that solidifies into a wearable material when applied directly onto the wearer’s body. In addition to producing spray-on clothing, the technology, which has been around for nearly two decades, is also used to create everything from medical patches to spray-on hygiene wipes, per the London-based company’s website.

Covering her chest with one arm, Hadid entered the room in a pair of white underwear, and, after a quick application, she was runway-ready in an off-the-shoulder asymmetrical white dress that even included a leg slit. The Coperni fashion show was dedicated to “women of this world,” per Harper’s Bazaar, with designers Sébastien Meyer and Arnaud Vaillan writing in the show notes, “To you, women who transcend your body and never lower your gaze before the barbed wire of morality.”

Afterward, Hadid wrote in her Instagram stories that she had “no words” for now but thanked everyone “for all of the love” she was receiving. “[T]here is no person more important than the next,” she added, noting that “none of this could happen without the passion, hard work and dedication” of the entire Coperni team, including Meyer, Vaillan, and stylist Helena Tejedor. “I will think of this moment forever.”

Meanwhile, Jenner also wrote that Hadid’s fashion moment “was special to watch,” in her own Instagram story. In fact, the Kylie Cosmetics founder even contributed to Coperni going viral in April when she carried the brand’s Swipe bag, which is made out of blown glass. In another stroke of coincidence, Gigi Hadid debuted that season’s “it” bag — with which Doja Cat and Tinashe also accessorized their 2022 Grammys looks — during Coperni’s autumn/winter 2022 show in March.

For some, the out-of-the-box, experimental design called to mind Alexander McQueen’s Spring 1999 show, during which model Shalom Harlow spun on a wooden turntable while two robotic arms sprayed her multi-layered white dress with black and neon-yellow paint. “That’s something no one will forget,” Vogue’s Sarah Mower, who was at the McQueen show, recounted in 2018. “It’s a McQueen performance, a coup de théâtre that has made ever-living history, surely up there among the top 10 fashion show thrills of all time. No matter how many times you play it on video, the rawness and shock of it never diminishes.”

Hadid’s more recent sartorial spectacle was only a small part of her booked-and-busy Fashion Month in New York, London, Milan, and, finally, Paris, for other such brands as Victoria Beckham, Isabel Marant, and Burberry. Just as it was for the attendees, her spray-painted Coperni dress may very well be the model’s biggest stand-out moment this season — and one that will be difficult to top.