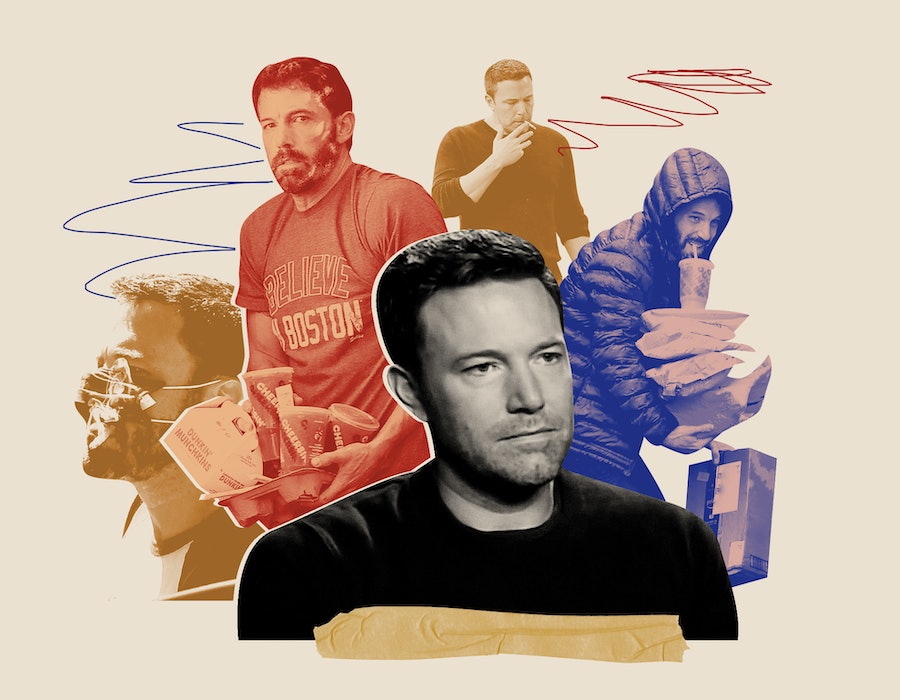 Every morning I wake up and wish for new paparazzi pictures of Ben Affleck. Ben walking his dog. Ben wearing a Boston T-shirt. Ben adjusting his too-small face mask to take a drag from a cigarette. I want all of it injected into my veins and framed for my living room wall (not kidding: I literally commissioned this drawing so I could hang it in my home).

I’m not alone. Affleck’s paparazzi photos have been a subject of fascination since the early 2000s, when both a string of bad movies and his tumultuous relationship with Jennifer Lopez turned him from a leading man into unyielding tabloid fodder. Things died down a bit after their breakup, but Affleck’s ability to be photographed looking like he's perpetually in the throes of an existential crisis stuck. Over the next two decades, multiple photos of him looking miserable made headlines. Ben Affleck vaping in his car. Ben Affleck gazing despondently into the ocean. Ben Affleck staring silently into the void during a viral interview for the critically reviled Batman v. Superman.

In the past, these images were popular because it was funny and alleviating that someone as famous and successful as Affleck appeared to be so sad. But in quarantine, that perception has shifted. Affleck spent most of 2020 in lockdown with his girlfriend Ana de Armas, who had recently made a splash in Hollywood due to her Golden Globe-nominated leading role in Rian Johnson’s Knives Out. Images of the couple galavanting around Los Angeles became the perfect balm for those of us mourning a time when celebrity gossip could still be the biggest news of the day. The pair were regularly memed and mocked for their obviously staged photoshoots (no two people should ever hug like this and it will haunt me until I die). But they seemed genuinely happy — a rare positive story during unprecedented times in which we had so little to look forward to.

As their relationship came to an end, the images of Affleck — now alone — became increasingly unhinged. On New Year’s Eve, multiple photos emerged of Affleck stepping outside in sweats to retrieve three large iced Dunkin’ coffees, a box of Munchkins, and a package. He looked aghast and sweaty, like how I look after two minutes of cardio. It oddly encapsulated exactly how everyone felt on the final day of 2020: tired, depressed, and startled at the sheer sight of another human being.

An Affleck photo dump has become the only experience comparable to seeing a movie in theaters: all of us in our respective dark little rooms, sharing in collective misery and miraculously sympathizing with a celebrity.

The photos kept coming in 2021. There was Affleck balancing yet another iced coffee on top of even more packages, and of course the pièce de résistance: a life-size cardboard cutout of de Armas being trashed outside of Affleck’s home, seemingly confirming their breakup after a little more than a year together. Now, Affleck no longer takes a little stroll in the California sunshine to get his massive coffees: he gets them delivered, along with many packages that he tries to carry inside all at once while glaring at the paparazzi with an “I am so sad and I hate you but I also sort of like that people are going to see this?” look on his face. An Affleck photo dump has become the only experience comparable to seeing a movie in theaters: all of us in our respective dark little rooms, sharing in collective misery and miraculously sympathizing with a celebrity.

We may still be laughing at Affleck's paparazzi photos, but now it's because we're actively relating to them. In 2021, Affleck has become the uniting symbol of these very strange, sad times: alone, constantly ordering delivery, and struggling to carry every package inside all at once.