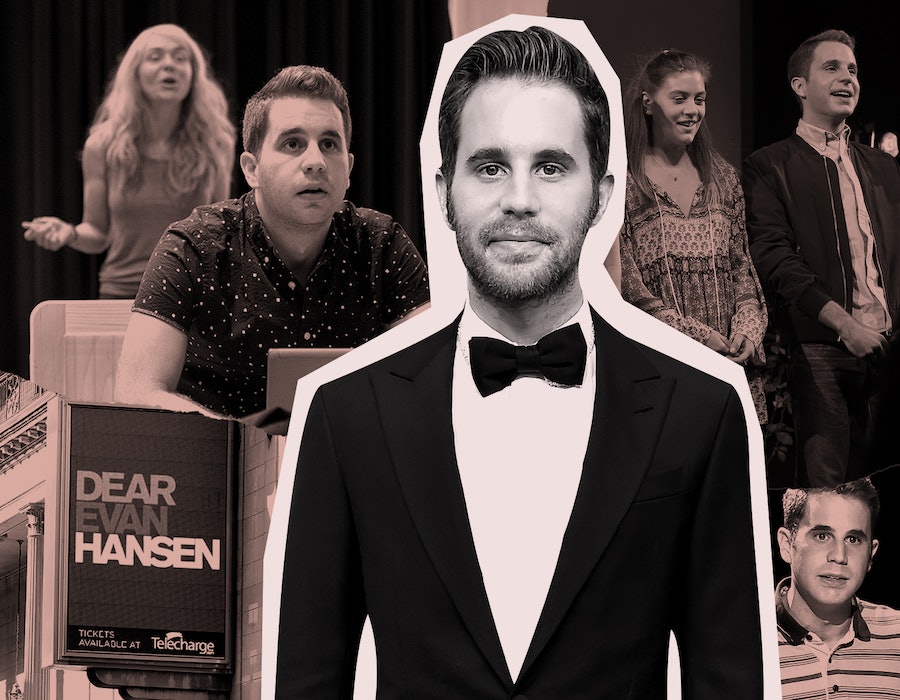 I spent the weekend driving around Los Angeles with my windows down, singing out loud to Olivia Rodrigo’s new album Sour, imagining that I had been wronged by a high school boyfriend. Her lyrics are specific and visceral (who among us hasn’t wished that they could yell at an ex that they were acting like a damn sociopath?) and make me feel like I am still a teenager, ready at any moment to drive to the mall to pick up a shift at California Pizza Kitchen, listening to “The Black Parade” on my powder blue iPod mini, hoping someone asks me to prom.

And so, I can’t really blame Ben Platt for shaving a good decade off his age to reprise his Broadway role, of socially anxious teenager Evan Hansen, in the film adaptation of his hit Broadway musical. As soon as the trailer for Dear Evan Hansen dropped last week, the snarkiest corners on the internet united with a single response: who does he think he’s fooling? With ear-length curls and the character’s now iconic blue polo shirt and hoodie, Ben Platt looks.... well, a tiny bit ridiculous.

Even the actor’s efforts (he remarked that he lost weight and shaved multiple times a day to banish even the faintest trace of stubble) didn’t achieve much when it came to making Ben Platt look less like a full adult man. At best, we’re facing a Stockard Channing-in-Grease situation. At worst: Kevin Spacey dressed up as Evan Hansen when he was hosting the Tony’s (OH JESUS CHRIST, WHY DID KEVIN SPACEY HOST THE TONY’S?). One can only hope the online bullying helped Platt tap into the high school mentality.

Adults playing teenagers is a time-honored tradition in film and television. There is, of course, the aforementioned Grease, which featured a 31-year-old Michael Tucci in the role of Sonny, who now in retrospect comes off less like a student and more like the gym teacher who gets fired for inappropriate conduct. A 33-year-old Channing as the chain-smoking Rizzo is so obviously an adult woman that her being cast as a high school student should be considered performance art.

And on TV, it’s all but a long-running joke that the well-glossed “teens” on shows like Gossip Girl and Glee were actually twenty-somethings, with fully-developed bodies and jawlines and zero trace of the awkwardness and acne that actual high schoolers near-universally share. Have you seen a high school student lately? They are babies! Literal children! I specifically remember one school dance where I wore a black dress from BCBG and I thought to myself, “I look so mature and grown up.” Well, I came across the photos the other day and I looked like the only thing I would be able to eat at a fancy restaurant would be off-menu pasta with butter and Goldfish crackers from a baggie that I brought from home.

All of which is to say, twenty-somethings as teens is not a new phenomenon, nor is it one that people usually remark upon. I think that what makes the Ben Platt situation slightly more jarring is that he’s been in the public eye for longer. In 2012, Ben Platt played a college student in the wildly successful franchise-builder, Pitch Perfect. Now a decade later, it’s harder to ask audiences to suspend their disbelief that he’s actually even younger when his public persona has evolved past “high schooler.” Bianca Lawson played a teenager on Pretty Little Liars even though she was 31, and it didn’t feel weird because she’s been playing a teenager. We’re okay with actors remaining the same age forever; in fact, we prefer it. Zendaya spoke openly about taking her role in Malcolm and Marie because she saw it as a chance to let audiences know that — although she played a high schooler on Euphoria and in the Spider-Man films — she was actually a 24-year-old woman.

Personally, I think it’s kind of sweet that they’re still having Ben Platt play the role he originated and won the Tony for, even though plenty of incredibly talented (and more age-appropriate) actors have taken on the Evan Hansen mantel on stage in recent years. Look, why not? Is his hair any more ridiculous than the premise of pretending to a dead boy’s family that you were actually friends with him and then going [checks notes] viral on Facebook for a speech you give at his memorial? No. And everyone in the world deserves the opportunity that we had in New York to see Ben Platt snot-sob through “Words Fail.” The memory of that snot will stay with me forever. That is the power of theater.

Plenty has been written about the dysmorphic effects on actual, real-life teenagers when the “peers” they see on screen are so adult and fully developed, but I also think it’s worth considering why projects cast adults for teen roles: sets are incredibly challenging, stressful workplaces. Acting is a difficult job, with long hours. The priority is never an actor’s homeschooled education or proper socialization — the priority is getting the shot because every wasted second is potentially thousands of wasted dollars. There is a reason the messed-up child star has become a cliché, because they sacrifice their childhood for one of the most bloodthirsty industries in the world and because fame is a socially acceptable form of public abuse for which the human brain isn’t equipped.

I feel like children should maybe never be cast in anything? Maybe adults should play all roles forever. If you ever need a toddler, just get Andy Serkis and a motion capture suit. Let’s get teenagers off of movie sets and into mall parking where they can do embarrassing photoshoots of each other. Your teenage years are for first kisses and learning how to drive and pretending to read Frankenstein for your AP Lit class, not for 16-hour shooting days and lawyers negotiating your percentage points on a multi-million-dollar film. The second word of show business is business. Studio executives do not care for the mental or emotional well-being of their performers. Let’s not be in such a hurry to dunk on Ben Platt’s silly hair that we inadvertently forget why labor laws exist. Olivia Rodrigo said it best: God, it’s brutal out here.

More like this
Rupert Grint Just Shared A *Major* Update About Ron Weasley’s Future
By El Hunt
Anne Hathaway Shared A "Thrilling" 'Princess Diaries 3' Update
By Darshita Goyal
Twitter Is Overjoyed By Angela Bassett’s Record-Making Oscar Nomination
By Maxine Harrison
Sandra Bullock’s Razzies Speech Proves She’s The Ultimate Miss Congeniality
By Sam Ramsden
Get Even More From Bustle — Sign Up For The Newsletter
From hair trends to relationship advice, our daily newsletter has everything you need to sound like a person who’s on TikTok, even if you aren’t.