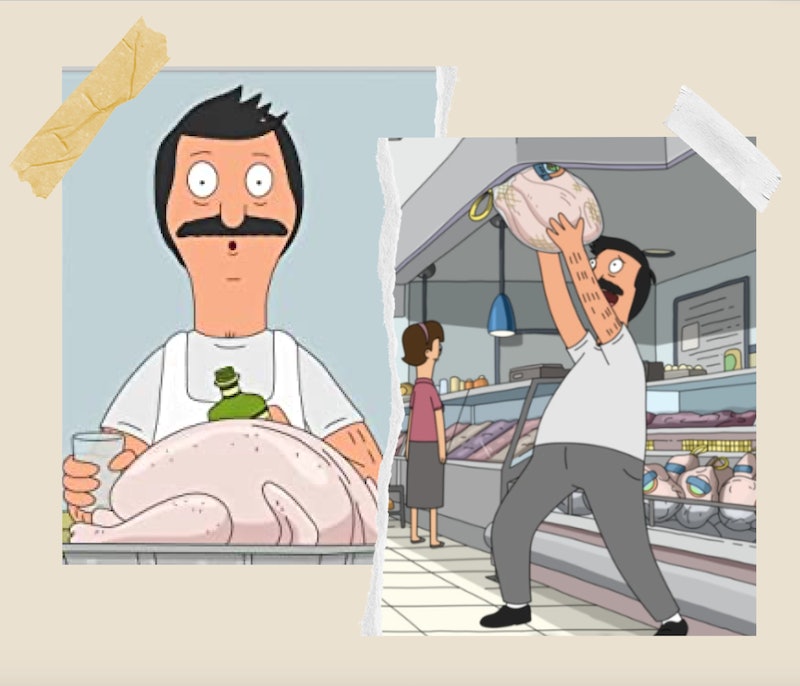 I'm a sucker for Thanksgiving TV episodes. My family watches them every year. I'm partial to The West Wing's "Shibboleth" and Friends' "The One Where Ross Got High." But as a seasoned expert, I'm here to tell you that only one show consistently delivers the best Thanksgiving episodes: Bob's Burgers.

Following the lives of Bob Belcher, his wife Linda, and their kids Louise, Gene, and Tina, Bob's Burgers is an animated series about a family struggling to keep their burger joint afloat while supporting each other through wacky situations and even wackier musical numbers. The brilliance of the show comes from its ability to create absurdity in even the most mundane scenarios, like when the Belchers visit Linda's parents and discover they live in a swingers retirement community or when Tina doesn't get asked to the school dance by a boy she likes and then develops a crush on a goose. But at its core, Bob's Burgers is about family. Bob and Linda are two of the most supportive parents onscreen, and each plotline, no matter how ludicrous, is grounded in the love the family has for each other. In other words, Bob's Burgers excels at Thanksgiving episodes because the best Thanksgiving episodes walk the line between ridiculous and heartwarming — and that's the show's bread and butter.

The Bob's Burgers Thanksgiving episode that best exemplifies this is Season 4's "Turkey in a Can," in which the family's Thanksgiving turkey bizarrely keeps ending up in the toilet. It can only be described as chaos: Linda's sister Gail and her cats are staying with the Belchers and setting off Bob's allergies, Gene has decided he wants to write a Thanksgiving carol with the help of Linda and Gail, and Tina is trying to convince her parents to let her sit at the adults' table.

Unlike the rest of his family, Bob takes Thanksgiving very seriously, often working overtime to cook the perfect bird and a delicious selection of sides...or at least that's the goal. With the Belchers, things rarely go according to plan. This year, Bob got his turkey a few days in advance in order to do a three-day salt rub, but the day after starting the rub, he wakes up to find the turkey — GASP — in the toilet! Everyone in the house denies responsibility for the attempted Thanksgiving sabotage, but Bob will not rest until he finds the culprit. And as they learn on Thanksgiving, it's actually Bob himself who's been putting the turkey in the toilet: he's sleepwalking because of his allergy medicine, and Tina's desire to grow up by sitting at the adults' table made him remember potty training her. When he's asleep, Bob thinks the turkey is baby Tina, so he sits her on the toilet to do her business and, voila! A turkey in a can.

It's an outlandish plot, but it's also oddly tender. Though the actual events of the episode aren't the most realistic, the core of the story is fundamentally relatable — a father worrying about his teenage daughter growing up. A similar thread runs through every Bob's Burgers Thanksgiving episode. Whether it's the Belchers trying to help Teddy organize his hoarder-esque apartment before his family comes to visit or Bob dragging an "injured" Gail through a snowstorm on a sled so she can spend Thanksgiving with them, the show's silliness always serves to illustrate the love that the Belcher family has for each other and their friends. And that's ultimately the recipe for the most successful Thanksgiving episodes. They have to be absurd enough to be entertaining and yet emotionally resonant enough to remind us of the reason for the holiday: taking time to express how thankful we are for the people we love.