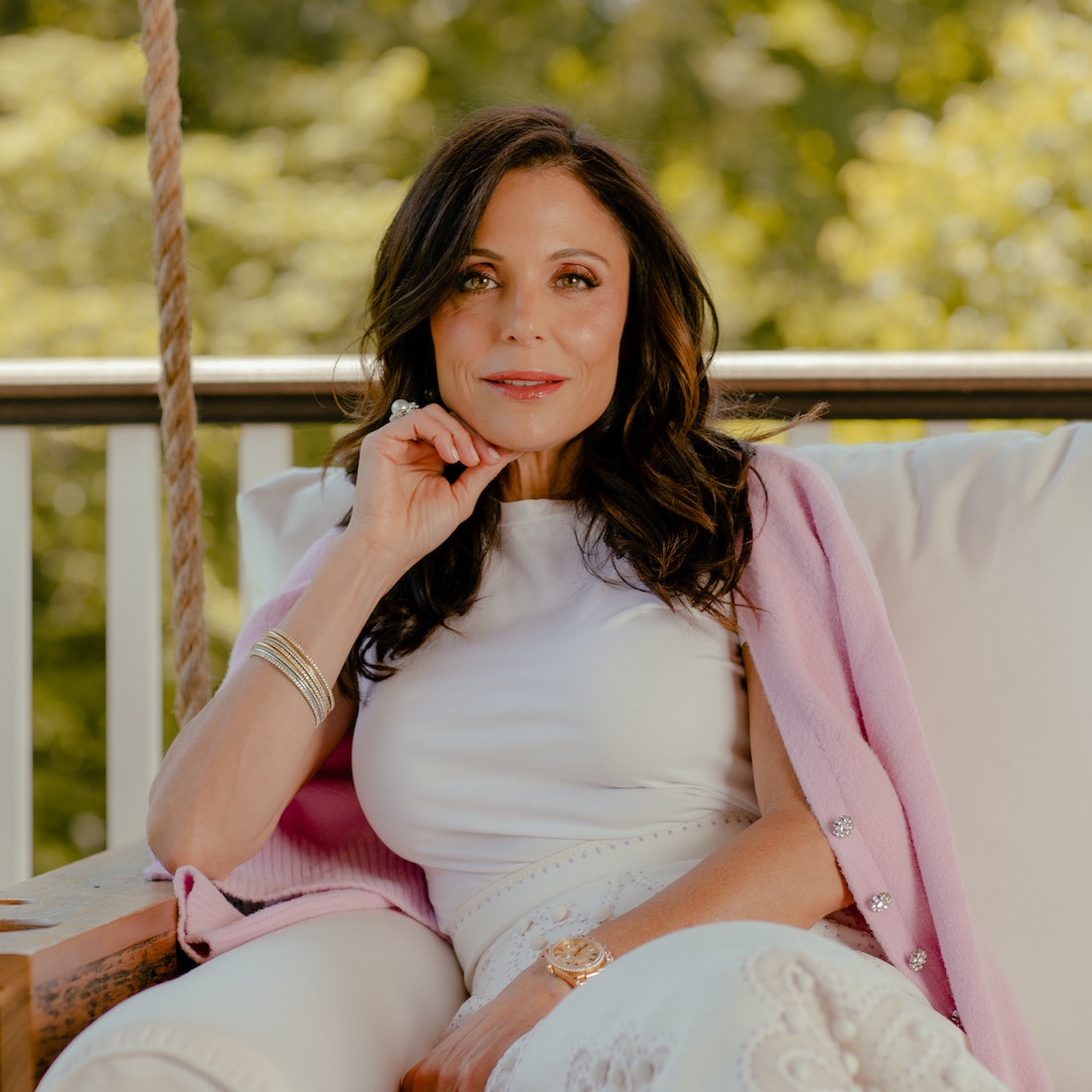 Bethenny Frankel wanted to do the interview on the porch, but it’s 90 degrees out, and her makeup needs to last all day. Standing still on 5-inch iridescent Louboutins, she looks out toward the driveway, where a vintage Bronco is parked. Then she looks back toward her door with a door-knocker in the shape of a bee.

“We better do this inside,” she says.

The author, entrepreneur, podcaster, and reality television star is practicing a time-management strategy she calls stacking. If Frankel needs to get her hair and makeup done — which she does not enjoy — she aims to stack multiple glam-requiring obligations. Same goes for the days Frankel’s daughter Bryn spends with her father, Frankel’s ex-husband: work commitments stacked floor to ceiling. When she rejoined the Real Housewives of New York in 2015, after a five-year hiatus, Frankel wouldn’t commit until it was written into the contract: no shooting on her days with Bryn. “I was in a nasty divorce and I couldn't switch a minute, so I wasn't missing a second of her life.”

Today, Bryn is at school and Frankel’s suburban Connecticut compound is the backdrop for a Bustle photo shoot, followed by one for her wine brand, Forever Young, interspersed with TikTok and Instagram content creation, directed by her assistant. Which is nothing, compared to some days. “It’s a short stack,” Frankel says.

Frankel is promoting her new book, Business Is Personal, which draws practical professional advice from her rise to fame and fortune. The high notes will be familiar to fans. The daughter of a racehorse trainer, Frankel worked as a nanny to Paris and Nicky Hilton, an assistant and hostess around Hollywood, and, eventually, a health-food chef to wealthy New Yorkers. At a polo match, she ran into Jill Zarin, who introduced her to the producers of The Real Housewives of New York. She became the show’s improbable fifth cast member while, at the same time, hustling to develop Skinnygirl Margarita, a low-calorie pre-mixed cocktail product. In 2011, Jim Beam’s parent company bought Skinnygirl for a reported $100 million, making Frankel richer than any of her advantageously married coworkers. She took Skinnygirl to new categories (popcorn, salad dressing, shapewear) and made a name for herself in the world of disaster relief with her charity organization, BStrong.

Frankel’s success proved that reality television could be a launchpad for entrepreneurs, but it put her in the awkward position of being a reality television star who seemed a little too smart to be on reality television. Frankel admits she heard as much when she first started to think about leaving the show. “Someone who I respect in the industry — who's one of the most powerful people in the industry — said, ‘There will be a time when people will wonder what the hell you're doing there,’” she tells me. “‘We might be reaching that time where people are going to be like, Why are you still there?’”

It’s a rhetorical question. “The reason to be there is money,” Frankel says. She reportedly made $1 million per season as of 2018, but when she left the show in 2019, she says, the money no longer justified the intrusion in her life. Or so her 12-year-old daughter tells her. “I say to her, ‘Look at this big house, it would cost money, and The Housewives would pay me a lot of money.’ Just to get her opinion. She's like, ‘Mom, you can't go back to Housewives. It's trashy. It's not you,’” Frankel says. “You don't apologize to your kids for working, but it did stick with me.”

In Business Is Personal, Frankel calls the decision to leave RHONY final, but she tells me that there is a theoretical salary that she wouldn’t be able to turn down. It would have to be good enough to justify the media circus surrounding the show. “You go on Watch What Happens Live, and it's a gotcha moment,” she says. “Someone's asking you about something that you said about someone [or there’s a] caller that calls in who's been pre-screened to ask you an embarrassing question.” What Housewives stars find hardest about the job, according to Frankel, is having to act as if the strange alternate reality produced by the show is their real life. “[Housewives] go on antidepressants and get anxiety. It's all about the money. People are getting anxiety and still doing it.”

But she’s not above the occasional, strategic use of the Housewives PR machine.

“Oooh, I have a question you could ask me,” Frankel says. “Of all the Housewives, who's ever donated [to BStrong]?”

Of all the Housewives, who’s ever donated to BStrong?

“That's a good one,” she says. “Ramona did Cameos for Ukraine without asking for credit. Jackie and Dolores and Margaret post about it, which is very meaningful. While I was on the show, Dorinda won a prize from a cooking show and donated it to BStrong. Carole donated, Luann donated, and Ramona donated. Tinsley really helped start it off, because she gave me a big, in the thousands, donation for Hurricane Harvey, which kind of, you needed that number to seem relevant to mention. She doesn't even know that. I mean, I thanked her then, but that was a moment. Tinsley and Scott, her boyfriend at the time. And that's it.”

Frankel is a world-class shit-talker, but she is self-aware, and she can be honest to a fault, which makes her more endearing than your average business self-help author. Refreshingly, much of her book is devoted to episodes that are not clear-cut wins. In a chapter on The Big Shot, the 2021 HBO Max reality competition miniseries about Frankel’s search for a vice president of operations, Frankel reveals that she wanted to recast the contestants, and that her partnership with MGM, the production company behind The Apprentice — prior to Housewives, she competed on the Martha Stewart edition of the show in 2005 — made the whole production feel too big and too contrived.

Frankel announced she was leaving the partnership several months after The Big Shot aired. Talking about The Big Shot now, Frankel praises MGM’s Mark Burnett for showing her how a series gets sold. But she says the production was an example of how “things on paper, things on your calendar, are not the same as in reality.” The debacle was further evidence of Frankel’s need for a second in command, but the winner of The Big Shot, Milokssy Resto, does not work for her. There was a disagreement about salary. Frankel tells me she currently employs a “consulting COO,” but she is still looking for own version of Huma Abedin, Hillary Clinton’s longtime political aide. “You have to be willing to get your hands dirty but also be sort of corporate and professional,” she explains. “Huma's definitely been with a lint brush, but then also speaking with intelligence at the White House.”

Making a show about her search for a VP seemed less personal than Housewives, but the production spun out into her personal life, and into the Connecticut home that she had just moved into with Bryn and her fiance Paul Bernon, a real estate, film, and venture capital investor. “Is there a world where I can do a studio show?” she says. “Something where it's like I show up over there in your house? I don't want everyone at my house.”

But here we are at her house, an invitation she has extended with just-perceptible effort, because of the heat, and because she owes a strong promotional showing to the people who worked on her book. Inside, a framed, calligraphed poster lists all of the home’s owners dating back to the 1700s. There’s row after row of dead WASP couples and then Bethenny Frankel. The decor is true to the period and region: floral wallpaper, china displayed in corner cabinets, and original wood shutters that smell like warm dust. Everything that fans of Real Housewives might think of as Frankel’s aesthetic (graffiti-influenced pop art, hand-painted Birkins, a lips motif) lives in a sunroom that was added onto the house in the 20th century. We’re seated in the kitchen breakfast nook, overlooking an outdoor spa — a “cheapo jacuzzi,” Frankel says, made to look “zen” with a custom wood encasement — and separated by a burning candle branded by the luxury resort Amanyara.

I’ve asked Frankel to talk about what it means to run a brand called Skinnygirl in 2022. “Oh, I love that. This is good. Stay here,” she says, rising to open the refrigerator. “I'm going to get some fruit.” The refrigerator door shelves are labeled to the inch. Not Dairy, but Cream cheese. Sour cream. Butter.

Frankel’s position is that Skinnygirl works as branding for products that serve as a size-conscious alternative to a different product. “These are products that are lower in calories and so it's allowing you to indulge more,” she says. Where Skinnygirl failed as a marketing proposition, she explains, was swimwear. How many women want to step into a dressing room with a bikini labeled “Skinnygirl”? Plus, Frankel’s first foray into swimsuits, under her Bethenny label, turned out to be so unflattering that she canceled the line post-production, eating some of the cost and, in her telling, causing Home Shopping Network models to break out in applause.

Back at the refrigerator, Frankel changes her mind about the fruit. “I’ll do this later,” she says. “Unless you want something?”

In Business Is Personal, Frankel writes that fear of getting canceled influenced her restraint with the branding “Skinnygirl.” But, in person, she tells me, “literally no one criticizes it.”

“It's always this thing that I think will come up and it's not, because no one really believes it. You know what I mean? I happen to be thin, OK? I'm sorry. I apologize. I'm sorry. Read the book.” Frankel’s first book, Naturally Thin, is an anti-diet diet book that describes her own history of disordered eating and recommends self-love, home cooking, and intuitive indulgence for long-term, sustainable weight management.

“I don't exercise,” she says. Her tone says: What more do we want from her? “I'm doing that for everybody. I'm not exercising. I'll do that. I eat crappy food. I'm doing that, too. I apologize.”

She’s making points faster now, and listening to her feels like trying to keep up with the legal disclaimers at the end of a pharmaceutical commercial.

After today’s wine shoot, Frankel needs to pack for Los Angeles, where she’ll attend the MTV Movie and Television Awards with Bryn on her arm. Frankel’s dress has just arrived from Oscar de la Renta. Her assistant lays a garment bag on the kitchen counter and unzips it to reveal a flared minidress in Skinnygirl red. “I never call in clothes. This sweater is H&M,” she says, gesturing to a pink cardigan draped over her shoulders.

“I just texted this guy, Fernando [Garcia], who runs Oscar de la Renta, to say, ‘What do you have?’ He sent me literally five pictures. I said, ‘I'll take that one.’” One of Frankel’s big complaints about the evolution of Housewives is that stars began to rely on professional hair and makeup and borrowed designer clothes to film everyday scenes, making the production less authentic. “I've literally seen people first seen on the Housewives to go through 20 [looks],” she says. She plans to ask the designer if she can buy the dress. “I don't like to rent. I'm not a renter in real estate or dresses.”

Frankel is nominated for Best Reality TV Return for The Big Shot, and she will receive a lifetime achievement — the Reality Royalty Award — for her entire body of TV work. I congratulate Frankel on the honor, and her response is so subtle in its shade that it’s not until I am back across the Connecticut border that I realize what she’s done.

“I like it because last year the whole cast of Jersey Shore got it. So I'm just one person. I'm not part of a cast.”