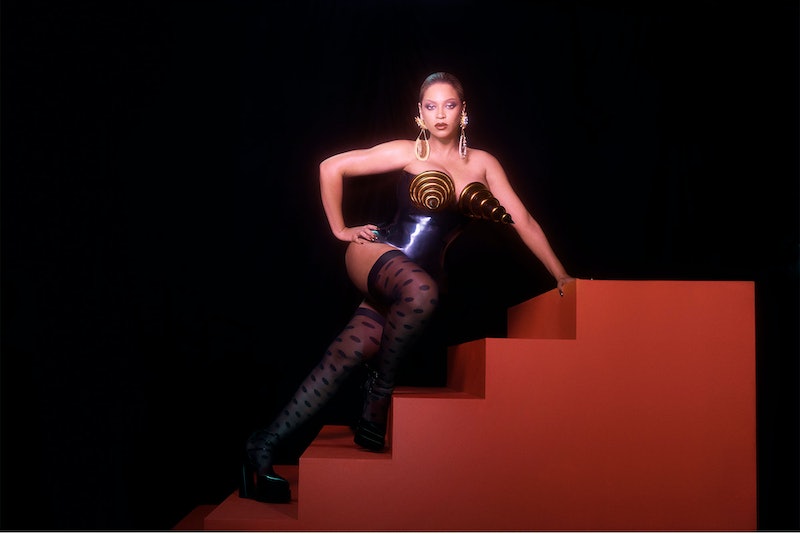 Beyhive, rejoice! Days before Beyoncé dropped Renaissance, she revealed that fans will be getting three installments of this artistic era. “This three-act project was recorded over three years during the pandemic,” Beyoncé confirmed. “A time to be still, but also a time I found to be the most creative. Creating this album allowed me a place to dream and to find escape during a scary time for the world. It allowed me to feel free and adventurous in a time when little else was moving.”

Beyoncé added that her intention “was to create a safe place, a place without judgment. A place to be free of perfectionism and overthinking. A place to scream, release, feel freedom. It was a beautiful journey of exploration.”

When she initially announced Renaissance in June, she deleted her social media profile pictures, signaling to eagle-eyed fans that something was on the way from Queen Bey. Even before then, she even slyly teased a renaissance was on its way in 2021 (“I feel a renaissance emerging”). So we can’t help but be hyper-vigilant of all the signs that point to more impending Beyoncé music.

From potential release dates to what the next installment could be (think a visual album akin to her Lemonade era), here’s what we know about the upcoming Act II album.

When it comes to album drops, Beyoncé has been known to release music without any promotion or heads-up to fans, often throwing them into an unanticipated frenzy. This surprise release strategy has now been dubbed “pulling a Beyoncé” whenever another artist tries it. However, with Renaissance Act I, she gave us a month or so from announcement to release to physically and emotionally prepare. So, whether or not she decides to announce the album the day it drops as a major surprise, or announce the release weeks before, remains unclear.

Fans are already guessing about when the next album will come out. “Beyoncé last song on her new album called “Summer Renaissance” and this is Act I (in the summertime) … does this mean Act II could potentially be coming in the Fall?” Twitter user @DaNayNayyy theorized.

Of her seven studio albums, Beyoncé has released three of them in fall months: B’Day in September 2006, I Am... Sasha Fierce in November 2008, and Beyoncé in 2013. Act II could be her next fall release and would arrive in time for holiday shoppers.

A press release for Act I noted that a visual album is on the way. When that drops isn’t known yet, and whether that will serve as Act II also remains unclear.

Many fans think that Act II will simply be another album. However, what if there are other kinds of projects Bey has coming? “Maybe what Beyoncé meant by ‘This 3 act project,’ is that the album is Act I, the visuals will be Act II, and the tour will be Act III…” Twitter user @PhenomenallyME3 suggested, referring to the fact that no music videos were released with the rest of Act I. Six years ago when she dropped her solo album Lemonade, she released an hour-long film with music videos.

Another fan posed the idea of it being a documentary instead of an album. One Redditor theorized that “Act ii will be a movie with songs interpolated like lemonade and act iii will be the stage show of the tour.” Someone else suggested that maybe the follow-ups to Act I will be remix albums.

When Beyoncé announced Renaissance, some people thought it could be a four-act project, with the visuals of the horse on the album cover alluding to the four horsemen of the apocalypse. However, the three-act announcement dispelled this theory.

If Act II is indeed an album, we have yet to learn what the tracklist is or how many songs will be on it. Apple Music dropped the skeleton of the Act I tracklist weeks before the official full list was out, with 16 songs packed with samples from other artists. She also released “Break My Soul” as a single from the album, which let us release the wiggle weeks ahead of the remaining 15 songs.

READ NEXT: Big Freedia Reveals The Real Meaning Of “Break My Soul”

If the second act is the previously noted visual album, then it’s possible that the tracklist for Act I will be similar to Act II — unless Act II ends up being all new songs accompanied by new videos.

In the meantime, we’ll be listening to Act I on endless loop.

This post will be updated as more information about Renaissance Act II becomes available.

More like this
The Best Memes & Tweets About Beyoncé’s Surprise “I’M THAT GIRL” Video Teaser
By Brian Anthony Hernandez
Beyoncé Is The First Woman To Have A No. 1 Album Since Adele Did Almost A Year Ago
By Radhika Menon
Beyoncé’s New Duet Made Her Mom Cry — & Is A Nod To An Old Destiny’s Child Song
By Grace Wehniainen
Britney Spears’ Comeback Song With Elton John Will Be Her First Single in 6 Years
By Jake Viswanath
Get Even More From Bustle — Sign Up For The Newsletter