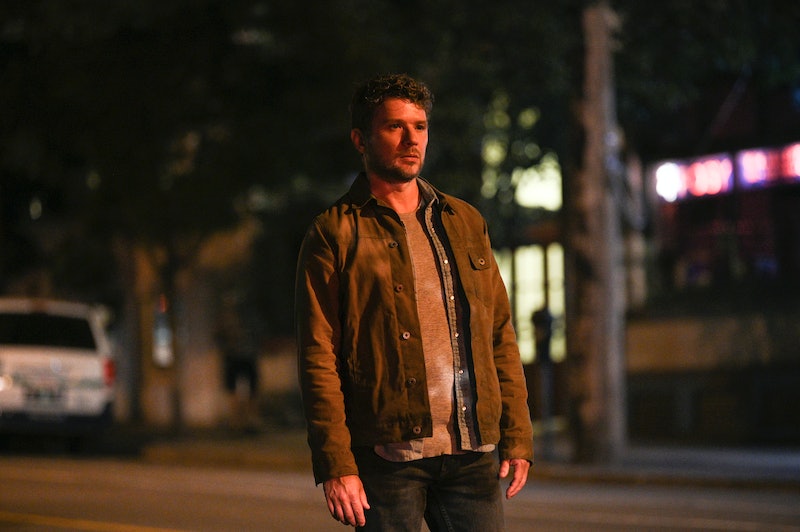 Spoilers ahead for the premiere episode of Big Sky. David E. Kelley's dramas are known for being twisty and unpredictable (see: Big Little Lies, The Undoing), and his new ABC drama Big Sky sets that tone right away. Despite being marketed as a new Ryan Phillippe show, the series premiere ends with Phillippe's character Cody being killed. He's shot in the head without warning by corrupt state trooper Rick Legarski (John Carroll Lynch).

If you spent several minutes after the episode trying to reason out how Cody could've survived a gunshot wound at point blank range, you're not alone. Big Sky is an adaptation of C.J. Box's The Highway, which focuses on private detective Cody and his ex partner Cassie Dewell (Kylie Bunbury) as they hunt down a truck driving serial killer. Box's books tend to overlap, and Cody was a character in two of his books,Three Weeks To Say Goodbye and Back of Beyond, before becoming the lead inThe Highway. Book Cody is a disgraced cop who's suspended after Cassie catches him planting evidence on a murderer. (He doesn't sleep with Cassie like in Big Sky; he's more of her mentor.) Investigating the disappearance of his son's girlfriend and the possibility of a trucker sex trafficking ring is a way for Cody to redeem himself in The Highway. But just as in Big Sky, Legarski shoots him before he can confirm his suspicions that the nearby church is involved with the abductions. Sorry folks, it seems like Cody really is dead.

Unlike the show, however, the death doesn't happen until halfway through the book, after Cody has put several pieces of the investigation together. Cody meets up with Legarski at a bar, where he perceives that the patrons are all silently communicating with each other. When Legarski climbs into the car with Cody, he pulls a gun:

"As Cody reached for the shifter, all of his senses suddenly came alive ... instinctively, Cody glanced over, but all he could see was the gaping silver-rimmed muzzle of a snub-nosed large caliber revolver an inch from his eye. The cylinder revolved, filled with dull lead bullets as the trooper pulled the trigger. There was a tremendous explosion of light and thunder. He could no longer see out of his right eye, but it was more than that. There was no pain, only tremendous silence. Then he was floating, light as air, as if his lungs had filled with helium. He passed through the sheet metal roof of his pickup into the night, which was no longer cold."

As Box explained to Crime Reads, the decision to kill off Cody was a twist he decided on as he was writing — and some readers still aren't happy about it. "I thought, no one will be prepared for what happens next," he said. "Over the years, I’ve heard many, many comments from readers about that twist. Most say they read that seminal page three or four times to make sure it actually happened. Some readers simply got angry with me and they’re still angry with me. Oh well."

Cody's early death in Big Sky is likely going to be even more divisive than his book fate, as is the decision to burn through half of The Highway's plot in the first episode. But Box told Crime Reads that changes were inevitable. "I’m very aware of the differences between writing a novel where I can control everything and turning that novel over to a large team of producers, writers, actors, crew, network executives, and so on," he said. "Changes are going to be made. It’s the difference between rowing a boat solo and going on a giant cruise ship."

Ultimately, he said that Big Sky is going to fully be Cassie's story, as Kelley purchased all of the Cassie Dewell-focused novels to adapt. "There will be elements of at least two of them in the initial season of Big Sky," he said. "Where it goes from there I don’t yet know." In subsequent novels, Cassie becomes deputy sheriff, and eventually opens her own private detective agency. Big Sky is clearly a whole different beast from The Highway, and we'll have to see what Kelley plans to do next.

More like this
15 Piping Hot Behind-The-Scenes Secrets From 'Great British Bake Off'
By Emily Dixon and Darshita Goyal
'Grey's Anatomy's New Intern Got Advice From Dr. Bailey Herself
By Grace Wehniainen
Caleb McLaughlin Details Racism From 'Stranger Things' Fans
By Radhika Menon
'The Rings Of Power' Episode 6 May Reveal Sauron’s Identity
By Grace Wehniainen
Get Even More From Bustle — Sign Up For The Newsletter