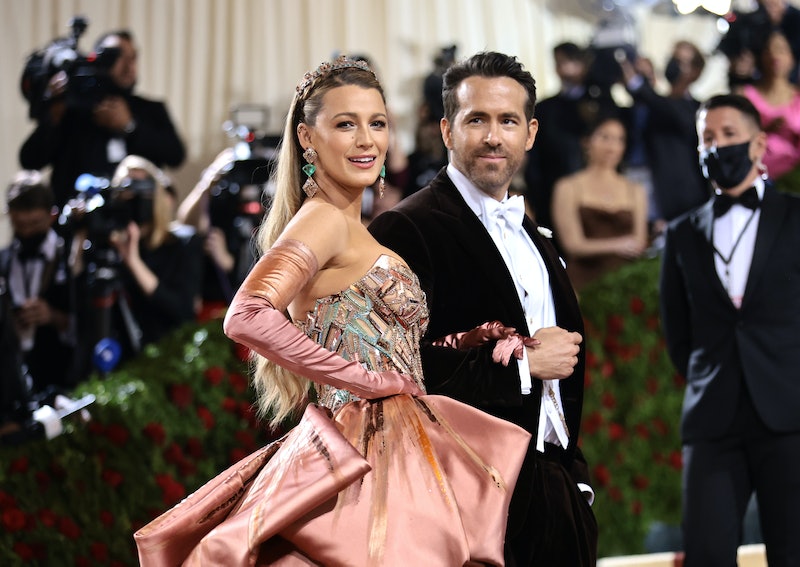 Blake Lively and Ryan Reynolds’ family is growing once more. The parents-to-be are expecting their fourth child together; Lively made an appearance on Sept. 15 showing off her baby bump at the Forbes’ Power of Women Summit, ultimately setting the internet afire with the announcement.

The couple, who are already parents to daughters 7-year-old James, 5-year-old Inez, and 3-year-old Betty, met in 2010 while filming The Green Lantern. It took them more than a year, a divorce involving Scarlett Johansson, and a casual fling with an A-list Hollywood playboy to actually start dating each other. Since tying the knot in 2012, Lively and Reynolds have welcomed three children who went on to famously inspire a Taylor Swift song. Now, another baby could mean Swift has another song about James, Inez, and Betty on the way — one of the greatest gifts from their decade-long relationship (aside from their effortless trolling of one another).

Here are the highlights of their friendship and relationship from 2010 to 2022.

Before they became romantic partners, Lively and Reynolds were co-stars in 2011’s The Green Lantern. The pair first appeared together at ComicCon in July 2010 to give a sneak preview of the film, they continued to charm fans during press appearances throughout the next year. The movie signified the start of their romance — although not immediately.

While filming and promoting The Green Lantern, Lively was still dating her Gossip Girl co-star Penn Badgley, and Reynolds was married to Scarlett Johansson. However, Reynolds filed for divorce in December 2010, and Lively split from the You star around the same time, clearing the way for their friendship to grow (but not before she dated Leonardo DiCaprio for a brief time).

Dating rumors started to swirl in October 2011, when Lively was seen leaving Reynolds’ Boston apartment in the wee hours of the morning. She was then seen visiting him on set of his movie R.I.P.D. The next month, Lively and Reynolds were seen leaving his apartment in Boston yet again, this time with his dog Baxter in tow.

At this point, Lively and Reynolds had yet to confirm their relationship, but they were spotted holding hands while shopping in his hometown of Vancouver, Canada, on Dec. 22, 2011, proving that the couple were spending the holidays with his family, and that usually only happens when romance gets serious.

It’s a miracle Gossip Girl didn’t leak this plan. Lively and Reynolds tied the knot on Sept. 9, 2012, in South Carolina, surprising fans who weren’t even aware they were engaged. The only people who seemingly did know, aside from their families, were Lively’s Sisterhood of the Traveling Pants co-stars America Ferrera, Alexis Bledel, and Amber Tamblyn, who were all in attendance.

“When Ryan first saw her, his face broke into a huge smile that crinkled his eyes,” a source told PEOPLE. “They just stared at each other with absolute love. Their faces were lit up with the candlelight, and it looked like something out of a romance movie.”

That month, in an interview with Allure, Lively still didn’t comment on her relationship, but she made it clear that she was at the best place of her life. “Right now, I’m so peaceful” she said. “I’ve never been happier in my life.”

September 2013: Blake Says Ryan Has Better Taste Than Her

In an interview with the now-defunct Lucky magazine, Lively praised Reynolds’ style and said he has only changed her in positive ways that she’s fully in control of. “I was recently asked how my style has changed since I got married, as if I was living under some sort of dictatorship,” she explained. “I’m very lucky to be with someone who has better taste than me. We influence each other in different ways.”

Lively opened up about her relationship with Reynolds in an interview with Vogue, saying she found a true partner in the actor. “Everything we do in life, we do together,” she said. “I get to share my life with the person he’s become, and we get to grow from there.”

Lively gushed about Reynolds to Marie Claire in September, calling him her “best, best friend” and hinting that they would be expanding their family as soon as possible. “We’ve never gone a week without seeing each other,” she explained. “If I could spit out a litter of kids, I would.”

Lively announced that she and Reynolds were expecting their first child by posting her first baby bump photo on her now-defunct lifestyle website Preserve. Later that month, Lively’s bump made its red carpet debut at God's Love We Deliver 2014 Golden Heart Awards.

Lively and Reynolds welcomed their first child in late December 2014, which US Weekly reported was an early birth. They managed to keep it a secret until after the New Year. “The baby came early but everyone is happy and healthy,” a source told the outlet, adding that they had their house in Bedford, New York, prepared for their arrival. In August 2015, Reynolds went on to praise his wife’s delivery room demeanor during an interview with Conan O’Brien. “At one point in the middle of the delivery, the doctor’s cell phone went off and she said, ‘Oh, no. Go ahead, take a personal call. Feel free.’ She was cracking jokes in the delivery room,” he recalled.

Months after the birth, Reynolds finally confirmed the name of his and Lively’s baby girl in an interview with TODAY. “It’s James. Everyone knows,” he said. “I didn’t want to be the first guy screaming it out to the media, because as we know, little girls turn into teenage girls and little teenage girls sometimes scan through the archives and go, ‘Why did you do that?’”

In true Reynolds trolling form, the actor took to Instagram on May 14 to share the first photo of baby James’ hand. “Thumb wrestling isn’t always fair,” he captioned the post. “Curiously, my hand is the small one.”‌

In an interview with Entertainment Weekly Radio, Reynolds revealed that before he started dating Lively, they went on a double date with other people. “We were buddies then,” he recalled. “I remember it was funny because for about a year after Green Lantern had come and gone and all that stuff, we were both single. We went on a double date. She was on a date with another guy, and I was on a date with another girl. That was the most awkward date, probably because we were just like fireworks coming across.”

On April 14, US Weekly broke the news that Lively was pregnant with her second child after she was seen “showing off her baby bump in a fitted wetsuit” on the set of her film The Shallows (unrelated to the Oscar-winning Lady Gaga song).

Lively and Reynolds gave birth to their second child, another baby girl named Inez, at the end of September 2016, but they kept their baby’s name secret for months again. Page Six reported that Taylor Swift was already en route to visit the couple and their newborn at the hospital, meaning Inez literally had A-list friends from the day she was born.

November 2016: Ryan Reveals When He Knew Blake Was The One

In an interview with British GQ, Reynolds recalled one of his first dates with Lively when he realized they were about to become very serious. “We were hanging out at this little restaurant in Tribeca that’s open really late, and this song came on and I was just like, ‘Want to dance?’” he recalled. “No one was in there, so it was just totally empty. And it was just one of those moments where halfway through the dance, it was like, “Oh, I think I just crossed a line.’ And then I walked her home. And, uh, you know, I don’t really need to go into what happened after that.”

December 2016: Blake Supports Ryan On the Hollywood Walk of Fame

When Reynolds received a star on the Hollywood Walk of Fame, Lively went to the ceremony with James and Inez, marking a rare public appearance from their kids. The guest of honor thanked his wife during his speech, calling her “the best thing that has ever happened to me” as she sat in the audience. “You make everything better. You make everything in my life better,” he said. “You’ve given me two of the most incredible children I’ve ever hoped to have.”

Lively posted a now-deleted Instagram photo of her, Reynolds, and James standing near the actor’s shiny new plaque. “Proud is a pitiful word to describe how I felt today,” she captioned the post. “@vancityreynolds The permanence of your impact is undeniable … Always has been, but now we have a fancy [star] to show for it.”

On Aug. 25, Reynolds rang in Lively’s 30th birthday by posting a photo from that year’s Met Gala — of just him. “Happy Birthday to my amazing wife,” he captioned the post, in which only a sliver of his wife’s face can be seen.

October 2017: Blake Gets Her Revenge

For his birthday two months later, Lively trolled Reynolds just as hard, posting a photo of Ryan Gosling and her husband, whose face she also cropped out. “Happy Birthday baby,” she wrote, which Reynolds took like a champ, commenting “Awesome” on the post.

Reynolds took to Instagram to show off the romantic Valentine’s Day cake that he made for Lively — out of glue. Nothing says love like an inedible cake.

Lively has proven herself to be just as adept at trolling her husband as he is with her. While promoting her movie with Anna Kendrick, A Simple Favor, Reynolds begged her to tell him the secret ending of the murder mystery via Twitter, and she had the best response. “Oh darling, of all the secrets I’m keeping from you, this should be the LEAST of your concerns,” she wrote back. “Trust me.”

May 2019: Blake Debuts Another Baby Bump

Lively and Reynolds announced that they were expecting their third child when she debuted her baby bump by surprise at the premiere of his film Detective Pikachu.

For Lively’s 32nd birthday, Reynolds posted an Instagram slideshow of sweet candid memories, specifically all of the photos where his wife was clearly unprepared for a picture. Now that’s true love!

Lively and Reynolds welcomed their third daughter in August 2019, but the world didn’t know about the birth until that October, when US Weekly broke the news that they had managed to keep it secret. Later that month, Reynolds confirmed her birth by sharing a photo of him and Lively with their newborn, whose face was shielded by a drawn smiley face.

After the release of her first surprise 2020 album Folklore, fans noticed that Swift used the names of Reynolds and Lively’s children James and Inez in her song “Betty.” Therefore, it was safe to assume that the couple had named their third child Betty if Swift had indeed used her friends’ children as characters in the song.

In a November interview with Entertainment Tonight, Reynolds said that him and Lively have had a happy marriage for so long because they’ve been able to share a great friendship for all of these years. “We don’t take each other too seriously, but we're also friends,” he said. “Falling in love is great, but do you like each other? That’s kinda the question you gotta ask yourself, you know, going into it. We’ve always liked each other. We grow together. We learn from each other. So yeah, I’m lucky to have a buddy in that.”

As co-chairs of the 2022 Met Gala, Lively and Blake walked the red carpet in style, with Lively revealing a second dress to look like “an ethereal, aquatic goddess.”

On Sept, 15, Lively showed off her growing baby bump on the Forbes’ Power of Women Summit red carpet. A due date or the baby’s gender has yet to be revealed, but Lively was all smiles.

This article was originally published on May 2, 2022