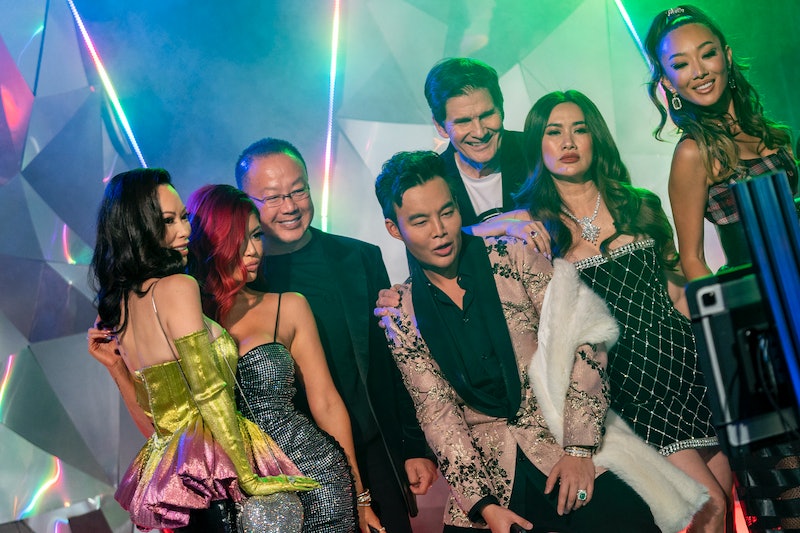 Picking up right after the events of last season, Bling Empire Season 3 saw Christine Chiu and Anna Shay’s continuing feud, as well as Kevin Kreider’s and Kim Lee’s relationship falling apart. “All the drama really continues to intensify and heat up,” Dorothy Wang told Page Six. “The feuds get feudier [sic] and there’s a lot of deep-rooted things that come out.”

Though there are plenty of storylines to follow up on, Netflix told Bustle that they haven’t announced yet if Bling Empire Season 4 is happening. We know there’s already a Bling Empire: New York spin-off in the works featuring Wang, so the L.A. cast may be taking a break.

There’s also been some behind-the-scenes drama that could affect a possible fourth season. Per People, Bling Empire star Kelly Mi Li filed a court complaint in April against the show’s producer, Jeff Jenkins, saying she was not given enough credit for the show. She claimed that she came up with the idea for Bling Empire in 2018 and even introduced Jenkins to the key cast members, who were from her own social circles. She said they agreed she would be paid a certain amount and named executive producer if the show was a success. While Li is listed as an executive producer, the court documents said that Jenkins and his production company failed to give her the “episodic fee of 25 percent, 100 percent of Jenkin's executive producer fee for each episode she produced with him, and a five percent annual increase” that was agreed upon.

In May 2022 — which is when Season 3 filming had already wrapped up — Li told KTLA that the case was still ongoing. Her issue was “with the production company,” she explained. “I love the crew I shot with, unfortunately it’s with the producer I took the project to. As of now we’re not filming at the moment, so we’ll have to take it day by day and see what happens. But I do believe in fighting for what you do believe in.”

It’s unclear if the original Bling Empire series will continue if these proceedings are still ongoing, or if this just means that a fourth season would film without Li — one of the most popular cast members on the show. Per Deadline, while Jeff Jenkins Productions is listed as an executive producer on the Bling Empire: New York spin-off, Li is not.

Here’s everything else we know so far about a potential fourth season.

Not only is it unclear if Li will return to the show, but a fourth season would likely see other cast shake-ups as well. It’s unlikely that audiences will see Andrew Gray again, for example. Though he reappeared in Season 3 looking for reconciliation with Li, he proved to still be a divisive figure on the show. The show also introduces new faces like actor Lewis Tan, who shows up as Kim Lee’s date, and Devon Diep, Kreider’s ex. Diep and Kreider get back together at the end of Season 3, but it’s unclear how much Diep, or even Tan, will feature in a future season.

Compared to other Netflix shows, Bling Empire has a pretty inconsistent debut schedule. Season 1 dropped in January 2021, while Season 2 premiered in May 2022 and then Season 3 came five months later. Li said in May that they hadn’t started filming for any new seasons though. Reality TV can take anywhere from six months to a year to produce, so it’s possible a new season could drop any time between spring 2023 to fall 2023.

This post will be updated as more details on Bling Empire Season 4 become available.

More like this
Everything To Know About A Potential 'Back In The Groove' Season 2
By Brad Witter
Are Kayla and Seb From 'Too Hot To Handle' Still Together?
By Karen Fratti
Julia Haart’s New Company Haart Sphere Still Doesn’t Seem To Exist
By Brad Witter
Everything To Know About The 'Harry & Meghan' Netflix Documentary
By Jake Viswanath and El Hunt
Get Even More From Bustle — Sign Up For The Newsletter