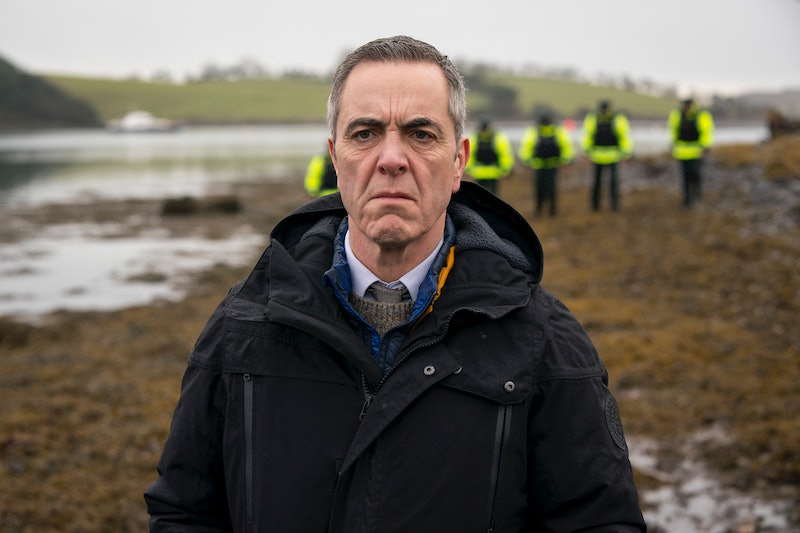 Spoilers ahead for the Bloodlands season one finale. Bloodlands on BBC One wrapped on Sunday, March 14, and most fans agree that this was one of Jed Mercurio’s most complex plots to date. Just when we thought things were getting a little too predictable, Mercurio and writer Chris Brandon threw in a curveball that no one saw coming. At the end of Bloodlands episode two, the whole case was turned on its head when our lead investigator was revealed to have a few skeletons in his closet – but is Tom Brannick Goliath? Let's look at everything we know so far.

Goliath is the code name for an assassin who is suspected to have kidnapped and murdered four people at the end of The Troubles back in the 1990s, including the wife of DCI Tom Brannick.

Throughout series one, there were a fair few suspects for who Goliath could be. We know he or she was someone on the "inside" thanks to their knowledge of police activity and the fact that they were able to make the disappearances of their victims look like runaways.

DCS Jackie Twomey was definitely one to watch for the first two episodes, as was Pat Keenan and, eventually, Tori Matthews. However, by the end of episode two, our number one suspect was the very man who we thought had made it his life’s mission to capture Goliath: Tom Brannick.

Towards the end of the second Bloodlands episode, Brannick brought Adan Corry to Strangford Lough, where three of Goliath's victims were buried back in the 1990s, including Adam’s brother David. Brannick wanted to find out who Corry has been talking to about the Goliath case.

When Corry refused to tell Brannick the identity of his confidant, things got a little tense. And then Corry started to piece together a few pieces of information: why was Brannick questioning him alone? Why didn't he take him into police custody? And then there's the necklace...

When Goliath's three victims were discovered, one of them was wearing an owl necklace with an "E" on the back. Both Brannick and his wife owned matching owl necklaces when they were married. At first it seemed obvious that Emma was murdered while wearing the necklace but soon we learn that really it was Corry's brother David who had it around his neck when he died.

Corry suddenly realised: his brother had an affair with Emma before both of them disappeared. And when he confronted Brannick about this, and accused him of being Goliath, the DCI shot him.

In episode three, Brannick does all he can to hide his connection with the Corry murder. He begins a campaign to pin the blame on Twomey and have everyone believe the DCS is in fact Goliath. We learn that Twomey did have some connections during The Troubles but it seems that was the extent of his wrongdoing. However, Brannick’s plan is successful and the DCS is arrested at the end of episode three.

And just when we think things can’t get more complicated, Torri Matthews is brought into the mix. We met Matthews in episode one, and she seemed to be a potential love interest for Brannick. Since then, though, we’ve discovered she is the daughter of one of Goliath’s victims and was the person behind Pat Keenan’s kidnapping in episode one.

When Brannick discovers all this – plus the fact that Matthews was the person talking to Corry about Goliath – he befriends her, asks her not to pursue Goliath, and convinces her to share any evidence she has about the assassin’s identity.

In the final episode, things begin to unravel for Brannick.

Matthews discovers the truth and forces Brannick to confess to the murder of her dad, Father Quinlan, as well as another Goliath victim, Joe Harkin. Brannick says he only murdered Harkin and Quinlan because he believed he was being blackmailed by David, who was holding his wife captive. Later he found out that David and Emma were actually working together. He killed David and told his wife to disappear, which she did.

However, in a final twist, Brannick has Matthews killed and once again manages to escape without the truth being revealed.

What We Know Heading Into Bloodlands S2

So it would seem obvious, right? Brannick is Goliath, but only because he was forced to be.

Well, let’s not be too hasty. What we’ve learnt throughout series one is that Brannick is not to be trusted. He has a lot of secrets that he’s spent years suppressing and viewers shouldn’t be surprised if there’s more to his story than what he’s confessed so far. There is still one burning question that needs answering: where is Emma Brannick? She will surely hold the key to who Goliath really is and what Brannick has to do with the disappearances of the assassin’s victims.

All I can say is, bring on season two.

This article was originally published on Feb. 28, 2021