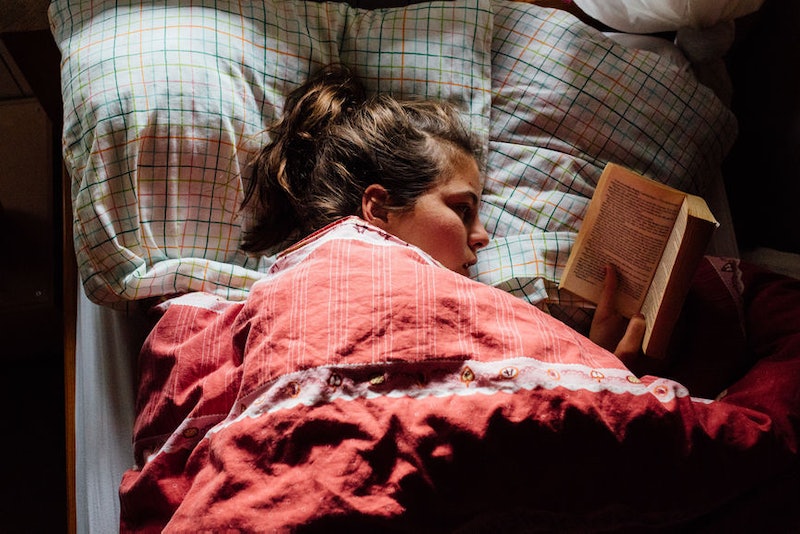 The idea behind dream interpretation is simple: Decode the symbols in your dreams, and you’ll understand what you’re subconsciously struggling with. No matter how strange your visions may appear on the surface — like riding around on the subway naked, or a NSFW with your boss (yikes…) — champions of dream interpretation promise that there’s a deeper meaning behind them. If you’re curious to learn more, then perhaps it's time you turned to one of these books about dreams.

Many people dream about the same things — family, money, work — and there’s a good reason for that. Dreams, as many psychologists and scientists theorize, help the mind deal with and process everyday emotions, conflicts, and stresses. In other words, understanding your dreams might very well help you understand yourself.

Still not convinced? Don't knock it until you've tried it. Even if you’re not completely sold, it can still be fun and informative to see what experts from around the world have to say about your dream life. So, think you're ready to learn how dreams might relate to your waking life? Check out these 13 books about dream interpretation below.

1. The Interpretation of Dreams: The Complete and Definitive Text by Sigmund Freud

'The Interpretation of Dreams: The Complete and Definitive Text' by Sigmund Freud
Basic Books

As Sigmund Freud put it in this now classic work, “The interpretation of dreams is the royal road to a knowledge of the unconscious activities of the mind.” The Interpretation of Dreams is no longer taken as gospel in the psychology community, but it’s still fascinating to read Freud’s very particular guide to dreaming, which covers everything from dream theory to dream interpretation, complete with case studies from his own practice.

2. Sleeping, Dreaming, and Dying: An Exploration of Consciousness by The Dalai Lama of Tibet

'Sleeping, Dreaming, and Dying: An Exploration of Consciousness' by The Dalai Lama of Tibet
Wisdom Publications

The Dalai Lama’s book, Sleeping, Dreaming, and Dying, explores the ways in which dreams have been examined in the Eastern world, as well as how these historical threads tie into Western studies of the subconscious. As suggested by the title, His Holiness focuses on three key areas of the human experience: sleep, dreams, and death.

3. Psychology of the Unconscious by Carl Jung

'Psychology of the Unconscious' by Carl Jung
Dover Publications

Carl Jung, like his mentor Freud, helped bring the study of dreams into the mainstream. The Swiss psychologist has a number of published works on dreams, and Psychology of the Unconscious is one of his most famed works. Written in 1912, this book lays out Jung’s theories for how our subconscious manifests symbolically in consciousness, and how it affects the human psyche as a whole.

This journal and workbook lets you be the author. Designed specifically for Black women, the Shadow Work Journal and Workbook explains the art of “shadow work,” which helps users tap into the most repressed parts of their subconscious minds. With over a hundred journaling prompts to help readers do just that — and plenty of blank pages to fill with thoughts and feelings that emerge in the process — this book promises to help beginners master the basics.

5. Where Dreams Come Alive: The Alchemy of the African Healer by Lynne Radomsky

'Where Dreams Come Alive: The Alchemy of the African Healer' by Lynne Radomsky
Chiron Publications

In this book, clinical psychologist Lynne Radomsky delves into the world of indigenous Zulu healers from South Africa, Namibia, and Botswana. Throughout Where Dreams Come Alive, the author describes how these healers have historically helped channel “a creative individuation that demonstrates the autonomy of deep psychic processes” — a practice that the author argues has parallels in Western studies.

6. Lucid Dreaming: Gateway to the Inner Self by Robert Waggoner

'Lucid Dreaming: Gateway to the Inner Self' by Robert Waggoner
Moment Point Press

If you have ever been curious about lucid dreaming — that’s dreaming while knowing that you’re dreaming — Robert Waggoner's Lucid Dreaming: Gateway to the Inner Self is a great place to start. Told in an autobiographical form, Lucid Dreaming breaks down the five phases of lucid dreaming and explains how to master them all. Intriguing and inspiring, this is a handy guide for beginners and experienced lucid dreamers alike.

7. The Ultimate Dictionary of Dream Language by Briceida Ryan

'The Ultimate Dictionary of Dream Language: Symbols, Signs, and Meanings to More than 25,000 Entries' by Briceida Ryan
Hampton Roads

The Ultimate Dictionary of Dream Language is a useful handbook to keep nearby. Briceida Ryan’s book is an alphabetical guide to interpreting dream imagery: Whether you want to understand what it means when you dream about sex, violence, or Great White Sharks, this extensive, easily searchable tome will almost certainly have the answer. With 25,000 possible dream symbols listed and analyzed, it’s among the most comprehensive books of its kind.

8. The Art of Dreaming by Carlos Castaneda

'The Art of Dreaming' by Carlos Castaneda
William Morrow

Anthropologist Carlos Castaneda (allegedly) spent over a decade shadowing a Yaqui “sorcerer” in the mid-20th century. Castaneda imparts some of what he learned in The Art of Dreaming, which purports to teach readers how to control their consciousness while sleeping. The key is in mastering “total awareness” of one’s subconscious, which can be achieved in seven steps. Whether or not Castaneda really spent all that time with Yaqui “sorcerer” is still up for debate, but The Art of Dreaming is a fascinating read regardless.

9. The Oracle of Night: The History and Science of Dreams by Sidarta Ribeiro

'The Oracle of Night: The History and Science of Dreams' by Sidarta Ribeiro
Pantheon

“What is a dream?” is the central question of Sidarta Ribeiro’s The Oracle of Night. Ribeiro, a neuroscientist and founder of the Brain Institute at Universidade Federal do Rio Grande do Norte in Brazil, looks to evolution, societal factors, and the personal subconscious to explain the nature of dreams. From ancient cave drawings to today’s leading scientific theories, The Oracle of Night offers a sweeping chronicle of how dreams have shaped humanity and the world.

10. The Dream and the Underworld by James Hillman

'The Dream and the Underworld' by James Hillman
Harper & Row

Simply put, Jung walked so James Hillman could run. Hillman’s studies expand on Jung's theories of archetypal psychology, and is credited for founding the movement associated with such ideas. Dovetailing off his previous works The Myth of Analysis and Re-Visioning Psychology, Hillman’s 1979 book The Dream and the Underworld further elaborates on Jung’s original findings, and argues that dreams aren’t formulated at random. He also argues that the “soul” plays a big part in the human psyche.

Ever dream something so wild or off-the-wall that it makes you briefly question your sanity? The Pagan Dream Guide aims to clarify the oft-confusing imagery seen in dreams. While the author argues that the dreamer has the most authority to interpret their subconscious, this comprehensive guide can help readers work through their dreams and the subconscious feelings that underlie them.

12. Why We Dream: The Science, Creativity and Transformative Power of Dreams by Alice Robb

'Why We Dream: The Science, Creativity and Transformative Power of Dreams' by Alice Robb

In her book, former New Republic staff writer Alice Robb tries to answer an intractable, age-old question: Why do we dream? Even though all humans dream, and an overwhelming number remember their dreams the next morning, much about this universal experience remains shrouded in mystery. Why We Dream draws on years of scientific research to explain why dreams matter, and how readers should go about interpreting their own nightly visions.

Stephen LaBerge and Howard Rheingold’s Exploring the World of Lucid Dreaming examines the phenomenon in depth, and also offers tools for maintaining conscious awareness while in a dream state. This tome draws on LaBerge’s own research at Stanford University, and cites studies from a myriad of sources, from Tibetan yogis to internationally-renowned dream scientists.

This article was originally published on June 19, 2015