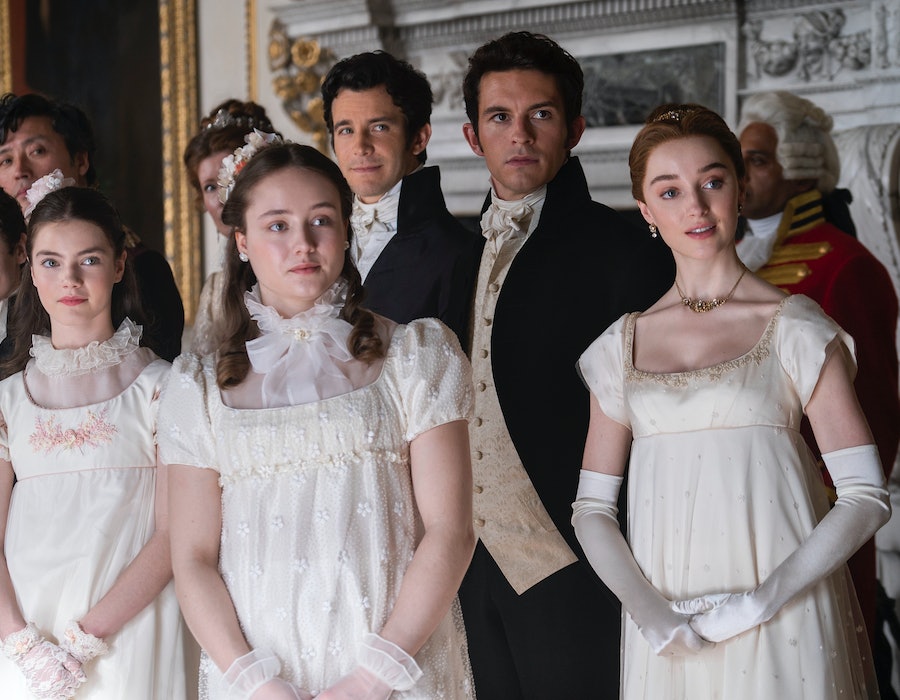 Making the first hit is hard; making the second hit is harder. Take it from Chris Van Dusen, the showrunner of Bridgerton. After the first season rocketed to the top of Netflix’s most-watched charts, with 63 million households tuning in worldwide, Van Dusen was faced with the prospect of producing another grand-slam — this time, with the whole world (and more than a few higher-ups at Netflix) breathing down his neck.

“I think with all the success what naturally happens is a lot more opinions start to come up and start to be heard,” Van Dusen tells Bustle. “And so staying true to that original vision of mine, it became much more challenging because there was a lot more noise around me.” The fact that this season would be his last — he announced he was leaving the series in May 2021, with Jess Brownell would taking over — likely compounded the stress to get it right.

So he found a way to stick to his guns, and turned out a second season of what he calls “the period piece that I myself have always wanted to see.” That meant taking a few liberties with Julia Quinn’s The Viscount Who Loved Me, including reimagining the main love interest as Kate Sharma, a woman of Indian descent, and fiddling with the central couple’s romantic arc. The latter is partly to blame for what fans have noticed is a distinctly less steamy season, but Van Dusen doesn’t see it that way: As far as he’s concerned, it’s “even bigger and sexier” this time around. Regardless, his audience doesn’t seem to mind. This week, Netflix reported that Season 2 had racked up a whopping 193 million viewing hours on its first weekend — the best premiere numbers the streamer has ever seen for one of its original shows. Even if it’s lost some of its steamy scenes, Bridgerton kept its spark.

Below, Van Dusen discusses the making of Bridgerton Season 2, learning from historical consultants, and what it was like to say goodbye to the cast.

Lady Whistledown’s identity was revealed at the end of Season 1. Did it change how you conceptualized the structure of the show — as well as, obviously, Penelope's story — to know the audience was in on the secret this time?

I think off of that big reveal at the end of Season 1, it was really interesting in our Season 2 writers room that we were able to dig into and explore this whole other side of the Lady Whistledown operation. And what I find both so fascinating about Penelope's story, and Penelope's and Lady Whistledown in particular, and what we get to look at in the second season is she's basically invisible at these balls and when she's out in the marriage market, when she's amongst her peers. But then she gets to don her Lady Whistledown disguise and take on this other persona. And she suddenly gets to be much louder and more brash and really more visible than ever. And I feel like that comes with its own sets of pressures and complications that were really interesting for us to explore for Penelope this year.

Is it just me, or was the show less steamy this season?

I wouldn't say it’s less steamy this season. I think this season we're back with an even bigger and sexier [show] and even more escape to that time period. And I think we're telling a different story this season. I think we're telling Anthony Bridgerton’s story. And what happens with Anthony and Kate is very different than what happened in the story of Daphne and Simon. And I think that's in a really good way. That's really one of the things that got me so excited about this project in the first place.

Where did you get the idea to turn the Sheffields into the Sharmas?

I’ve said this many times before in Season 1, that Bridgerton is not a colorblind show. Race and color are very much a part of the world. It's a part of the conversation and Bridgerton really wouldn't be Bridgerton without the colorful world that the show is set in, as far as it being multi-hued and multiethnic, which means I wanted to create the show for a modern audience, and I wanted modern audiences to be able to relate to it. And that meant anyone watching would be able to see themselves reflected on screen.

So I actually knew in Season 1 the story I wanted to tell with Kate, and she was always going to be of South Indian, South Asian descent. And I assembled an incredible group of writers this year. We collaborated with a number of researchers and historians. And we all had the same goal of being as authentic as possible. And so that really — it was a natural continuation of this multi-hued and multiethnic, colorful world of Bridgerton that was created the first year.

Totally. I noticed that the show didn't really address the nature of India's relationship with Britain at the time. Did you ever consider alluding to it, or making that another layer to the story?

We didn’t, I don't think we’re doing anything more or less than what we did in Season 1 when it came to exploring Simon’s backstory or Lady Danbury’s backstory and how they became to be members of the Black nobility of this world. I definitely think we infused Season 2 with certain details linked to the heritage of our Sharmas. You hear Kate speak a little Hindi in the first episode. I think it's the first words that she says, that you hear her say. You see some of the traditions and rituals of this South Asian family throughout the season. And again, we worked really hard to show and hear things that aren't traditionally shown or heard in the period genre. And that's what I really love about the show. And again, it's what makes Bridgerton, Bridgerton.

When you create a multicultural world that is also based in history, how do you think about what to include in terms of the backstory — what you do need to explain and what you don't? Especially given that it’s a romance show, and it’s not going to be focused on political struggles?

Like you said, it's no secret that the show's based on a series of romance novels. And I was never interested in turning Bridgerton into a history lesson or a documentary... I wanted to look at this period of time and explore this intersection of history and fantasy and where those two things meet, and do it in a really exciting way. And I think that's where I got this idea of inserting Queen Charlotte into this world. I always wanted this show to be about more than just a single family. I wanted to see what happens outside of just the confines of Mayfair. And really, we're set in the 19th century, but I still wanted modern audiences to relate to it. And, again, making this show reflect the world that we live in today.

You mentioned working with historians. Was there anything that your researchers dug up this season that surprised you or got you really excited that you wanted to write into the show?

We had an amazing historical researcher, Dr. Priya Atwal, that really — we crafted Lady Mary's backstory into the season, as far as her falling in love with the clerk and running back to India with him. That was something that was heavily researched and I leaned on our historical advisors for.

Is it strange for you now that your time with Bridgerton is coming to a close?

Yeah. It's definitely — saying goodbye to everyone on set, that was difficult and emotional for everyone. Working so closely with these people over the past few years, you come to be a family and you come to love each other like a family does. But I'll always be in touch with them and I'm always happy to support Bridgerton in any way I can. I think the show's always going to be my baby. And I'm curious to see where the show goes from here. I think future seasons of the show will definitely be interesting for me.

I've had a very specific creative vision for the series, and I don't think that vision would've been able to be translated if I didn't put everything had into this show. I am a very involved, in the trenches showrunner. I was out, I was on set in the UK just about every day there these first couple seasons overseeing things down to the smallest of details. There's not a single script within the first two seasons of the show that didn't pass through my computer and go through my filter, rewriting them three, four, sometimes six times. And I say all that really because that's the way it had to be in order to realize a singular cohesive creative vision. So I'm certainly curious to see where the show goes now.