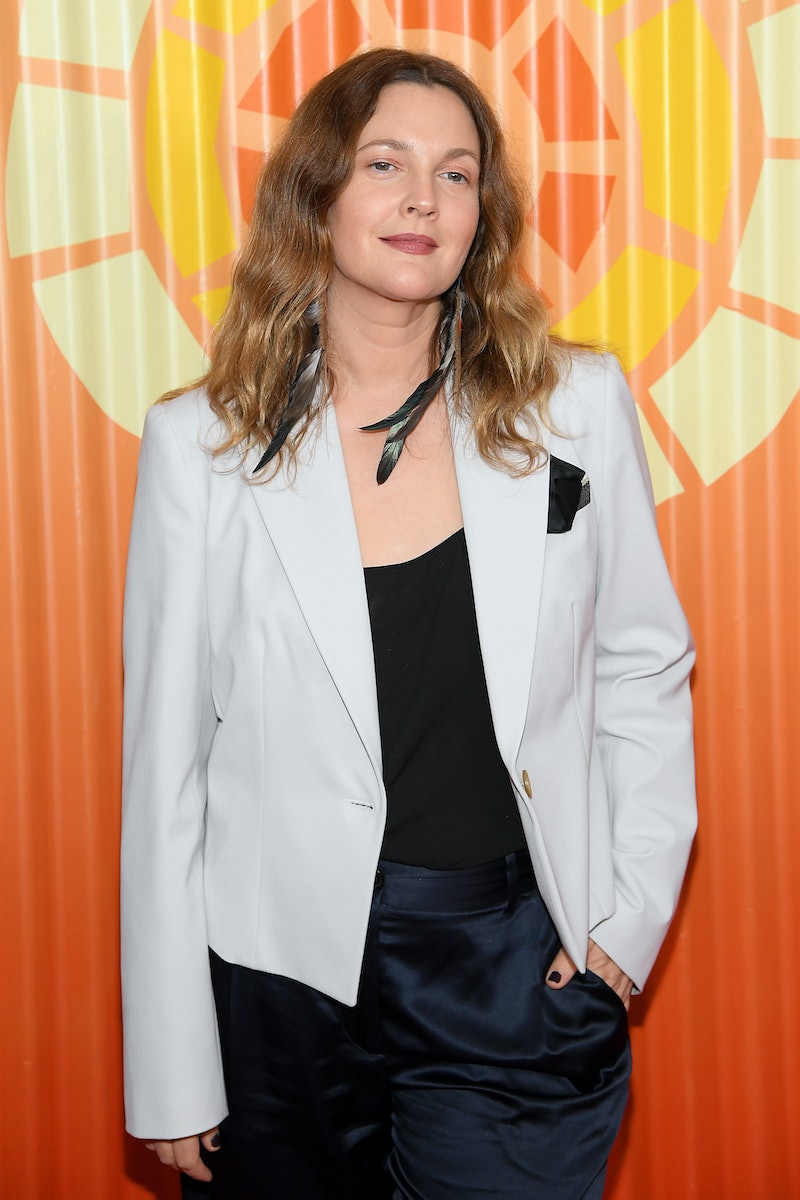 The world collectively got in touch with its romantic side when Bridgerton debuted on Netflix last December. It was to be expected after viewers watched the Duke of Hastings (Regé-Jean Page) and Daphne (Phoebe Dynevor) declare that they "burn" for one another before a series of steamy trysts. As it turns out, even celebrities aren't immune to the show's seductive powers. This week, Drew Barrymore credited Bridgerton with her return to dating during an interview on The Late Late Show with James Corden. But, according to the 46-year-old actress, it wasn't the passionate love scenes that ended her romantic dry spell.

"Of course I realized that I associated Bridgerton with getting on a dating app and then went and got on the bull horn about that here on our show," Barrymore told Corden from the set of her titular talk show. "And then I was like, 'People are going to think it's the tawdry sex that got me all hopped up and back on a dating app.' It wasn't that. It was this weird relenting to the fact that I'm probably not going to meet someone in some old-fashioned way." She continued, "I'm not really aggressively looking, but watching this old-fashioned show was weirdly this keyhole entry point for me to accept the modern world because I am so old-fashioned."

Barrymore also confessed her love for the Shondaland series on a January episode of her daytime show, where she interviewed Dynevor and Page about their onscreen chemistry.

It's been about five years since Barrymore finalized her divorce from art consultant Will Kopelman, 42, whom she married in June 2012. In that time, Barrymore has thought about which qualities she'll be swiping right for in a partner. "Funny, gotta be funny. I just wanna laugh. That's always been my big criteria," she explained. "I love humor. It's my survival guide, and I can't get rid of my sense of humor. I laugh at everything. So funny is my favorite quality in any person."

Barrymore also opened up about co-parenting her two daughters (8-year-old Olive and 6-year-old Frankie) with Kopelman while on The Howard Stern Show this week. As for her ex, she even offered supportive words about Kopelman's new fiancée, Vogue director of fashion development Alexandra Michler, 33. "I'm happy to say he just got engaged to this wonderful woman named Allie who I am probably president of her fan club," Barrymore said. "The #NoEvilStepmother is the greatest blessing I could have hoped for. She is just so wonderful. I want him to be happy."

Here's to Barrymore's dating discoveries and the second season of Bridgerton, which may be enough to end my own war with the dating apps.

More like this
Kevin Kreider Finally Asked Out Kim Lee On 'Bling Empire'
By Brad Witter
Kelly Mi Li Teased A Mysterious New Boyfriend In 'Bling Empire' Season 3
By Brad Witter
‘The Ultimatum: Queer Love’ Is Officially On The Way
By Radhika Menon and Kadin Burnett
Here’s When You Can Expect More ‘Indian Matchmaking’
By Brad Witter
Get Even More From Bustle — Sign Up For The Newsletter