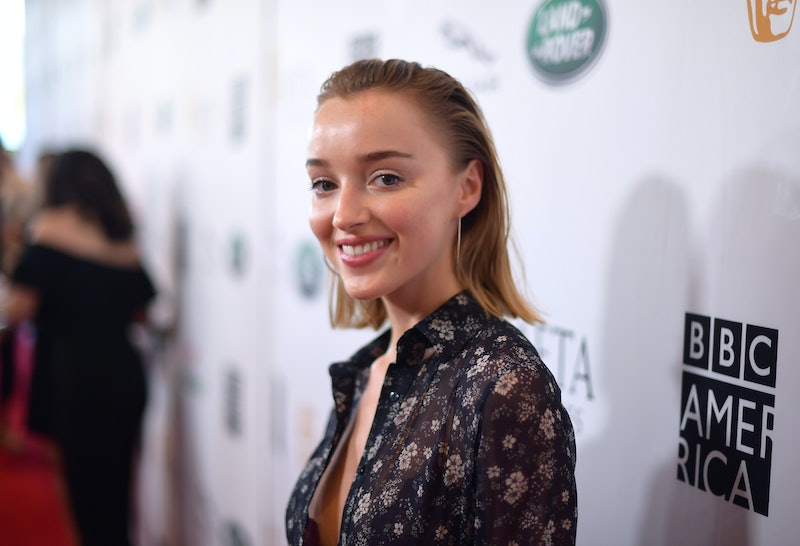 Now that Daphne and Simon are living happily ever after on Bridgerton, fans are more invested in seeing them together offscreen thanks to their enormous chemistry. Phoebe Dynevor addressed the Regé-Jean Page dating rumors in a new interview with British magazine You, published on Monday, Feb. 15. Sadly, the Bridgerton star confirmed that she isn't dating her onscreen lover in real life — even though it almost seems like she wants to.

"I’d love to say there was really something between us," she said. "But no, it has always been strictly professional." However, she understands why fans really want to see them together in real life and hates ruining the illusion. "People really root for us," she remarked. "We have to say we’re actors, we’re doing a job. There is something to be said for not spoiling the magic… but at a certain point you have to say no."

Despite inevitable disappointment from fans, Dynevor came to be grateful for the fact that she and Page kept things platonic. "There was so much pressure on us to get it right that it was all about the work," she explained. "We have a really professional working relationship. I’m glad for that, actually. It would be very complicated if it went further." However, she seems open to the possibility of life imitating art in the future. "I always hear about people falling in love with their co-stars," she said. "It’s yet to happen to me, but I’m intrigued."

In January, during a joint interview with Dynevor on Access, Page dismissed the dating rumors without directly denying them, attributing their chemistry to the "beautiful scripts" that were written for them. "I think everything you need to know is on camera," he said. "That's why we presented it so beautifully for you... I think that the sparky scripted material are more than enough." However, he wasn't above playing into the rumors for laughs, joking that he and his co-star were "playing footsie under here" — despite being at different locations.

Viewers started speculating about the onscreen couple right after Bridgerton's Dec. 25 premiere. The Shonda Rhimes-produced series garnered over 82 million viewers in its first month, quickly becoming Netflix's biggest original series ever and all but guaranteeing that fans would be shipping Page and Dynevor in real life. While that romance hasn't happened (yet), the co-stars will likely return for Season 2 as Daphne's brother Anthony Bridgerton searches for his own true love.

More like this
‘The Ultimatum: Queer Love’ Is Officially On The Way
By Radhika Menon and Kadin Burnett
Here’s When You Can Expect More ‘Indian Matchmaking’
By Brad Witter
Rhys Ifans Has A Good Reason For Keeping His Love Life On The DL
By Maxine Harrison
Devi Is Going To Meet A “Smoldering Bad Boy” In ‘Never Have I Ever’ Season 4
By Jack Irvin and Gabrielle Bondi
Get Even More From Bustle — Sign Up For The Newsletter