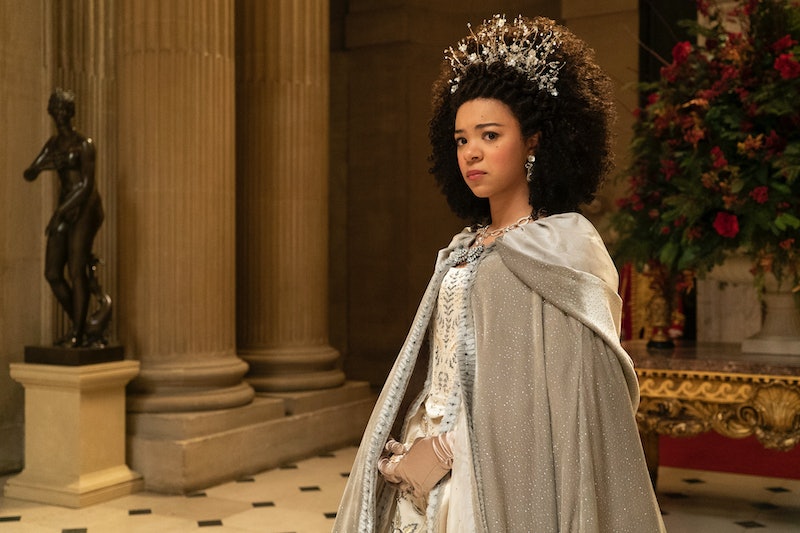 She reigns supreme on the Netflix series, and now Queen Charlotte will be the subject of a Bridgerton spinoff. Last year, Netflix announced an upcoming prequel that will delve into the royal’s origin story and feature some familiar characters like Lady Danbury and Violet Bridgerton.

The spinoff idea, executive producer Shonda Rhimes shared, came from Netflix’s co-CEO Ted Sarandos. “Ted picked up the phone and called me and said, ‘Why aren’t we doing a show about Queen Charlotte? And will you write it?’” she told Variety. She said yes immediately: “I’m very obsessed with Queen Charlotte, and I always call her the Beyoncé of the show.”

Rather than taking a page from Julia Quinn’s bestselling novels, Bridgerton’s writers made the creative choice to add a dramatized version of the real-life monarch (played by Golda Rosheuvel) to the TV adaptation. As such, there’s no fictional source material for the prequel. However, Rhimes, who’s writing and executive producing the yet-untitled series, will have the possibly first Black British monarch’s history to draw from.

“Many viewers had never known the story of Queen Charlotte before Bridgerton brought her to the world, and I’m thrilled this new series will further expand her story and the world of Bridgerton,” Bela Bajaria, Netflix’s head of global TV, said in a statement to Variety. “Shonda and her team are thoughtfully building out the Bridgerton universe so they can keep delivering for the fans with the same quality and style they love.”

Despite not including Queen Charlotte in her books, Quinn told Oprah Daily that she wrote Rosheuvel a “fan letter” after seeing her performance in the Netflix adaptation. “I go back and forth between wishing I had actually written her in the books and then being glad I didn’t, because I don't know if I could have done as good a job,” she said.

On Sept. 23, Netflix dropped lots of new details for the Bridgerton spinoff — including its official title, which is Queen Charlotte: A Bridgerton Story. Here’s everything to know so far.

When Will Queen Charlotte Premiere?

The Bridgerton spinoff doesn’t have a release date, but fans of the Regency period drama have plenty more content to look forward to soon — including the much-anticipated Bridgerton Season 3, and at least one more entry on the way. “By planning and prepping all the upcoming seasons now, we also hope to keep up a pace that will keep even the most insatiable viewers totally fulfilled,” Bajaria added in her statement.

Jess Brownell, who previously worked on Shondaland shows like Grey’s Anatomy, Scandal, and Private Practice, will take over for showrunner Chris Van Dusen on Bridgerton’s third and fourth seasons. “As we continue to expand the world of Bridgerton, we now have the opportunity to devote even more of the Shondaland fold to the Bridgerton-verse,” Rhimes said in a statement, via Variety. “We’ve worked with Jess Brownell for over a decade and have long wanted to find the right project to place in her hands. When it came time to pass the baton, I knew this unique voice was vital to the future of the show.”

Who Will Star In The Spinoff?

In a February 2022 interview with Tatler, Rosheuvel shared her response when Rhimes called her last year about the spinoff prequel. The actor told Rhimes, “This is a real moment in terms of older women. From Mamma Bridgerton, who is a strong single mother, to Lady Danbury and myself, to be celebrated in this way is just phenomenal. Our job is done.”

In addition to Rosheuvel putting on the queen’s crown again, Adjoa Andoh and Ruth Gemmell will also reprise their roles as Lady Danbury and Lady Violet Bridgerton, respectively. India Amarteifio will play the younger version of Queen Charlotte who “learns to navigate the palace, the ‘ton and her unpredictable husband, as she grows into one of Europe’s most unforgettable monarchs,” according to a press release from Netflix. Corey Mylchreest is set to play King George, the Queen’s husband who must come to terms with his own demons after marriage.

The show will also give fans a look into Lady Danbury’s younger days as newcomer Arsema Thomas takes on the role of Queen Charlotte’s right-hand woman and “guiding light.” Game of Thrones’ Michelle Fairley will also star as Princess Augusta of the Dowager house, who is determined to keep her family relevant in an ever-changing Britain.

When the series was announced, fans took to Twitter to cast their own version of Violet’s husband, Edmund Bridgerton, with actor Ben Barnes as the most popular suggestion. However, at this time, Netflix has not announced any actors for a young Violet or Edmund.

Is There A Queen Charlotte Trailer?

There isn’t a trailer yet — but as part of Netflix’s Tudum event, the streamer dropped a first-look photo and what Rhimes called “very, extremely early” footage from the upcoming series. The clip features Amarteifio and Mylchreest before their love story has quite begun; it’s their meet cute. The two cross paths inside the palace’s garden, where Charlotte is trying to scale the wall and escape. That creates a conundrum for the man who finds her, seeing as he’s her husband-to-be and seems more than a little intrigued by her. Their interaction quickly establishes that their journey will be a captivating one to watch, even though Bridgerton already makes it clear that yes, they’ll get married.

What Will The Plot Be?

“Centered on Queen Charlotte’s rise to prominence and power, this Bridgerton-verse prequel tells the story of how the young Queen’s marriage to King George sparked both a great love story and a societal shift,” reads the new official Netflix logline.

Bridgerton’s second season, which follows the love life of a different Bridgerton sibling, dives deeper into Queen Charlotte’s personal life. And it might just help set up her story for the prequel. Of her character’s arc in the following season, Rosheuvel told Tatler, “I’m pleased they keep pushing the journey of her private life, so it’s not just about the glamour of the balls but also a deep delve into her heart.” It could mean that the show will tackle more of her relationship with her husband, King George III, as well as caring for him while he lives with mental health issues. Adding that Charlotte is “so fun to play,” she said she loves that the “complex character” is “mischievous, dedicated to the Crown, dedicated to the gossip and the pomp and ceremony.”

As Bajaria said, Rhimes and her team are coming up with the plot for the prequel themselves, given that the Queen Charlotte origin story wasn’t part of Quinn’s literary canon. They could, however, draw on the very real historical figure of the same name. She, too, was married to a King George III who lived with mental health issues. The real-life couple was reportedly very in love and fertile — they had 15 children. The real king apparently also pioneered debutante balls to celebrate his wife’s birthday. If the show is inspired by history, maybe fans will witness Queen Charlotte’s very own true-to-life whirlwind romance.

Quinn did also write an entire prequel series — the separate 1700s-set books devoted to the aristocratic Rokesby family, who the author noted happen to be close friends and neighbors of the Bridgertons — so readers may continue to see tie-ins.

In a May 2022 interview with TVLine, both Andoh and Rosheuvel revealed some of the show’s first plot details, explaining how Queen Charlotte’s friendships will shape the Bridgerton spinoff. Andoh also teased that Lady Danbury’s strategic approach to life will also be explored in the prequel.

“You need to strategize ... These courts are not cuddly, friendly places. They’re rabid, and you have to survive. Lady Danbury has gotten to a position of comfort and safety and status because she learned to play the game, and you will see how,” Andoh said.

Whatever else the future might hold for the Netflix Bridgerton universe, it doesn’t seem to be going anywhere anytime soon.

This post will be updated with the trailer, release date, and additional plot details as more information on Queen Charlotte: A Bridgerton Story becomes available.

More like this
This Tiny Clue In 'Wednesday' Foreshadowed That Season Finale Twist
By Grace Wehniainen
Jenna Ortega Wanted To Redo The 'Wednesday' Dance Scene For A Controversial Reason
By Grace Wehniainen
The ‘Emily In Paris’ Season 3 Trailer Teases Major Career & Love Crossroads For Emily
By Bustle Staff
The First Trailer For 'That '90s Show' Includes So Many Nods To The Original Series
By Jack Irvin, Alyssa Lapid and Grace Wehniainen
Get Even More From Bustle — Sign Up For The Newsletter

This article was originally published on May 15, 2021