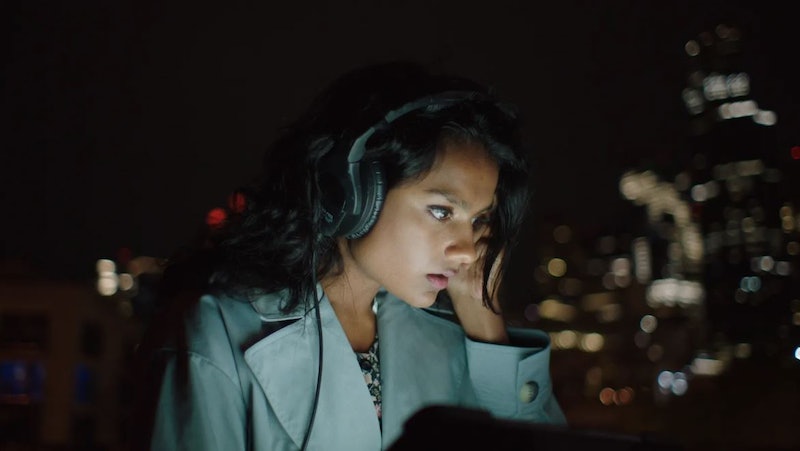 Simone Ashley’s follow-up to her star-making performance as Kate Sharma in Bridgerton Season 2 is in an unlikely place: an ODESZA music video.

In the music video for the electronic duo’s song “Love Letter,” the third single from their latest album The Last Goodbye, Ashley stars front-and-center as an amateur dancer named Iyla Chhaya who reinvents herself time and again after receiving a series of rejection letters to dance academies around the world. The words “unsuccessful,” “we regret to inform you,” and “nope” flash on the screen against the song’s chorus: “You can’t break my heart / ‘Cause I was never in love.” Clutching each heartbreaking letter, Iyla dances it out in empty apartment rooms, on the rooftop amidst a glowing sunset, and on stage in a poorly reviewed one-woman show.

Cobra Kai’s Yuji Okumoto stars alongside Ashley as her character’s teacher and guiding light through the disappointments, as she embraces her inner Karate Kid. The official press release describes Iyla’s journey as a “series of tribulations, and ultimately, triumphs” with the goal of creating an experience that is “visually arresting, moving and inspiring.”

ODESZA praised the collaboration with Ashley saying, “Working with Simone on this project was such an honor. She’s such a talented artist in her medium, and this was unlike anything we’d done before respective to our music videos.” The electronic duo also commented on their ongoing partnership with director Dan Brown who was the mastermind behind the video’s concept. “The director, Dan Brown...wrote such a compelling treatment, and seeing her bring it to life in full was pretty surreal. It was such a cool way to reinterpret the song visually. We hope fans enjoy it as much as we did in making it.”

The artists are calling the music video a “cinematic short film” and approached their previous collaborator Dan Brown (who has directed their videos for “It’s Only” and “Line Of Sight”) to bring this song to life. Clay Knight, one half of ODESZA, previously noted that the duo was “really blown away” by Brown’s work for their song “It’s Only,” which has led to a long-term partnership between the two parties. Brown also praised the experience of working with ODESZA saying, “They are great collaborators. They have strong ideas and really get behind the ideas they like, so they’re great to have on your side. It’s always better to have that level of passion on the other end.”

The song also features The Knocks, another American electronic duo known for their remixes who have collaborated with artists like Billie Eilish, Finneas, and Foster the People.

ODESZA was formed in 2012 by Western Washington University classmates Harrison Mills and Clayton Knight, and have received two Grammy Award nominations to date. Their new album, which released in July 2022, was met with rave reviews from fans and critics alike. Billboard described the album as “full of lush soundscapes, grandiose moments and productions that are equally complex and emotive,” and Pitchfork proclaimed, “Knight and Mills have found themselves at their most introspective just as they’re primed to make a bigger splash on the stage than ever before.”

Ashley’s breakout in Season 2 of Bridgerton poised her as the hottest new actress on the scene, and with her nonverbal but emotive performance in “Love Letter,” she’s proving that she can do just about anything.

More like this
Everything To Know About Taylor Swift’s 10th Studio Album, 'Midnights'
By Grace Wehniainen and Jake Viswanath
Twitter Is Freaking Out Over Rihanna’s 2023 Super Bowl Halftime Show Announcement
By Stephanie Topacio Long
Kanye West Apologizes To Kim K "For Any Stress I Have Caused" In Rare Interview
By Jake Viswanath
'School Of Rock' Changed Joe Keery's Life Forever
By Alyssa Lapid
Get Even More From Bustle — Sign Up For The Newsletter