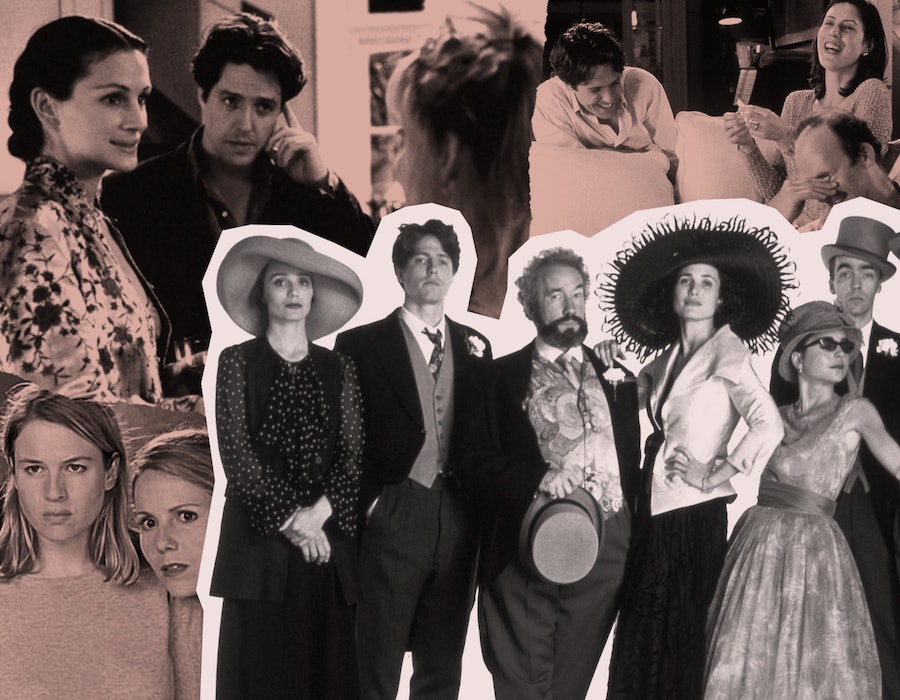 All I want in life is a big British group of friends. Do you know the type I’m talking about? I mean Richard Curtis friends. A group of friends who meet for weekly dinner parties to discuss our past relationships and make fun of each other’s bad cooking. A group which is always present and fully formed at every destination wedding.

If you’ve seen Notting Hill, Four Weddings and a Funeral, or Bridget Jones’s Diary, you know what I’m talking about. The Big British Friend Group is always mixed gender, usually with one established couple thrown in, and possibly one pair of siblings. The core of the group met at university (“uni”, naturally), and there may or may not be one wild card. Two members of the group might have feelings for one another, or there might be a single lingering, one-way crush. I am absolutely desperate for a Richard Curtis friend group, and I might start taking applications.

I’ve come to realize over the past few weeks that the Big British Friend Group doesn’t quite have an American analogue. Sure, there are American movies where there are groups of friends—The Big Chill, The Best Man — but in those films, the friendship is the very point of the movie itself. In a Big British Friend Group, the group is incidental to the plot: Hugh Grant meeting and falling in love with a movie star is made all the richer because he just so happens to have half-a-dozen close personal friends with fully-fleshed-out, realized inner lives and personalities.

I wonder if we Americans have taken a far too “boys are from mars,” approach to our friendships, especially on screen.

Same with Bridget Jones — the friend group exists in the background, but they’re essential to the fabric of the movie’s tone. I fear in an American version of that movie, Bridget would have been given a single female friend, one Judy Greer type who existed only for exposition, who was given one quirky character trait to trick audiences into thinking she’s well-rounded.

Are friend groups more co-ed in England on average? I wonder if we Americans have taken a far too “boys are from mars,” approach to our friendships, especially on screen, where The Girls get their nails done and go to brunch, and The Boys hang out to watch football games, play poker, and go to strip clubs? I guess? I wonder if the notion that men and women can’t be friends with each other without sex getting in the way is a fundamentally American notion (ironically, When Harry Met Sally features one of the most well-rounded friend groups in American cinema after Marie and Jesse get together.)

Let me assure you, I have friends. Seriously, this column isn’t a cry for help except the normal way that all writing for the internet is. But I think at some point in my adulthood, I realized friendships take work, and individual effort. I’ve lived in three different cities since leaving home at 18 and I’ve been lucky to meet people along the way I’ve connected with as individuals. But maybe because of distance, or because of personality types, or busy jobs, we’ve never fused into the one giant friend group that my rom-com-loving brain assumed all adults naturally fall into.

Let British Friend Groups be one of the many things we import from across the Atlantic.

When I graduated college, I took a trip to London and went on a Tinder date that quickly turned platonic, but turned into me hanging out with the boy the next day for a tour of London. “Hold on,” he said at one point, “Let me text the Gang and see if they want to meet up.” Readers, he texted a group chat called THE GANG, and within the hour, Jono, Claire, and Cameron had appeared outside the Tate modern to spend the rest of the day sharing a pitcher of Pimms and browsing vintage cookbooks at the Southbank Book Market. The whole time I was thinking, “I can’t believe the Richard Curtis friend group has been real this entire time.”

But unfortunately for me, Rory, Claire and the gang live in London and even though I’ll bribe them with girl scout cookies and Olive Garden to make the flight to the United States for my wedding, in the meantime, I’m still woefully under-British-friended.

With Fall coming up, I’m desperate to sink into the coziness of a group of friends who have known each other for eternity and love each other as a foregone conclusion. My cozy autumn movies are giving me friendship FOMO. Let British Friend Groups be one of the many things we import from across the Atlantic, right after universal healthcare, and toilet stalls without awkward door gaps. In the meantime, I’ll just be binging Lovesick for the 6th time.

More like this
'Abbott Elementary' Fans Probably Missed This 'Parent Trap' Easter Egg
By Sam Ramsden
Sandra Bullock’s Razzies Speech Proves She’s The Ultimate Miss Congeniality
By Sam Ramsden
Anne Hathaway Shared A "Thrilling" 'Princess Diaries 3' Update
By Darshita Goyal
At 28, Rosie Perez Risked Her Career To Stop Playing Stereotypes
By Gabrielle Bondi
Get Even More From Bustle — Sign Up For The Newsletter
From hair trends to relationship advice, our daily newsletter has everything you need to sound like a person who’s on TikTok, even if you aren’t.