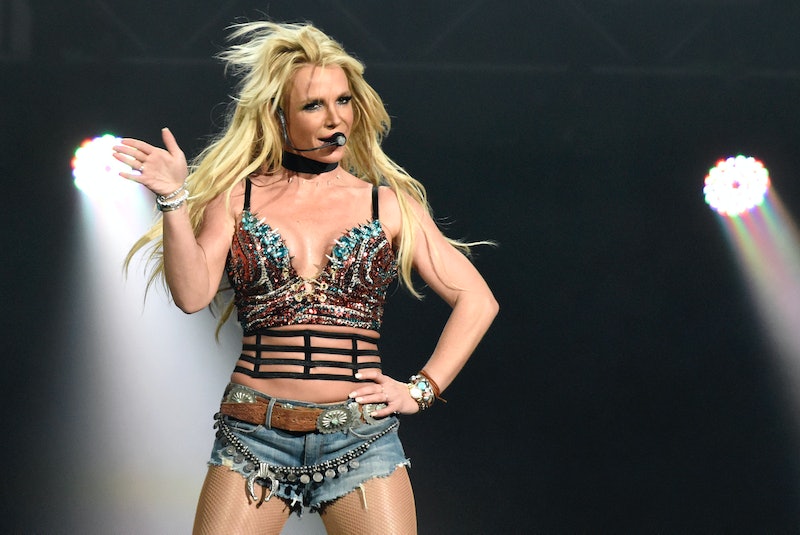 Britney Spears is currently trying to remove her father from her controversial conservatorship, but he's now fighting back. Jamie Spears' lawyer spoke out in defense of him during a Feb. 25 interview on Good Morning America, claiming that he "saved Britney's life" and fills his court-appointed role "because he loves her." Jamie has acted as Spears' conservator since 2008, but the singer's lawyers have told courts that she won't perform again until he's no longer the conservator over her person and estate.

"I understand that every story needs a villain," Vivian L. Thoreen said on GMA. "But people have it so wrong here."

Thoreen argued that when Jamie stepped in as his daughter's conservator, her finances were only valued at $2.8 million. Under his watch, Spears' estate has reportedly grown back to be worth over $60 million as of 2019. "This is a story about a fiercely loving, dedicated and loyal father who rescued his daughter from a life-threatening situation," Thoreen argued. "Britney's assets were clearly being mismanaged and she was being taken advantage of financially by some of those around her."

Attorneys for Spears and her mother, Lynne, have repeatedly asked Jamie to step down as her conservator, saying it was in the singer's best interest. "My client has informed me that she is afraid of her father," Spears' lawyer Samuel D. Ingham III said in a September court hearing. Spears has requested her longtime “care manager” Jodi Montgomery be permanently instated as her conservator, and asked that a “qualified corporate fiduciary" take control of her estate. However, Jamie remains the co-conservator of her estate alongside Bessemer Trust.

When the interviewer brought up Spears' lawyer's claim that she was "scared" of Jamie and asked why Ingham would say that, Thoreen skirted the question without giving a specific reason. "Jamie loves his daughter and like any other family, issues come up from time to time, but this in no way takes away from the love and support that they have for each other," she explained. "Britney knows that her daddy loves her and she knows that she can call on him anytime, conservatorship or not." Her answer was similar when asked why Jamie refused to step down: "Jamie serves as Britney's conservator because he loves her."

In fact, Thoreen claims that the Spears has "many conversations" with her father and spent quality time with him as recently as last year, when she spent the first two weeks of the COVID-19 pandemic in her home state of Louisiana. "Britney and Jamie went on long drives together," she said. "They played and worked in the family garden and every night, Jamie cooked Southern comfort food that the family ate and enjoyed together. In that time Britney never expressed those words to her father. She's never asked him to step aside."

This statement contrasts reports from People that Spears is "not speaking" to Jamie after her ex-husband Kevin Federline filed a police report accusing him of physically attacking his and Spears' son Sean Preston. After the alleged incident, Jamie stepped down as her primary conservator and was temporarily replaced by Montgomery.

Thoreen appears in the New York Times documentary Framing Britney Spears, which has caused renewed public interest in Spears' current situation and longtime battle with the media. The lawyer, who specializes in estate and conservatorship matters, stopped representing Jamie before the doc and originally appeared as a neutral party to explain the conservatorship case. However, the doc revealed that "shortly after filming this interview, Thoreen rejoined the conservatorship legal team representing Jamie Spears."

More like this
Britney Spears Shares Unknown Details Of Conservatorship In New Voice Notes
By El Hunt
Everything To Know About Taylor Swift’s 10th Studio Album, 'Midnights'
By Grace Wehniainen and Jake Viswanath
Twitter Is Freaking Out Over Rihanna’s 2023 Super Bowl Halftime Show Announcement
By Stephanie Topacio Long
What Demi Lovato Really Thinks About Child Stardom, Depression, & Sobriety
By Radhika Menon
Get Even More From Bustle — Sign Up For The Newsletter