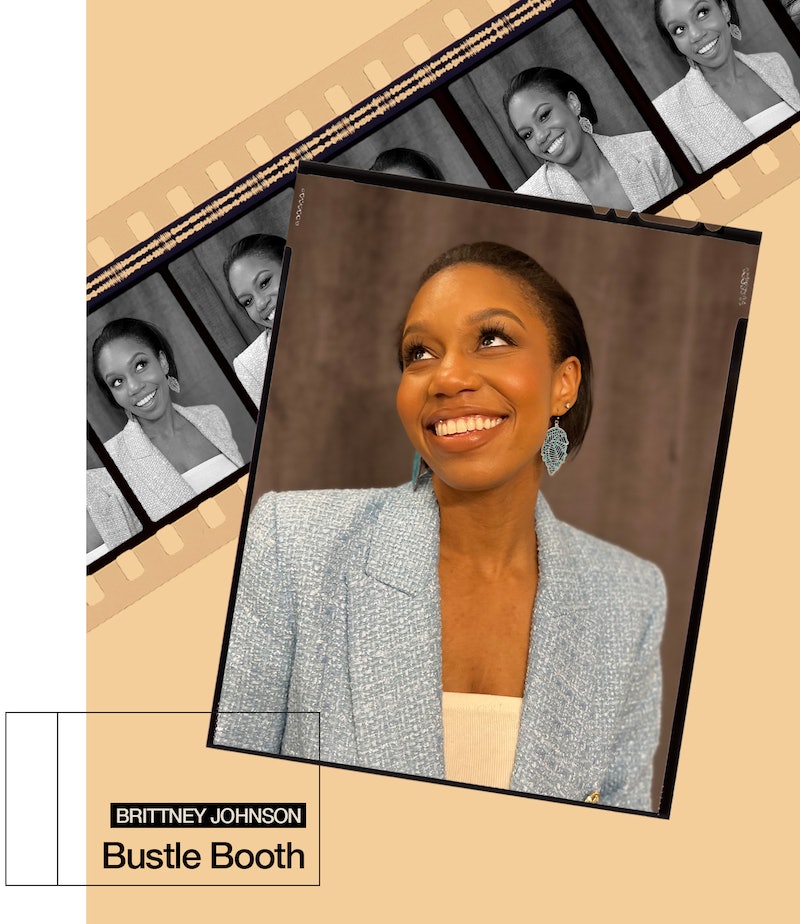 It was the day before Brittney Johnson’s big entrance as Wicked’s new Glinda, when she would become the first Black woman to perform the role full time on Broadway. Her family traveled in from Washington, D.C., for opening night to celebrate Johnson’s return to the stage after a nearly two-year hiatus due to COVID-19 shutdowns. And finally, reality hit. “I was like, [gasp] ‘I’m playing Glinda tomorrow! It’s happening!’”

Having run for 19 years at the Gershwin Theatre, Wicked — an adaptation of Gregory Maguire’s same-named novel about Oz’s ruling witches — is one of Broadway’s longest-running shows, making Glinda the Good Witch one of musical theater’s most iconic characters. “[But] it doesn’t feel like putting on a coat that someone has worn before,” Johnson tells Bustle. She assumed the torch last month — or better yet, the Swarovski-adorned magic wand — from a long line of 17 previous Glindas, including Megan Hilty and Kristin Chenoweth, who originated the role in 2003.

When Johnson landed the part, Chenoweth sent her a necklace with the words “toss, toss” — a Glinda-ism that the character shares with Elphaba (aka, the Wicked Witch of the West) in the song “Popular.” But before Johnson could fully accept the appointment and float down from the rafters in Glinda’s Magic Bubble, she first had to break through the ceiling.

“There’s a reason why they call it breaking the glass ceiling,” says the 32-year-old, who joined Wicked in 2018 as a Glinda standby and understudy. “If you literally think about going through a glass ceiling, it hurts. It scratches you on the way through.”

Johnson made her Broadway debut in 2014 in Motown: The Musical, roughly two years after graduating from NYU’s Tisch School of Drama. She’s since racked up credits in Beautiful: The Carole King Musical, Sunset Boulevard, and Les Misérables, where she made history as the first Black woman to ever play the roles of Éponine and Fantine on Broadway, and as the only person to play both roles in the same day.

“It’s hard being the first,” says Johnson, who uses her platform to address racism in the theater community as a way to ensure her successors “[don’t] have to get scratched up as much.” But, she adds, “In lots of ways, I’m grateful that it’s me [breaking these racial barriers], because I know that I can take it and have taken it.”

Johnson’s favorite song in the show, “Thank Goodness,” epitomizes some of the conflicted feelings that come with being an embodiment of hope. Standing atop her podium as the newly appointed Good Witch of Oz, Glinda must maintain a sunny optimism upon which the Ozians now depend — despite the fact that her best friend, Elphaba, is Person of Interest No. 1. “I couldn’t be happier,” she sings as her subjects gaze up at her, “because happy is what happens when all your dreams come true. Isn’t it?”

“When people look to you as a representation of their dreams and what’s possible, you recognize the role you play in their life,” says Johnson. She often uses social media to show fans sides of herself the stage lights don’t capture, such as documenting a post-show bike ride home in the rain or tweeting about mental health. “I want to be that for people … but I also want to represent myself as a full human being that people can look up to, not just [as] their dream.”

Learn more about Johnson in the Bustle Booth questionnaire, below.

Johnson with singer Ariana Grande, who will play Glinda in an upcoming film adaptation.

I’m a Capricorn through and through!

That’s a tough one. It’s a three-way tie between Rugrats, The Powerpuff Girls, and SpongeBob.

What’s one musical or song you’re currently obsessed with?

I’m going to cheat and tell you an artist I’m obsessed with right now: JoJo. That voice! Wow!

I don’t know if I have an idol per se, but the artist who’s career and accomplishments I most admire is Audra McDonald. She has broken barriers and records, and has inspired me as an artist. She showed me my dreams were possible, because I saw and continue to see her achieving them.

“Don’t Stop Believin’”! I like to do audience participation when I do karaoke!

The bravery and tenacity of young people to stand in their truth and stand up for what they believe in. It’s truly admirable.

More like this
Jillian Mercado On Representation In The Metaverse
By Erin Stovall
Meet The Rugby World Cup Breakout Star Making The Sport More Inclusive
By Shahed Ezaydi
In Pop Culture, Female Journalists Are Finally The Main Character
By Jenny Singer
The Britney Spears Disney Princess Musical Is Finally Opening On Broadway
By Jake Viswanath
Get Even More From Bustle — Sign Up For The Newsletter