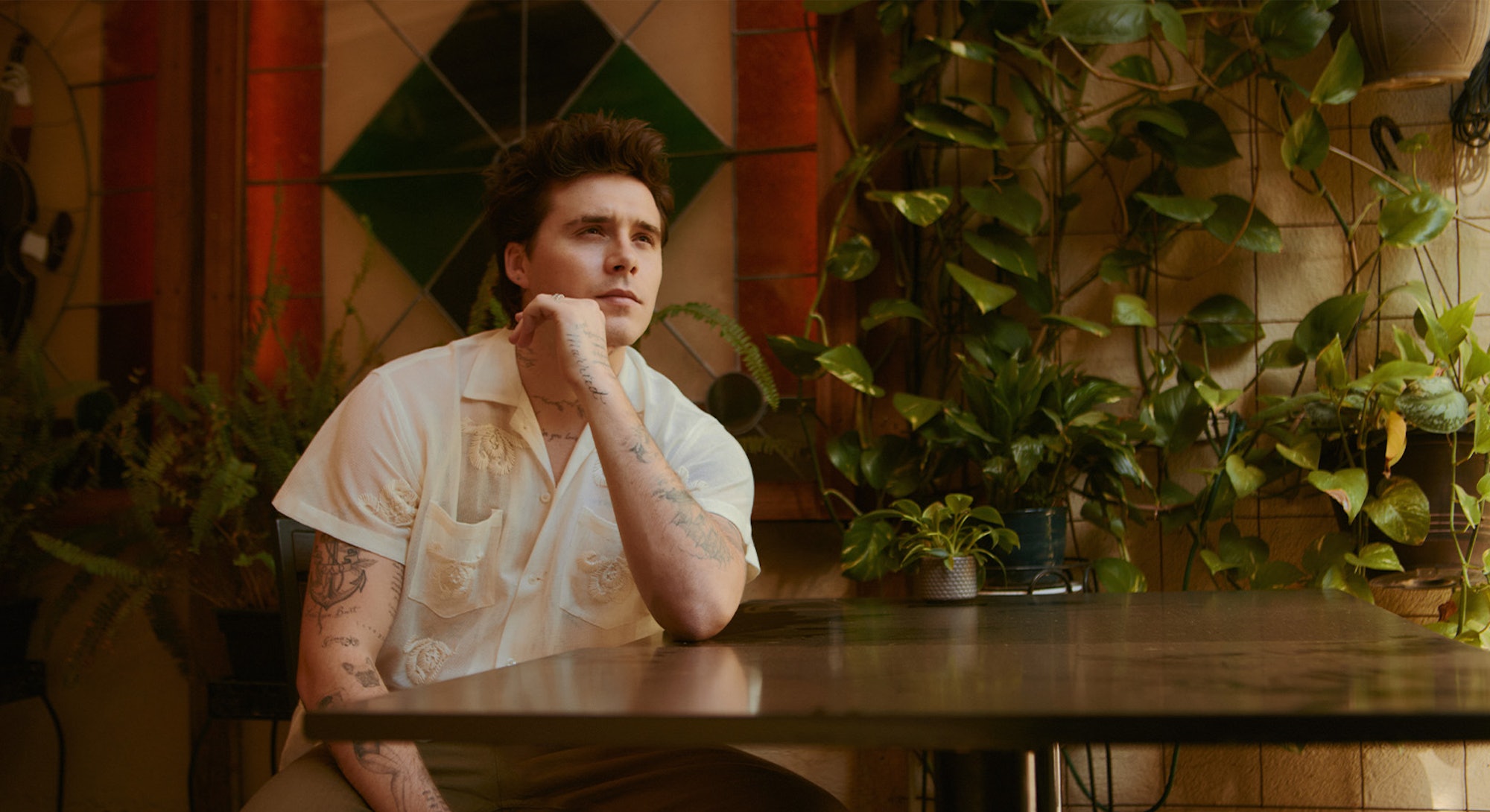 It’s lunchtime at The Cat and Fiddle, the rare English pub in Los Angeles, and Brooklyn Beckham is sipping a dark pint of Guinness. Like all Brits living abroad, he is somehow obligated to explain how much better this beer tastes back in Ireland. He offers a winding riff about the texture, and how it changes when it travels across the ocean, before eventually landing the proverbial plane. When it comes to a stout, he says, “The foam is the most important.”

Brooklyn is the eldest son of Victoria and David Beckham and, at 23 years old, a celebrity in his own right. Though what he’s famous for is a bit of a mystery (more on that soon). Still, he has more than 14 million Instagram followers and his April wedding to the actress Nicola Peltz made the digital cover of British Vogue. His is the kind of fame that allows one to turn a love of home-cooking into an eight-episode series for Facebook Messenger called—what else—Cookin’ With Brooklyn, which featured a murderer’s row of guest chefs including Nobu Matsuhisa, Mozza’s Nancy Silverton and the Korean-American star Roy Choi, some of them personal friends.

Cookin’ With Brooklyn made excellent use of his greatest strength—genuine curiosity—which made the backlash to the program even more bizarre. The New York Post took issue with the show’s cost (reportedly $100,000 an episode) and, referring to a rumored line of Brooklyn Beckham-branded hot sauces, dubbed him “Nepotism Spice.” A UK TV host, meanwhile, slammed his promotional appearance on James Corden’s show, implying he’d somehow taken a slot from a more-deserving young chef.

“I’m not a professional chef—at all,” Brooklyn tells me over lunch, his hair exceedingly tall. “I’ve never said that. I never would say that. Obviously, my dad knew what he was doing at a very young age. I’ve only been doing cooking for not even three years.” Brooklyn is, he suggests, a work in progress. The problem is he’s figuring it all out in real time—with the whole world watching. “It’s OK to be 25, 26 or even 30 and not know what you’re doing yet. You know what I mean?”

That anyone is criticizing Brooklyn Beckham for what amounts to a web series is itself notable. Shouldn’t the handsome, 23-year-old son of David and Victoria Beckham be getting into more trouble? Or at least more interesting trouble? Shouldn’t he be dancing on tables in St. Moritz or romancing a minor European royal? Instead, he’s a stay-at-home dad to three rescue dogs. The best the tabloids can drum up is a rumored feud between Brooklyn’s wife and his mother—a feud Brooklyn denies today.

“People love to write stuff, always love to write rubbish,” he says. “And they write it because it goes everywhere and everyone talks about it.” Uh, OK. So Victoria and Nicola are fine? “Yes.” And Nicola isn’t demanding you stay in Los Angeles for Christmas to punish her mother-in-law, which I definitely read somewhere? “No, no!” he says, laughing. “They always write rubbish.”

It’s hard for Americans to understand just how famous his parents are back home, but they are Brad-and-Angelina famous, their every move breathlessly chronicled by the press. Brooklyn’s father is, of course, a champion footballer (who memorably modeled underwear for Armani), his mother a one-time Spice Girl turned fashion designer who, after more than a decade in business, recently showed during Paris Fashion Week for the first time.

And Brooklyn, it seems, has been searching for his own passion from the jump. As a teenager, he’d briefly played football for Arsenal’s academy—which feeds into its pro team—in the same position his father played. But Brooklyn’s sporting career ended at 15. As he explains, “I have a lot of anxiety. And to try and live up to what my dad did, it was just like, it got to the point where I was just, like, I really just want to make my own name for myself and work my arse off.” He takes a breath, adding: “I’m a Pisces. Sensitive.”

Then he tried his hand at fashion photography, shooting a Burberry fragrance campaign at 16—a lucky break that was immediately met with shouts of nepotism. (Fashion photographer Jon Gorrigan went so far as to call it “a bit of injustice.”) Still, a coffee table book of Brooklyn’s work was published by Rizzoli in 2017. But after enrolling at Parsons School of Design to study photography, he dropped out after a year.

The press painted him as somehow ungrateful for these opportunities, though he says now that he simply didn’t love photography enough to make it his life. What’s more revealing about Brooklyn is what he remembers most about that time in New York. He’d lived in an “old person’s building” on East 21st Street, he proudly tells me—a no-man’s land in Manhattan—where he’d sometimes drop off food he cooked for his elderly neighbors. “I’m an old soul,” he says, with a shrug.

What’s a kid to do? At 23 he’s found the role he’s been searching for. I swear this isn’t meant to be a read, and I think he’d agree. But allow me to introduce Brooklyn Peltz Beckham, Professional Wife Guy. Beckham had actually never heard the term “wife guy,” which means, essentially, someone whose whole Internet presence is a tribute to their better half. But he admits that’s basically him. “Definitely, definitely,” he says. “I mean this is definitely a woman’s world. And guys are just living in it. The girls are in charge.”

Brooklyn had his first date with Nicola Peltz in the fall of 2019 though he says he’d known her for much longer. “I was friends with two of her brothers. Really good friends. And actually, my wife didn’t like me at first.” Why not? “People in L.A. talk,” he replies. “This is why I feel like—I don’t know if we’re always going to live here. But our work is here. But people in L.A. talk. I mean, talk rubbish and stuff.”

“Yeah, I mean— But we never really hung out before then. And I was always shy. When I did see her, I was always shy because I thought she was so gorgeous and so nice. And then, just before the pandemic, I took her on a date right around Halloween. It was either on Halloween night or the day after. And we just really got along. Yeah, been inseparable since.”

The two went public with their relationship in January of 2020—right before, well, ya know. Brooklyn and Nicola spent the early part of the pandemic shacked up with her parents in Palm Beach. It’s not like they were in tight quarters. Her father is billionaire investor Nelson Peltz (who, among other things, has a large stake in Wendy’s), her mother a model, Claudia Heffner. But it was seriously domestic, with Brooklyn sometimes cooking meals for the family. When he proposed marriage after just six months together, he tells me, Nicola asked him: “What took you so long?” He is now professionally and personally known as Brooklyn Peltz Beckham.

“I think it’s so obvious to know when you've met the right person,” he tells me. “I think—especially through quarantine—we didn't get on each other’s nerves.”

When Nicola was filming the Hulu series Welcome to Chippendales earlier this year, he often drove her to and from work—sometimes “at three, four in the morning for like a five a.m. call time,” Brooklyn says. (Nicola grew up largely in New York and doesn’t drive.) He also walks the dogs every morning.

In that way, anyway, he is very much his father’s son. David Beckham may be the original Wife Guy. When he and Victoria first got together, they were memorably photographed in matching Gucci motorcycle jackets and leather pants (for a dinner hosted by Versace, no less). Victoria recently addressed the look on Watch What Happens Live, telling Andy Cohen: “There was a naiveté to it that was just so sweet.”

Likewise, Brooklyn wears his heart on his tattooed sleeve. Dr. Woo, the noted Los Angeles tattoo artist, inked the entirety of Brooklyn’s wedding vows on his right bicep in delicate, cursive lettering. The kid is so sincere—so clearly without guile—he’s like a rescue dog who finally found his furever home. And that safe space is wherever Nicola happens to be.

“I really just want to make my own name for myself and work my arse off.” He takes a breath, adding: “I’m a Pisces. Sensitive.”

“My parents had me at 23,” he says. “I’m 23 now. I’ve always wanted to get married young, I’ve always wanted to have kids young—to grow up with my kids when I’m still young.” Is some baby announcement imminent? “My wife is an actress. I think she needs a little bit more time. She wants to work a little bit more [first]. I always said, Whenever you’re ready, I’m ready.”

The newlyweds are currently living in his wife’s former bachelorette pad near Century City. Of the high-rise building, he says, “Security is a big thing. Everyone wants to feel safe. But I think next year we want to start looking for our own place, like a little house or something. Our personal space—it means the world to us.” According to the New York Post, the couple recently unloaded an $11 million home in Beverly Hills after owning it for less than a year. Maybe it was missing something? “My dream when we get a house,” he says, “is to have a very old-fashioned wine cellar.”

It was Nicola’s idea to turn Brooklyn’s cooking habit into a business; when the videos started to rack up likes, she suggested he turn it into a TV show. He shoots some of his videos at home, and he recently whipped up a fish-and-chips sandwich that looked so good, Nobu himself actually commented: “I want to eat too!”

Nobu, it turns out, is a friend. The 73-year-old chef also happens to be Brooklyn’s neighbor. And after running into each other one night at Matsuhisa—where Brooklyn explained he’d been working on perfecting his own sushi rice at home—Nobu dropped off a rice cooker for him. Nobu also appeared on Cookin’ With Brooklyn, teaching his young charge how to properly slice fish. Of Brooklyn, the iconic chef recently said: “He understands my heart, too, and he likes to learn more. He’s so appreciative.”

That disconnect—between how Brooklyn is seen by the public and how his friends see him—has perhaps inspired his next project. It’s still early in the process but next year, Brooklyn tells me, he’s shooting a new docuseries in which he’ll cook on the line in some established restaurants (kind of how Jeremy Allen White trained for The Bear). Presumably the fun will come from watching Brooklyn have his ass handed to him, which is maybe what the world wants to see.

Would Brooklyn ever open his own restaurant? Maybe a pub, he says, here in Los Angeles, in a few years. He’s thought about it quite a bit. “Have you been to a proper English pub?” he asks. “You know how there’s low ceilings? Everything’s dark, everything smells of old beer, sticky?” He wants it to feel like that. “But it’s more going to be focused on obviously the aesthetic, the food, and the beer. I want to get the beer imported from Ireland.”

Does he have a name for the pub? “Not yet, not yet,” he says. “It’s going to be something to do with my wife.”