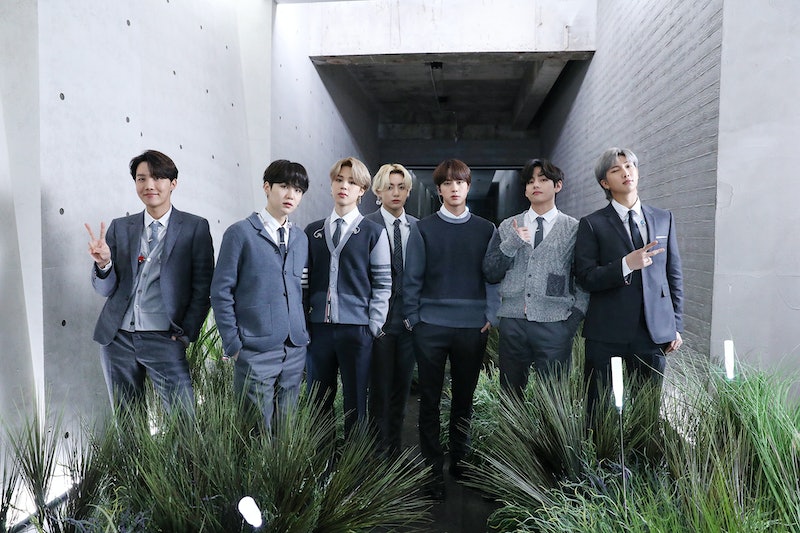 Who could be better suited to take on 2021's first installment of the iconic MTV Unplugged series than BTS? Months after the release of the group's ninth studio album — described by the members as a "letter of hope" to fans amid the ongoing pandemic — BTS delivered an extravagant performance on Feb. 23, complete with several locations, outfit changes, and a live band. Becoming the first Korean act ever to take on MTV Unplugged, RM, Jin, Suga, J-Hope, Jimin, V, and Jungkook performed stripped renditions of four songs from Be as well as a surprise cover of Coldplay's 2005 hit "Fix You" — and they dedicated it all to their fans, the ever-so-dedicated ARMY.

BTS opened the set with the first-ever live performance of "Telepathy" off Be, donning casual attire and appearing in a gaming room filled with arcade games, a foosball table, dart boards, throwback consoles, and more. The track was written by Suga, who detailed the inspiration behind it. “We’re in a situation where we can’t meet our fans around the world in person due to COVID-19," he said. "So the song’s lyrics describe our current situation of temporarily being apart from each other.”

Next, the group took to a sunlit, greenery-filled space to debut Be's self-reflective ballad "Blue & Grey," switching to dapper gray suits for the occasion. Member V, one of the song's co-writers, spoke about the inspiration behind the song, written as a tribute to ARMY, who the group hasn't been able to see in-person at concerts in over a year. Then the septet switched locations again to perform the guitar-led "Life Goes On," sporting matching khaki suits in a grand room with high ceilings and blue curtains.

Back in the gray suits, BTS moved into a large warehouse space to cover Coldplay's "Fix You." The group detailed that its members have found comfort in the song during the ongoing unprecedented times caused by the pandemic, and they hope that their performance can do the same for fans. Finally, the boys took to a recording studio-style room for a rendition of their upbeat #1 Billboard Hot 100 hit "Dynamite." This time, they were dressed in all-white suits and seated close to one another, surrounded by Gold and Platinum record plaques and their six Video Music Award Moon Person trophies.

Ending the set, member Jungkook shared a heartfelt message with the group's fans: “First, we miss you, ARMY, so much! We look forward to seeing you again, and until then, we will continue to stay by your side this year with good music.”

More like this
Everything You Need To Know About ‘Black Panther: Wakanda Forever’
By Bustle Editors
Ed Sheeran’s Surprise Gig Included An Iconic Britney Spears Tribute
By Bustle Editors and Darshita Goyal
‘RHOSLC’ Star Jen Shah’s Arrest & Legal Drama, Explained
By Brad Witter and Jake Viswanath
A New 'And Just Like That' Table Read Pic Confirms A Key Character's Return
By Jack Irvin and Grace Wehniainen
Get Even More From Bustle — Sign Up For The Newsletter