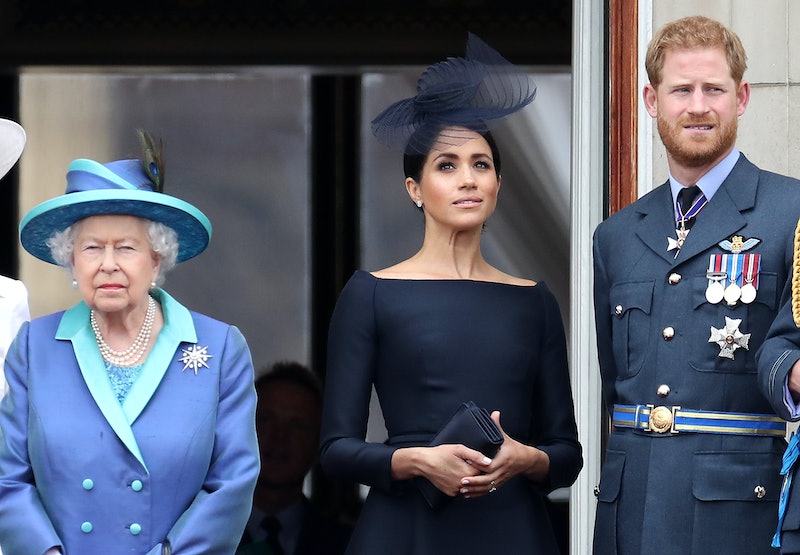 Days before Meghan Markle and Prince Harry are set to speak with Oprah in a tell-all interview, things between the couple and royal establishment are getting even rockier. It was announced on Mar. 3 that Buckingham Palace is investigating bullying accusations made against Markle in U.K.'s The Times. The royal household released a statement following claims that the Duchess of Sussex bullied an adviser two years before she exited her senior royal duties in 2020.

“We are clearly very concerned about allegations in The Times following claims made by former staff of The Duke and Duchess of Sussex,” the statement, released via royal reporter Omid Scobie, began. “Accordingly our HR team will look into the circumstances outlined in the article. Members of staff involved at the time, including those who have left the Household, will be invited to participate to see if lessons can be learned.” Buckingham Palace's statement continued, “The Royal Household has had a Dignity at Work policy in place for a number of years and does not and will not tolerate bullying or harassment in the workplace.”

The Times report, published on Mar. 2, details accusations stemming from an October 2018 complaint made by the Sussexes' communications secretary Jason Knauf. In the correspondence, he alleges Meghan bullied two staff members out of their jobs at Kensington Palace. Notably, Knauf is now chief executive of the Cambridges' Royal Foundation — a charity that supports the efforts of Prince William and Kate Middleton.

Meghan and Harry's spokesperson denied the bullying accusations and released the following statement to The Times:

"Let’s just call this what it is — a calculated smear campaign based on misleading and harmful misinformation. We are disappointed to see this defamatory portrayal of The Duchess of Sussex given credibility by a media outlet. It’s no coincidence that distorted several-year-old accusations aimed at undermining The Duchess are being briefed to the British media shortly before she and The Duke are due to speak openly and honestly about their experience of recent years.

In a detailed legal letter of rebuttal to The Times, we have addressed these defamatory claims in full, including spurious allegations regarding the use of gifts loaned to The Duchess by the Crown.

The Duchess is saddened by this latest attack on her character, particularly as someone who has been the target of bullying herself and is deeply committed to supporting those who have experienced pain and trauma. She is determined to continue her work building compassion around the world and will keep striving to set an example for doing what is right and doing what is good."

Sources close to Meghan told Vanity Fair's Katie Nicholl that the Duchess is "incredibly upset" over the bullying claims. "What I read in the Times is not the person I know," a friend of Meghan's explained to the outlet. "I think it reinforces why they chose to sit down with Oprah. They feel they’ve not had the opportunity to tell their side of the story."