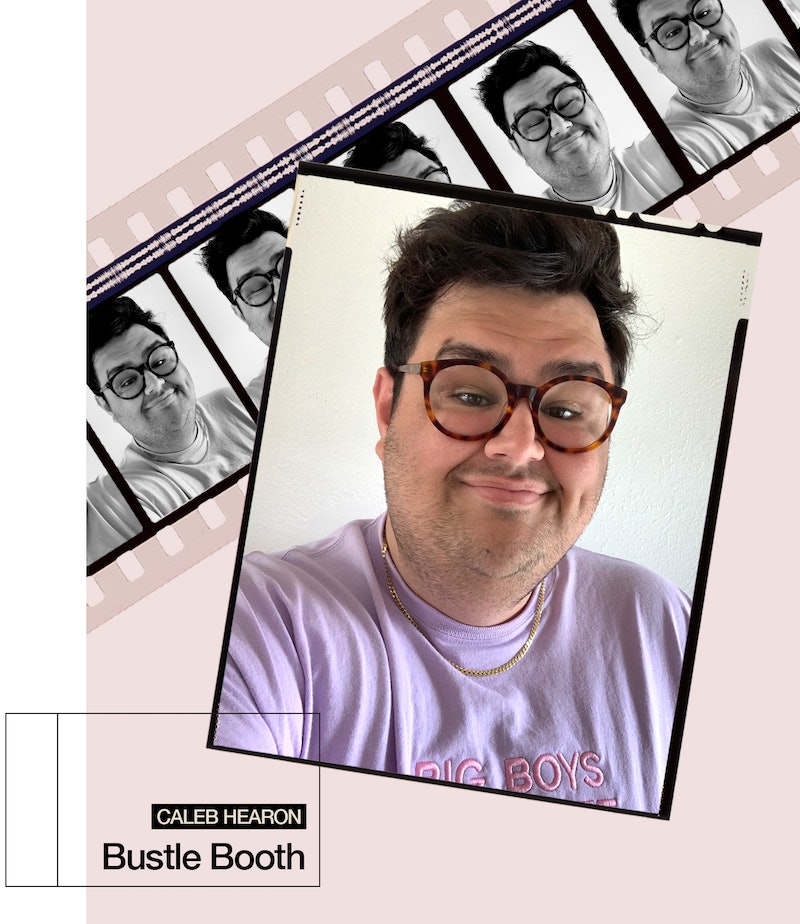 Whenever comedian Caleb Hearon gets mildly annoyed at his friend Caitie Delaney, he sends her a voice note pretending to be Truman Capote in an interview, reflecting back on why their friendship ended. “I’ll be like, ‘I met Caitie Delaney in the summer of 1945. We were close until the fall of 2020, when we fell out of touch because I asked her to get donuts with me and she was busy,’” the 26-year-old tells Bustle, contorting his voice to fit Capote’s distinctive high-pitched lilt.

It’s these kinds of niche impressions that have endeared Hearon to nearly 200,000 fans on Twitter, where he posts character videos like the one that went viral in late 2019: a one-sided depiction of an office worker recounting a wild weekend with a member of the company’s marketing team to another colleague over FaceTime.

When the video (later turned into a Twitter series) blew up, Hearon was working as an administrative assistant at an ad agency in Chicago. Growing up in a small, conservative Missouri town with a single mother, not a lot of money, and an older brother who was “kind of a problem,” Hearon wanted to be a “capital G, capital K Good Kid” to make it easier on his mom. He poured himself into academia, studying sociopolitical communications at Missouri State and making plans to go to law school. But eventually, it became untenable. “[In my sophomore year of college] I got super depressed. I was ignoring what I really wanted to be doing, so it was like, ‘Are you just going to keep doing stuff you don’t like forever or are you going to do something that’s probably stupid, but fun?’” Hearon recalls.

He’d been nursing a comedy career on the side for years before his Twitter videos caught on, but the newfound attention enabled him to pivot into the field fully. He moved to Los Angeles in 2020, where he got a job writing for the upcoming animated series Human Resources, a spinoff following the Hormone Monsters from Netflix’s Big Mouth. “I always felt like I needed to be a very specific type of person to succeed in the writers’ room,” Hearon says. “[But] really, a lot of writing comedy is bringing your own perspective to the table and being like, ‘This is what I think is funny and this is who I am.’ They hired you because they like you.”

Hearon also launched a podcast, Keeping Records, with his friend and fellow comedian Shelby Wolstein. Inspired by a NASA rocket containing a time capsule of sounds and images sent into space in 1977 with the intention of aliens finding it and learning about Earth, he and Wolstein interview guests about what they’d include in their own capsule — and the one thing they wish they could erase from the history of humanity forever. Hearon’s picks change weekly, but for today, he says all of The Chicks’ albums, the movie 20th Century Women, and some kind of book explaining where we went wrong as a society. “If I were an alien I think that would be helpful, because if I came to Earth I’d be like, ‘Damn, what the f*ck is going on down here?’” Hearon says. The one thing he’d get rid of? Elementary school track and field day. “It was so stupid to me that they would force us to spend a whole day basically at a mock Olympics. I don’t want to throw a javelin. I have other things going on.”

Get to know more about Hearon — including his very specific coffee order — in the Bustle Booth questionnaire below.

I’m pretty religious about this. Venti iced caramel latte with blonde espresso. Yes, I go to Starbucks. They're everywhere and I like building my points. Can we please just let me have that?

I don’t have any. Most of the time I leave the house completely unaware of what the weather will be and then I get mad if it rains or I’m too hot or anything like that. Fixing this would be soooo easy and yet I refuse.

I’m an Aquarius, babe. And if anybody reading this wants to tell me what that means I would welcome it.

In my own life? For me, personally? Between me and my loved ones? Julia Roberts in Pretty Woman: “Big Mistake. Big. Huge.”

I think maybe when I was really young it was Land Before Time. All of the kid dinosaurs were queer-coded, by the way. But mostly when my friends were getting into Spongebob and stuff like that I was watching dramatic films with a Strong Female Lead.

The Righteous Gemstones. Danny McBride is a genius. I keep saying this in interviews kind of hoping he will reach out.

Idolizing celebs is over. But we love and respect Natalie Maines in my house.

I would be a judge on American Idol or America's Got Talent. I would be tough but fair. People would respect my taste and approach.

I’m grabbing a friend and we’re doing “All My Life” by K-Ci & JoJo.

I feel like I’ll be put in front of a Corny Tribunal if I say “my friends,” so I’ll say the second thing that came to mind — Ms. Lauryn Hill’s MTV Unplugged album. Especially the interludes.

Something simple. Maybe, “He’s one of the funniest, warmest, and most righteous people to ever live and I would commit serious crimes for an opportunity to make out with him.”

More like this
'Wakanda Forever' Is Already Opening Doors For Mabel Cadena
By Grace Wehniainen
In 'The White Lotus,' Leo Woodall Gets His Moment
By Gabrielle Bondi
What To Know About Simon Guobadia’s 3 Ex-Wives & Children
By Brad Witter
Watch The Gripping First Trailer For The 'Harry & Meghan' Netflix Doc
By Jake Viswanath
Get Even More From Bustle — Sign Up For The Newsletter