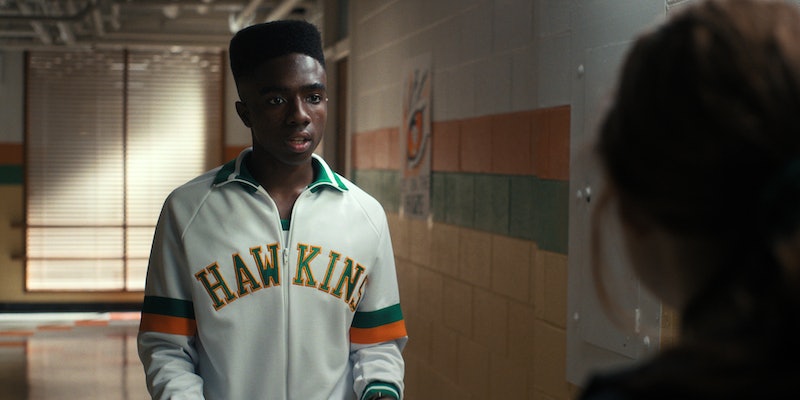 Racism in genre fandoms is hardly a new phenomenon, and Caleb McLaughlin is the latest actor to acknowledge misconduct from fans of the Stranger Things series.

At the Heroes Comic Con Belgium convention, McLaughlin — who is a Black actor and portrays Lucas Sinclair in the Netflix series — spoke at length about how he was treated differently from his Stranger Things co-stars both in America and abroad. “My very first Comic-Con, some people didn’t stand in my line because I was Black,” he recalled. “Some people told me, ‘Oh I didn’t want to be in your line because you were mean to Eleven [Millie Bobby Brown].’” Bustle reached out to Netflix for comment and did not hear back at the time of publication.

He went on to explain that the fan behavior hasn’t really changed in the years since the show’s 2016 debut, even as the Netflix series is gearing up for its final season. “Even now some people don’t follow me or don’t support me because I’m Black. Sometimes overseas you feel the racism, you feel the bigotry. Sometimes it’s hard to talk about and for people to understand, but when I was younger it definitely affected me a lot...it definitely took a toll on me as a younger kid.”

McLaughlin got his start on the series at age 14 and quickly noticed that his fanbase drastically differed from that of his co-stars — especially when it came to social media followings. He’d find himself wondering, “Why am I the least favorite? The least amount of followers? I’m on the same show as everybody from Season 1.” It wasn’t until his parents stepped in to share the “sad truth” that his race was at the core of the discrepant behavior that he realized how deep it ran.

Now, McLaughlin is on a mission to use his status for good. “With my platform I want to spread positivity and love because I do not give hate back to people who give hate to me.”

In 2022 alone, studios, networks, and cast members from films and TV shows in genre franchises like Star Wars, Game of Thrones, Lord of the Rings, The Little Mermaid, and more have defended Black actors and actors of color from online vitriol for appearing in what was considered “white” roles by this contingent of fans.

Most recently Steve Touissant, who appears in the new Game of Thrones prequel House of the Dragon, challenged those fans saying, “they are happy with a dragon flying. They’re happy with white hair and violet-colored eyes, but a rich Black guy? That’s beyond the pale,” while the cast and crew of the Lord of the Rings-set Prime Video series Rings of Power released a statement condemning the “relentless racism, threats, harassment and abuse” aimed at its non-white cast members.

More like this
17 Photos Of The 'Wednesday' Cast Vs. The 1991 'Addams Family' Cast
By Grace Wehniainen
The ‘Emily In Paris’ Season 3 Trailer Teases Major Career & Love Crossroads For Emily
By Bustle Staff
The First Trailer For 'That '90s Show' Includes So Many Nods To The Original Series
By Jack Irvin, Alyssa Lapid and Grace Wehniainen
Elizabeth Debicki On Her Approach To The Most Debated Scene From 'The Crown'
By Grace Wehniainen
Get Even More From Bustle — Sign Up For The Newsletter