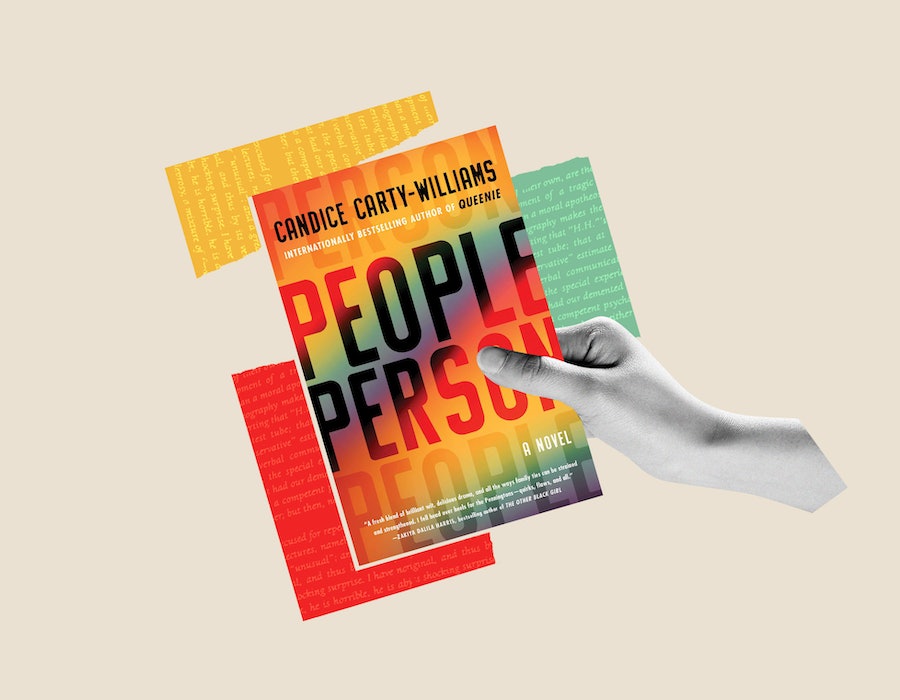 Candice Carty-Williams has only two speeds: on or off. Today, it was the latter. “I was meant to be writing and I was like, ‘It's not going to happen.’ I was in bed and I probably watched over 1,000 TikToks,” the British Book Award-winning author of Queenie tells Bustle. But when it came time to start writing her latest novel, People Person, she was all in. “I put one song on repeat and then maybe four or five hours later I looked up and was like, ‘I've done 10,000 words and it’s 5 in the morning. Well done. Go to bed now.’”

People Person is what Carty-Williams calls her “daddy issues” novel. The book follows the Pennington family, a cadre of five half-siblings — all born to the charismatic absent father Cyril Pennington — who are forced to come together in the wake of a dramatic event. The premise is familiar terrain for Carty-Williams, who is one of nine half-siblings born to a not-so-present dad. As a child, this family structure made her “feel ashamed for no reason,” she says. “But as I got older I was like, ‘There's nothing to be embarrassed about.’” Carty-Williams blames pop culture’s limited view of father-daughter relationships for her early struggles. “We were always taught in fiction and TV shows that this person would be in your life. But what do you do when they're just not there?” People Person provides a welcome antidote, showing that it’s not always alcoholism or some serious problem that keeps fathers from participating in their children’s lives. Some fathers are just like Cyril: apathetic about being a parent.

But as much as People Person is an examination of bad dads, it’s also a celebration of single mothers, from the book’s dedication to the miraculous maternal figures that populate its pages. “People Person is dedicated to all the single moms,” Carty-Williams says, “because I’ve known so many of them and I’ve loved so many of them.”

Below, Carty-Williams talks A$AP Rocky, writing in her underwear, and Marlboro Menthols.

On the rise of social media novels:

I'm reading I'm a Fan by Sheena Patel. The opening line is, "I stalk a woman on the internet who’s sleeping with the same man as I am." It’s literally all about this woman who’s just cyber-watching and is totally obsessed. There’s something about the idea of “stalking.” That kind of woman would be such an embarrassing thing a few years ago, but now people are just like, "Yeah, I do it. So what?" I also just love a social media book because I think [they’re as] fast-paced as our minds are now. I really loved Patricia Lockwood’s latest book, [No One Is Talking About This].

On cultivating her creative space:

I have a custom-made, massive desk. On it, there's plants and loads of trinkets that I fiddle with. I always have my Burt's Bees Lip Balm, which is right here next to me. Sometimes I might have gum, notepads, and to-do lists. It’s also covered in tissues, because I cry a lot.

Then the wall in front [is decorated with] loads of memories. Tickets to shows, posters, postcards people have sent me. If I ever do any events, [I’ll put up] a lanyard from that, or a name tag. I've got some friends who are actors so if they've been in plays, then I've got their flyers up. It's like, "Look at this creative hub that you are around and a part of.”

On moving from writing to editing:

I'm almost always in bed when I write, so I’m usually in a t-shirt and underwear. That’s my writing thing, my body knows. But I can only edit at my desk. I have to be as comfy as possible when I'm writing and I have to be quite rigid when I'm editing because it's like, "Focus."

I listen to lots of hip-hop, U.K. rap, grime, A$AP Rocky, Burna Boy, Little Simz [when writing]. Then sometimes, if I'm editing, I'll listen to the West Side Story soundtrack. I think because I've done that so much, my brain knows that that's time to do different things.

[I’ll procrastinate with] music videos. Drake’s “Find Your Love.” Kool & The Gang’s “Fresh.” I recently got into this singer called Self Esteem, who I would recommend. She has a song called “Moody,” which I think is just very women's anthem of being like, "If I'm moody, that's what it is. Deal with it."

On her daily writing break:

I smoke a cigarette to punctuate the writing day — Marlboro Menthols, which you can’t buy here, so I get them in the U.S. I get a load of them, and I bring them back over.

More like this
Ling Ma Is Back — This Time, With Yetis
By Kate Dwyer
What Joyce Carol Oates Knows About Fame
By Erin Somers
Romance Authors Are Mobilizing For Reproductive Rights
By Natalia Perez-Gonzalez
She Founded American Girl To “Bring History Alive.” Then She Made Over A Town.
By Amanda FitzSimons
Get Even More From Bustle — Sign Up For The Newsletter