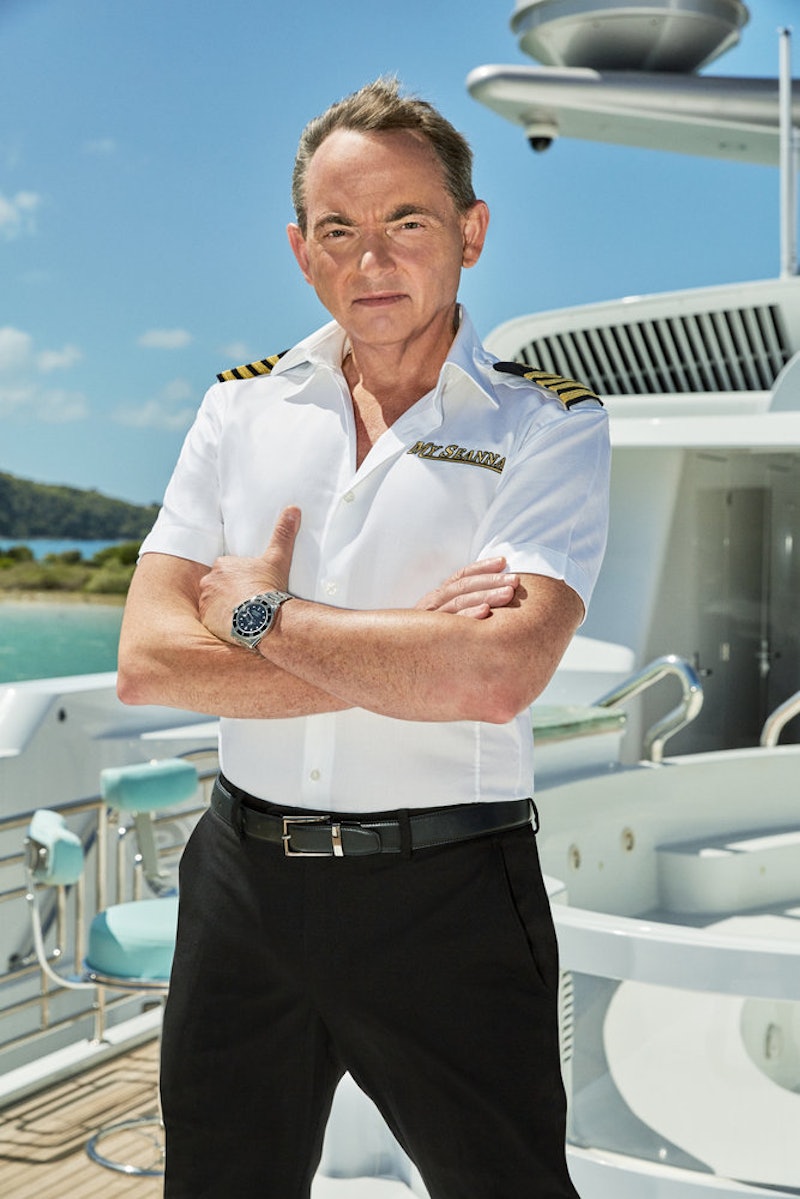 Below Deck Season 9 will introduce a new captain to the ship: Sean Meagher, who briefly took over for Captain Lee Rosbach after a health issue forced him to temporarily leave the show. Initially, Captain Sean was hired to simply deliver My Seanna from Fort Lauderdale to St. Kitts. But when it became apparent that Captain Lee wouldn’t be able to helm the first charter of the show, producers asked him to stay on.

Prior to joining Below Deck, Captain Sean had never seen an episode of the Bravo series. “My opinion was that this is where crew go to destroy their careers and captains go to die,” he admitted to Dockwalk. But after speaking to several My Seanna crew members about their “overwhelmingly positive” experiences, Captain Sean changed his mind.

Going into the show, the the Cape Cod, Massachusetts native said he “wanted to be authentic” and not seem like he was “playing to the camera.” That’s why he still refused to watch the show before filming. “I wanted to go in there and just do what I do,” he told Dockwalk. “Captain Lee is an icon and has been incredibly successful. I knew if I watched him and watched what he was doing, I would subconsciously or even consciously try to emulate that.”

His biggest takeaway? “The show is real. It is actually reality television and there was no prompting.”

Here’s everything else to know about Captain Lee’s temporary replacement.

The Bravo newcomer has been sailing since he was a teen, captaining everything from sightseeing boats to search-and-rescue crafts before transitioning to superyachts. At 18, he became the youngest captain ever at Hyline Cruises, a local ferry company that provides service from Cape Cod to Nantucket and Martha’s Vineyard. His career later took him sailing to the North Pole and jungles in the South Pacific.

In the mid-2010s, Captain Sean made headlines for captaining the MY Latitude on two successful journeys between the Atlantic and Pacific Oceans via the Northwest Passage — something only nine yachts had ever done as of 2017. The achievement earned him the Boat International Voyager’s Award.

In 2016, Captain Sean circumnavigated Svalbard — an archipelago north of Norway — and put the MY Latitude within 400 miles of the North Pole, somewhere no other private vessel had reportedly gone. His journey was documented in a film called The Highest Latitude.

After his tenure on the MY Latitude ended, the lifelong conservationist began photographing wildlife and got into environmental advocacy work. Captain Sean notes on his website that he’s currently involved with Ocean Voyages and their quest to create a plastic-free ocean. He says he’s spoken about the topic all over the world and has photographed plastic in some of the world’s most remote areas. “I would like to lead another exploration via ship to Svalbard and ‘ice in’ for the winter using the opportunity to study and photograph polar bears,” he wrote.

Sailing enthusiasts can book their “next great adventure” with Captain Sean via his Entertainment Factory company. The website notes that he has “never strived to be mediocre or work with people who are,” so he’s looking for individuals and groups that share his “thirst for adventure” and are willing to “push boundaries in destinations, experiences, and design.”

Beyond that, Captain Sean is an active broker for Worth Avenue Yachts and boasts more than $28 million in listings and sales, per the company’s website. In addition to captaining the My Seanna, he was the yacht’s listing broker and charter broker. He’s also working on project Zero, which aims to be the world’s largest zero-emissions sailing yacht.

Captain Sean describes himself as an adventurer, polar explorer, and yacht and charter broker in his Instagram bio, and his feed generally reflects those roles. Among the latest travel destinations he’s posted about are Honduras, Monaco, Mexico, Antigua, and Alaska. He recently documented his trip through the Panama Canal while en route to a Pacific Ocean plastic cleanup. And he also frequently posts his wildlife photography, featuring animals including monkeys, pelicans, turtles, seals, and polar bears.

More like this
Kourtney Kardashian Claps Back At Pregnancy Speculation On Instagram
By Jake Viswanath
'The Great British Bake Off' Has Nuclear Scientists & Architects Go Head-To-Head
By El Hunt and Sam Ramsden
How To Follow All the 'Married At First Sight UK' Contestants On Instagram
By Sophie McEvoy
What’s New On Netflix: Ana De Armas’ 'Blonde' & A Nick Kroll Special
By Arya Roshanian
Get Even More From Bustle — Sign Up For The Newsletter