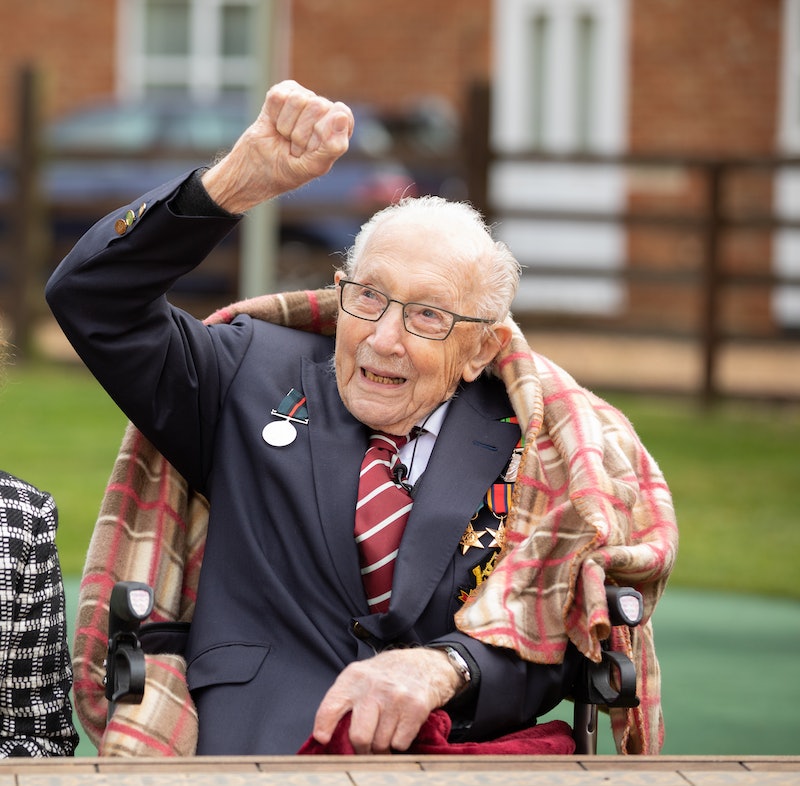 Former British Army officer and lockdown hero Captain Sir Tom Moore was admitted into hospital on Jan. 31 to be treated for pneumonia. Today (Feb. 2), his family announced that the 100-year-old veteran, who won the hearts of the nation with his morale-boosting fundraiser for the NHS, died in hospital of COVID-19.

Captain Tom, who was knighted for his record-breaking fundraising efforts, which raised £33m for the NHS, passed away in Bedford Hospital.

In a statement released by his family, daughters Hannah Ingram-Moore and Lucy Teixeira said: "It is with great sadness that we announce the death of our dear father, Captain Sir Tom Moore.

"We are so grateful that we were with him during the last hours of his life; Hannah, Benjie and Georgia by his bedside and Lucy on FaceTime.

"We spent hours chatting to him, reminiscing about our childhood and our wonderful mother. We shared laughter and tears together. The last year of our father's life was nothing short of remarkable. He was rejuvenated and experienced things he'd only ever dreamed of.

"Whilst he'd been in so many hearts for just a short time, he was an incredible father and grandfather, and he will stay alive in our hearts forever," the heartfelt statement concluded.

Thousands of people have been sharing messages of support over the past few days wishing for Captain Tom's recovery, including Prime Minister Boris Johnson and Labour leader Keir Starmer, but the Queen was among the first to pay tribute to the late hero.

"Captain Sir Tom Moore was a hero in the truest sense of the word. In the dark days of the Second World War he fought for freedom and in the face of this country's deepest post-war crisis he united us all, he cheered us all up, and he embodied the triumph of the human spirit. It is quite astonishing that at the age of 100 he raised more than £32 million for the NHS, and so gave countless others their own chance to thank the extraordinary men and women who have protected us through the pandemic. He became not just a national inspiration but a beacon of hope for the world. Our thoughts are with his daughter Hannah and all his family."

The flag above Number 10 was lowered to half mast in honour of Captain Tom.

Leader of the Opposite Keir Starmer wrote on his Twitter, "This is incredibly sad news. Captain Tom Moore put others first at a time of national crisis and was a beacon of hope for millions. Britain has lost a hero."

In the Houses of Parliament, MP Mike Kane, learning of the news in real time, said: "Some people are born great, some people achieve greatness and some have greatness thrust upon them, and I think Sir Tom was probably all three of those."

Sadiq Khan, the Mayor of London, wrote that he was "heartbroken" to hear the news and said the veteran "will be mourned by millions."

The official Twitter account for the British Army wrote, "It is with great sadness that we have learnt of the death of Captain Sir Tom Moore. An exceptional man and soldier to the end, our thoughts are with his family and friends at this difficult time." The Royal Navy and Royal Air Force also shared their own tributes.

Celebrities also payed tribute. Loose Women panelist Stacey Solomon took to Instagram to share a story about Captain Tom. "We were so luck to have you," she wrote. Elsewhere, Gethin Jones wrote, "Captain Sir Tom Moore. An absolute inspiration, and a true gent. Rest in the knowledge that you won over all our hearts, and made a monumental difference to so many." Piers Morgan called the Captain Tom a "magnificent man."

This article was originally published on Feb. 2, 2021