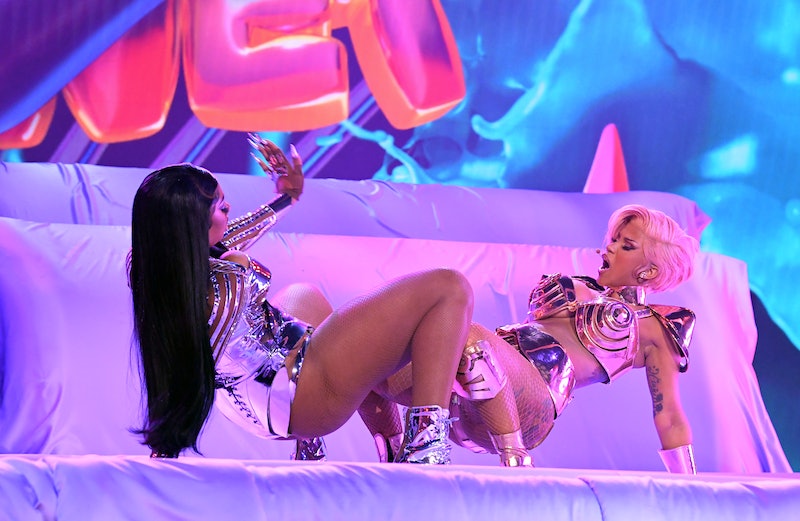 More than six months after “WAP” went viral, Cardi B and Megan Thee Stallion performed the song live for the first time at the 2021 Grammys on Sunday night. The performance wasn’t as explicit as the song itself — they had to sing the clean version for live TV — but Twitter was still living for the rendition. From the high-heeled stripper pole to the oversized king bed, the ladies absolutely brought it.

Megan kicked off their joint performance with a cabaret-style medley of “Body” and her now Grammy-winning smash “Savage.” Although Beyoncé didn’t make a surprise appearance for the “Savage” remix, the rapper more than held her own. Cardi B quickly cut in to give a brief neon-drenched performance of her latest single “Up,” but when the opening notes of “WAP” started, all bets were off.

Cardi started “WAP” by throwing it back to her stripper days and dancing on a high-heel-shaped stripper pole, replacing the controversial lyrics with “wet and gushy” and a simple “wet wet wet.” The clean lyrics didn’t dampen their flows, though, as Cardi and Megan bodied their verses with ease. However, Twitter truly started freaking out when they started doing some of the video’s iconic floor choreography on an oversized king bed, giving fans a Grammy moment to remember.

Although Cardi and Megan couldn’t say certain words on TV, they made up for the “family-friendly” lyrics by providing some salacious choreography atop the oversized bed. And of course, Twitter was quick to provide memes, most of which were celebrating what the duo got away with on live TV.

The Grammys may not have had a live audience for performances, but fans still got a relatable celebrity reaction. Post Malone was on the sidelines for Cardi and Megan’s rendition of “WAP” while preparing for his own performance, and he was very clearly enjoying himself, as any reasonable person would.

It’s safe to say that everyone was Post Malone during that performance.

More like this
Twitter Is Freaking Out Over Rihanna’s 2023 Super Bowl Halftime Show Announcement
By Stephanie Topacio Long
The Trailer For The Whitney Houston Biopic Has Twitter Feeling Heated
By Radhika Menon
Everything To Know About Taylor Swift’s 10th Studio Album, 'Midnights'
By Grace Wehniainen and Jake Viswanath
Lizzo Twerks While Playing James Madison's 200-Year-Old Crystal Flute Onstage
By Radhika Menon
Get Even More From Bustle — Sign Up For The Newsletter