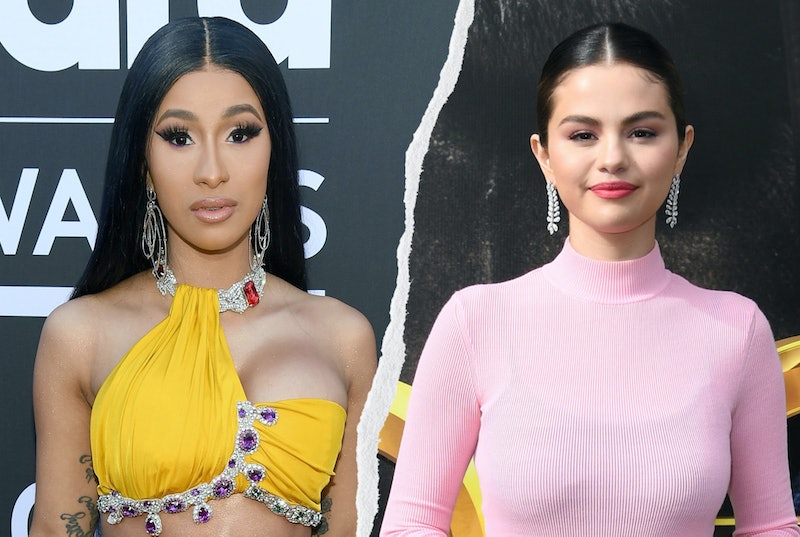 Selena Gomez made headlines and broke hearts earlier this week when she hinted that her music career might soon be over. “I think the next time I do an album it’ll be different,” the pop star told Vogue for the magazine’s April cover story. “I want to give it one last try before I maybe retire music.” Cardi B, however, is among the fans hoping Gomez continues to have a long and successful music career — even if the “Rare” singer is feeling a bit discouraged at the moment.

“I don’t think Selena should retire,” Cardi tweeted on March 11. “She makes good music & her fans love her. I think she needs one more Era. A edgy one that no one ever seen her as. I would love to give her some ideas.” In a separate tweet, the rapper explained why she was speaking out for Gomez. “I defend her cause she is such a sweetheart in person,” the “WAP” artist wrote. “Us celebs get picked apart all the time but she is just to sweet to go thru that. If she wants to leave, leave cause you want too not cause of these f*ckers.”

Unfortunately, it seems the critics have really gotten under the 28-year-old’s skin, and now she’s unsure if she even has a future as a pop artist. “It’s hard to keep doing music when people don’t necessarily take you seriously,” she told Vogue. “I’ve had moments where I’ve been like, ‘What’s the point? Why do I keep doing this?’ ‘Lose You to Love Me’ I felt was the best song I’ve ever released, and for some people it still wasn’t enough.”

Still, the former Disney Channel star knows she has many fans who love her music, and for that, she’s “so thankful.” And although her next album might be her last, Cardi has some suggestions that may inspire Gomez to keep singing for years to come. “A bad b*tch era is needed tho,” she tweeted. “A b*tch I’m nice sweet girl but I’m a rich bad b*tch too.” Cardi’s fans unanimously agreed, with some saying that it’s time for Gomez to have her own “reputation era,” much like her friend Taylor Swift.

While it’s unclear if the “Look At Her Now” singer will take the rapper’s advice, at least she still has more music on the way before potentially retiring. In addition to telling Vogue that she wants to make at least one more album, Gomez has a seven-song Spanish-language EP on the way, which includes her latest single, “De Una Vez.” She also recently collaborated with DJ Snake on “Selfish Love” and Myke Towers on "Dámelo To." Her EP, Revelación, will be released on March 12.

More like this
Hailey Bieber Just Responded To *That* Viral Met Gala Moment
By Radhika Menon and Sam Ramsden
How Ghosts Inspired Kesha’s New Music
By Jake Viswanath
Everything To Know About Taylor Swift’s 10th Studio Album, 'Midnights'
By Grace Wehniainen and Jake Viswanath
Beyoncé’s Special Tribute To Sister Solange Was Both Touching & Hilarious
By Stephanie Topacio Long
Get Even More From Bustle — Sign Up For The Newsletter